Elizabeth Kurtzman has been collaborating with Mark Morris for over two decades. Among others, she created the designs for Morris’s The Argument, Empire Garden, and the more recent A Wooden Tree, whose original cast included Mikhail Baryshnikov. Recently they joined forces once again for Pepperland, a meditation on the Beatles’ game-changing 1967 album Sgt. Pepper’s Lonely Hearts Club Band.

You’ve worked with Mark Morris since the 90’s. What drew you into Mark Morris’s orbit, and what makes your collaboration click?

There is a joyfulness about Mark’s work that I responded to as an audience member. I can look at the same piece again and again and catch something different each time.

My first job with Mark was assisting Isaac Mizrahi on Platee, acting as design courier between New York and the Royal Opera House in London.  It was thrilling to watch the rehearsal process.

A plus for me working with Mark is, he is really good at describing what he wants, in very few words. There is a lot of back and forth via sketching, bits of research and swatches of fabric and color. I like to sketch several ideas. As you get to know someone, you figure out what they like and what they don’t like. It is always a learning experience. I love that.

How did you come up with the visual world for Pepperland?

Mark knew that he wanted simple shapes. No feathers, no satin coats. No recreating the album cover or trying to be faithful to a specific year. I spent days researching street fashion from the early sixties. Fashion was making a statement about the world changing and younger people were a big part of that change. Everybody looked great. There was a lot of energy in the air. There was so much color, new synthetic fabrics and colored tights! I watched Blow-Up (the movie) one more time.

I did have in the back of my mind, a visit from a friend of my father mid-sixties. He lived in London and brought his very cool girlfriend to visit. She was wearing a double-breasted pinwale corduroy suit. Printed stripes. It fited her perfectly, and I thought she was the greatest thing I’d ever seen. I was really little, but I remember it well. Thus, the corduroy suits.

Many of your designs – for A Wooden Tree, Empire Garden, The Argument, Pepperland – seem to be inspired by clothes people would wear in real life: jackets, trousers, skirts. What draws you to that esthetic, and what, in your eyes, does it bring to the experience of watching a dance?

Designs for certain pieces are meant to send you to another time via the clothing. That is especially true for Pepperland and A Wooden Tree, based on the songs of Ivor Cutler. Those designs are meant to paint Mr. Cutler’s world.  Empire Garden was a mix of things, because Mark was talking about layers of ideas that evolved into twisted marching band uniforms. The Argument put the dancers at the end of a night where they may have been at a cocktail party.

Because Mark always has a good idea of what he wants the dancers to look like. That can mean street clothes, or designs that are closer to what we are used to seeing on dancers, and sometimes a combination of things.

You seem to really love color, not just in Pepperland, where the costumes are jewel-colored, but in a lot of your work. Could you talk a little bit about your approach to color?

I am a color junkie. I spend a lot of time moving swatches of fabric around. I think some people are more sensitive to color than others. Purple and yellow together, make me turn green. I love strong color, and while I have been fortunate to do several pieces that are on the bright side, I’ve done all black, all gray and a dance (Dancing Honeymoon) in shades of yellow only.

When Mark and I first meet, he might give me a concrete idea of what color he sees, or maybe a hint. Sometimes it changes.

The Pepperland color palette was inspired by a mural, above what was the Lord John men’s boutique on Carnaby Street. The mural was painted above the store in 1967. It felt like a great place to start. The colors are not quite neon, but they are really 60’s to me. I took out the greens. They made me a little queasy.

You’re a food illustrator as well as a designer. What do the two have in common?

One similarity is color. There is nothing more beautiful than the Green Market in the spring. I love to cook and perhaps you could say there is a design element to cooking. I like to do embroidery and have been known to illustrate food via needle and thread. 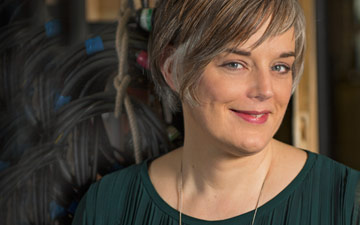