National Dance Company Wales return to the rebuilt Linbury theatre with a triple bill of new works under the title Awakenings. It’s quite mixed evening. The standout item is the final piece, Revellers’ Mass by the company’s resident choreographer, Caroline Finn. It was a pleasure to see the company really get to dance and to dig into the rich movement after two much more minimalistic works.

The first piece, Tundra, by Marcos Morau was the most wilfully austere. It began well with eight dancers (four men, four women) attired in floor length skirts skimming over the stage forming symmetrical patterns. An oblong cordon of light rose up above them. They might have been floating or rolling along on castors, faintly sinister. Then the skirts were discarded so we could see the very jazzy and glittery leotards they all wore.

Morau lined up his dancers and began an exploration of how movement can ripple through the line – from hand to hand, foot to foot. There were some interesting images along the way, notably a rope of arms lifting and twisting (though this has been done before and to better effect in Akram Khan’s Dust). He finds many ways to transfer the movement, with the dancers on their backs, legs in the air, moving from side to side. No one breaks free from the group. It might have been more interesting if they did, but the same idea is reiterated and reworked for the next twenty minutes. This is tough on the dancers because anyone slightly behind or even marginally out of position does become very visible.

Tundra is quite deliberately ascetic and minimalist. Perhaps this is intended to be taken as a rigorous and brave attempt to achieve a hypnotic, trace like effect but it doesn’t come off as such and tries the patience of the audience instead.

Afterimage by Fernando Melo also has a restricted movement vocabulary, but that’s because of the design challenge he has set himself. The dancers get to perform in front of a giant mirror, with their reflections in it at times augmented by ghostly projections of other dancers which might be memories or subconscious desires.

A dancer sits at a square table in front of the mirror. Another dancer enters: a letter is produced and laid on the table. Much of the performance takes place with the dancers seated: it’s their hands flailing at the table and the twisting of the bodies which we are asked to look at. In the reflection, an insubstantial hand comes to seize the letter, or leave other papers on the table.

There’s something of the air of a prison visit about these encounters across the table. There is no overt narrative but an air of neediness and dislocation. No one looks happy. Six different dancers come and go in various combinations, both in the flesh and in the mirror world. The technical trickery is clever, but impressive rather than involving. What the function of the letter might be remains opaque.

Towards the end comes the most notable effect. A woman now lies sleeping on two tables pushed together as a bed. A hall of mirrors is now revealed with the endlessly repeated figure of a different woman in a green dress as her multiplying reflection. It’s image you take away from the show and it is certainly striking. The dance itself however is less so.

It was a relief to come upon full bodied movement in Caroline Finn’s Revellers’ Mass. This is an odd but curiously compelling mash up of a depiction of the Last Supper with a bijou dinner party where the guests get to behave very badly indeed.

The work opens with a man who looks to be a master of ceremonies of some sort lighting thirteen candles on a long table or altar towards the back of the stage. The other eight dancers are clustered together in nervous little groups as if indulging in small talk, including chatting up one of the four mannequins behind the table. The dummies are naked but the dancers are all elaborately costumed. The excellent designs are by Gabriella Slade. The party outfits are in black, gold and red, with much lace and glittery lurex (including a skirt for one of the men).

The dancers group themselves behind the table in poses which reference Leonardo’s Last Supper, with our master of ceremonies in the central Christ position. One man breaks away for a flailing tormented solo where he repeatedly slaps his forehead in reproach. Perhaps he is the Judas figure. We find that the table contains water: the guests wash their hands.

Now the party begins with wineglasses and grapes brandished. But the revellers are a disparate lot, with both anxiety and bravado on view. One woman seems particularly needy, looking for support. Dancers climb up on the table. Water starts to get splashed. Behaviour starts to get more uninhibited. The dancers seize one of the dummies and carry it off solemnly as in a funeral procession, but this then becomes more playful as it is lifted and let fall. Other mannequins are dismembered bit by bit and carried around as if they were sacred relics or maybe just trophies. Different knots of movement are going on at various points around the stage.

The dancing becomes more frenetic and abandoned. It’s good to see the dancers flinging themselves into this so wholeheartedly and having the chance at last to establish themselves as individuals. We have reached that end of party crescendo where everyone is behaving badly, a woman is getting dunked in the water. It’s funny but disturbing at the same time, as if something might go badly wrong at any moment.

We conclude with the clear up after the end of the party. One of the dummies disgorges a pile of sand and pebbles as if it’s the signal to stop. The guests tidy up. Shoes are collected in a cardboard box, dummy parts are tidied away, an unresponsive (human) body is towed off stage. The ceremony is over. There is a madly eclectic soundtrack for this with anything from bells to choral music to Piaf’s je ne regretted rien for that end of party moment.

Caroline Finn certainly has a strong distinct vision and her own quirky and idiosyncratic style. You never feel quite sure what turn Revellers’ Mass will take next but you want to keep watching and it seems to fly past. The audience gave it an enthusiastic reception. More of Finn’s work would definitely be welcome. If she invites you to a party though, you might just pause for thought before you go. 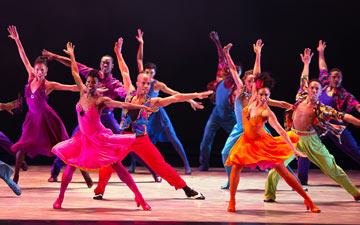