Woman SRSLY’s feminist energy exploded all over the Place last Thursday. The foyer and bar area were transformed into a colourful pink fun-fair. Students from London Contemporary Dance School feminist society ran interactive stalls such as “what cat-call will you get today” or knock the cans of patriarchy. Feminist manifestos and a board to write your visions of feminist utopias were provided to boost the feminist in all of us. As always with Woman SRSLY events, there’s a rowdy experimental atmosphere, a touch of anarchy and masses of good will. With five acts by a variety of women artists in the theatre, blended together by the vibrant resident girl movement band, the Yonis, the evening was full and delightfully unpredictable

Woman SRSLY, formed by artists Grace Nicol, Holly Beasley-Garrigan, Becky Namgauds, Claudia Palazzo, Alice White and Valerie Ebuwa enables platforms for female-identified and socialised female artists, curating evenings of interdisciplinary work which include film, dance, cabaret, theatre and music – all of which focus on female empowerment. What is important about the events they produce is that they are less about individual acts than the evening as a whole. Don’t expect highly sophisticated, polished performances either – this is not what it’s all about.

What I also love is that women clearly run the show: there’s the capable technical team of Woman SRSLY, visible in colourful dungarees working both on stage and behind the scenes; there’s generous compere Valerie Ebuwa, or rather her recorded voice and until she turns up, (at the end, racing across London from another show) Grace Nicol does a pretty good job at introducing each act and welcoming us.

Woman SRSLY’s first guest is Klara Andersson, a singer/poet from Sweden whose melancholic haunting voice is treated through samplers, synthesizers and an electric guitar. At the same time she adeptly manipulates a range of music technology while using a bow to play her guitar. Here she contrasts crunching noises played back through a sampler with lyrical songs and screeching instrumental sections. Flooding the theatre with waves of visceral sound, it’s strangely beautiful.

Next up is Lindy Nsingo’s chat show – a funny yet tragic projection of a woman on the edge. All charm, charisma and personality, Nsingo runs her show, The Lindy Show with a healthy disregard to the conventions of how a celebrity hostess should behave. From topics that include interracial dating to call-ins from lonely viewers, she interrupts everything with hilarious comments or gutsy dance sequences of dancehall and contemporary. Humour turns darker when she finally stages her own break-down, loses her contract for her show and has to be forced off stage by her steadier camerawoman, Amelia Cardwell. Although a bit disjointed, the show exposes Nsingo as remarkable performer to watch.

A strange sketch follows in Lucy McCormick’s Future Sensation in which scantily clad McCormick and two male side-kicks embrace their cave wo/man selves in search of inspiration. In a mess of ritual, rave and understated humour, they litter the stage with earth, funky dancing and comical verbal exchanges. I’m no clearer by the end of it as to what exactly McCormick has found from history but the work has a jaunty Monty Python appeal.

My favourite act of the evening (although I shouldn’t really say so) is Hannah Ballou’s Shhh because of her frank and hilarious display of how a performer juggles new motherhood. The premise for the show is how much Ballou can perform on stage before her toddler awakes. While her daughter sleeps in her push chair centre stage, Ballou tells us about the possible versions of the show, i.e. what happens if she wakes up. Addressing us in whispering tones she talks about the challenges of making a show without money or child-care, deconstructs a baby book called ‘Feminist Baby’ and then sings a song using the lyrics from Adam Mansback’s book for sleep-deprived parents Go the Fuck to Sleep. With a strong stage presence, Ballou skilfully weaves feminist theory, personal testimony and stand-up comedy. There’s even a dance section with loud music where she is joined by dancers Jon Chu and Jason Piper whom she introduces as ‘former dancers but now parents.’ After a sexy little trio, embellished with grand jetés and pirouettes the two blokes lift Ballou high in the air while she pushes the pram across the stage. The glamorous performer in her triumphs over the mother as she flounces off stage leaving her daughter behind, blissfully unaware in her slumber.

The evening closes with Becky Namgauds’ Like Honey, a solo for Amanda Pefkou. An earthy dance act which explores unconventional femininity –  a woman as monster who sucks up power from the ground. Rasping vocals and fractured utterances performed live by Yael Claire Shahmoon extends the metaphor of the unfamiliar, other-worldly flavour of the piece. As Pefkou rises up her hunched body expands into body-popping percussive movements to Shahmoon’s now raucous middle-eastern flavoured singing. Mysteriously detaching a sack of blood from her leg, Pefkou releases her energy in wild and ritualistic actions. Utterly bewildering yet fascinating the work questions how women create power from their bodies, one from her voice, the other from movement.

An unforgettable evening, Wildlife in Strange Waters certainly takes you through some terrain that feels daringly experimental and refreshingly women-centred. 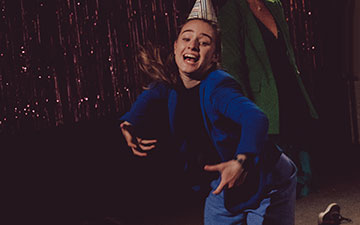 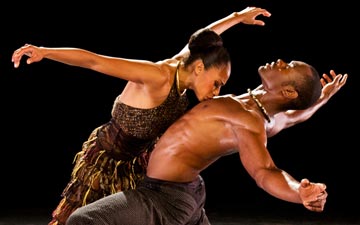 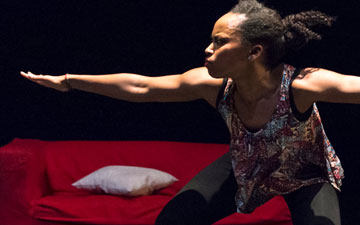 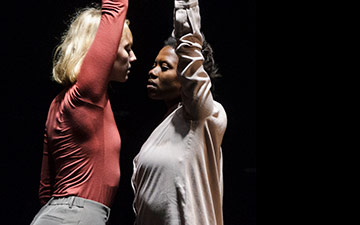 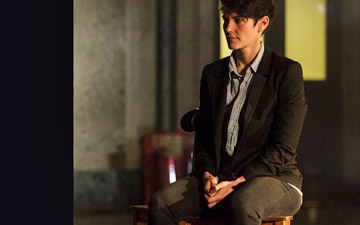