Cas Public’s 9, now at the Linbury Theatre is a curious mix, big ideas but flawed execution. It’s a combination of dance and film, aimed at both adults and children, and takes on the issues of hearing impairment and its impacts, ostensibly referencing both Beethoven and his final symphony and the hearing loss of one of the five dancers of the company. It’s certainly ambitious to deal with all of this in just under an hour, and 9 doesn’t really integrate its constituent parts successfully. The dancers are energetic, committed and capable, but the dance material becomes repetitive and not easily identifiable with the professed theme.

Choreographer Hélène Blackburn founded the company in 1989 in Montreal, and has produced a number of works aimed at children as well as adults, though this doesn’t mean she’s interested in cute or sweet subjects. Here she has collaborated with Belgian youth theatre Kopergietery, and there are four young children on stage alongside the adult performers. The stage is strewn with wooden chairs, some primary school size, other more miniature and some tiny. The teensiest are set up on a table, like chess pieces. The children start stacking the chairs into towers carefully supervised by the adults, who fling bigger ones around more boisterously.

Cai Glover strides to the front of the stage, ceremoniously removes his hearing aid and leaves it on a chair. Five black clad dancers appear in a series of solos and duets, each highlighted by strong spotlights. There’s much business with chairs, thrown around, stacked, then toppled. These episodes are intercut with snippets of film showing a young deaf boy adjusting his hearing aids, expressing his difficulties in following what’s going on around him, isolation and longing to be understood. Dance episodes are intermittently filmed by a toy remote control car which zips nimbly around the stage, with the footage projected onto the screen above. The car provided welcome lively fun: it is used at the close to deliver Glover’s hearing aid back to him.

The dance language is a mash-up of contemporary and classical. Often legs take classical positions, and perform neat jumps, while the upper body employs a kind of urgent, energetic semaphore with wind-milling arms and waggling fingers. At one point the lone female dancer dons pointe shoes for a solo. Dancing is punctuated by much shouting and growling. Performers drop to all fours and howl like dogs. One of the young girls is invited to join in here; understandably she doesn’t look at all keen. Children on stage aren’t given much autonomy, dutifully shepherded around by adults and mostly sit still. Putting children up there without giving them much to do isn’t necessarily a way to appeal to their peers. In the film, other children appear more independent. But though they brandish the same chairs the link between the world of the stage and that of the screen still isn’t convincingly bridged.

A voiceover tells us that hearing loss isn’t like any other disability and specifically not like blindness where everyone can tell you have a problem, so it seems distinctly odd that the female dancer puts on a blindfold and performs a complex duet where she is swung, turned and lifted. If this is an attempt to show the impact of hearing loss it doesn’t convince.

So, what of Beethoven and the 9th? Curiously, despite the many references in the programme, his name isn’t in the credits. Music is listed as by Martin Tétreault. What he has provided is a patchwork of samples where bits of the work surface (tantalisingly) infrequently in snatches, sometimes overlaid with competing noise, though there’s very little of the silence mentioned in the publicity. The programme booklet is substantial for so short a work and is again an odd mix. There are articles about the nature of hearing loss alongside pieces clearly aimed at children like Who was Beethoven? What is a symphony? But don’t expect to get an answer to those questions by viewing the work. The 9th may be lent on quite heavily in the publicity material but feels much less evident in performance.

The commitment of the excellent, likeable dancers and that cheery toy car were the best things about the production. But at nearly an hour it became repetitive. Many costume changes couldn’t conceal the sameness of those spot-lit solos, and there were a series of false endings. The sparse audience were nevertheless enthusiastic.

The Linbury was less than half full and there weren’t a lot of children present. Last month the performances of the wonderful Isango Ensemble there also had many empty seats. Publicity for smaller visiting companies here seems scant. Cas Public are back here next season with Les Beaux dormants. No doubt they hope for bigger things. The Linbury is potentially a vibrant venue: let’s hope it attracts new audiences. 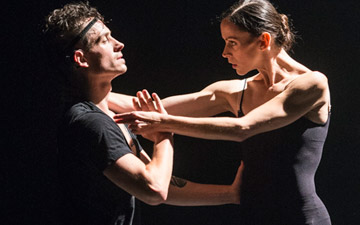 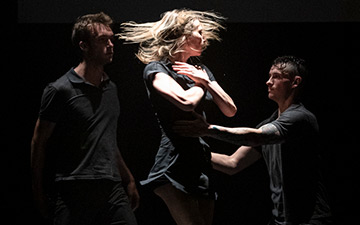 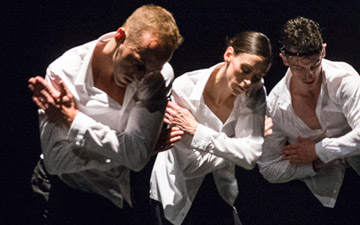