The ORIGINS 2019 festival (11-23 June) marks a decade of Border Crossings, an event that strives to present London audiences with arts and culture from Indigenous peoples around the globe.   The 2019 festival is celebrating Indigenous language, noting that there are almost 200 languages that have less than ten surviving native speakers.

Meeting this objective, Ava Dance Company’s essay on the tribulations of the Inuit people from the northern-most reaches of Canada is appropriately a mix of dance theatre and spoken text; the words in both Inuktitut storytelling and English explanation.  Inuktitut (one of two Inuit languages) is making something of a comeback – now with around 36,000 native speakers – after decades of being repressed in favour of English and French.    One of many things I learned from this educative performance is that the Inuit are an open and welcoming people; in their lingual definitions, each person reading these words is an Inuk (since it simply means ‘person’) and we are all Inuit (‘people’).

This fascinating UK premiere of a transatlantic work has been more than two years’ in the making, a rich evolution that has developed complex layers of insights and imagery that open up all manner of thought-provoking inquiry.  The two principal performers, Naulaq LeDrew and Avatâra Ayuso present many intriguing contrasts.    LeDrew stands for the Indigenous peoples of the Canadian Arctic Archipelago (for me, she also seemed to be a cipher for all Indigenous peoples across the globe), whilst Ayuso represents the empire building that inevitably led to the enforced restrictions on the people whose land had been acquired.

Another important contrast is that while Ayuso is a skilful, mature dance artist, LeDrew is not a professional performer; this being her first production, a fact belied by her confidence, but proven by inexperience. After one energetic dance, LeDrew was so breathless that she could not speak her next line, which led to some momentary corpsing and spontaneous laughter between the pair.

Dressed in traditional clothing, LeDrew is already onstage as the audience files in, kneeling on the floor, apparently in the act of preparing a meal, slicing fish with an unfamiliar semi-circular knife.   A large rectangular block of ice sits in the middle of the stage.   When the audience is settled, Ayuso enters, abruptly, staggering backwards, wearing a formal black dress and high-heeled shoes.  It seemed a blunt metaphor for how supposedly sophisticated explorers and invaders blundered into the simple lives of Indigenous people.

The early physical exchanges were initially those of wonder, awe and suspicion.   This initial tension was temporarily relieved when a large (thankfully, plastic) fish fell from the flies and bounced off the ice.   Perhaps this signified the rich natural resources of the invaded lands and in a subsequent metaphor for the environmental destruction wrought from the exploitation of these resources, Ayuso brutally smashed the ice to smithereens, demonstrating exhausting physical strength and stamina, with shards of the frozen stuff flying everywhere.

A strangely incongruous group of six young women, dressed in contemporary, casual clothing, arrived to clear up the mess, sweeping away the ice with brooms (clearly reminiscent of the sport of curling) and mopping up pools of water.   These six performers – from Slough’s Creative Academy, where Ava Dance has been an Associate company since 2014 – added a fresh and discordant element of humour as well as providing a reference to the contemporary culture of social awareness.

Midway through the work, Ayuso read from the UN Declaration on the Rights of Indigenous peoples, which provoked an angry response from LeDrew.   “We are not savages”, she shouted repeatedly, perhaps referencing the allegation that Indigenous peoples were not consulted or engaged in the drafting of the Declaration.  During the course of No Woman’s Land (a brilliant title) we learned that state-induced alcoholism has become a dreadful blight on the Inuit.  Le Drew fled her homeland (leaving two children behind) to escape the curse.

Ayuso is Mallorcan and there is a meaningful interchange of Inuit and Catalan cultural identities.   She donned a stylised wicker bull’s head, dancing in a ring of rope; LeDrew stalked her as a hunter, throwing an imaginary spear that killed “the bull” and then she “skinned” it by peeling Ayuso’s tight dress over her head.  In one of the funniest segues ever in dance theatre, Ayuso immediately morphed into a bathing beauty on a beach, preening and posing seductively to a cheesy song about the Mallorcan sun.  In a funny introduction that contrasted the lives of the two protagonists, LeDrew had explained that she doesn’t like the Arctic temperature to fall to -45º while Ayuso hates Mallorca when it reaches 45º!

The return of the six young women heralded a deliberately inconclusive end (the cast split into pairs playing cat’s cradle, one of the world’s oldest games, familiar across the globe).  It seemed like an effective way of declaring that there is no end to the interlaced issues of feminism, nationalism and imperialism that are confronted by this intriguing work. 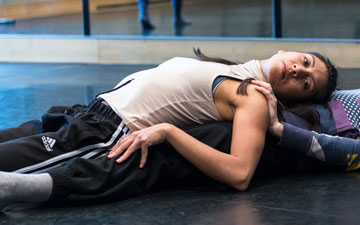 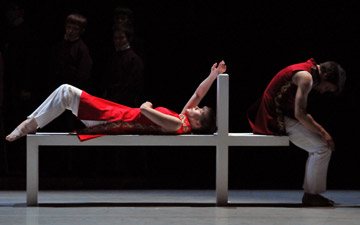 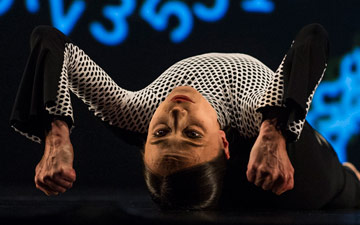