David Bintley’s dedication for Hobson’s Choice reads “For Madam – an ‘English’ ballet” – and by gum, so it is. From the music-hall jauntiness and nursery rhymes that pop up in Paul Reade’s score, to the references to Frederick Ashton ballets, to the “how dos”, flat cap, cups of tea and Salvation Army diverstissement, this is English through and through. Created in 1989, it’s an adaptation of Harold Brighouse’s play of the same name, drawing most strongly from David Lean’s 1954 film version starring Charles Laughton, and is brimful of affection for its source material.

All the elements come together perfectly for this three-act ballet – the storyline, the dance, the music and the sepia-tinged set design – and as such it was a fitting way to mark the end of Bintley’s time in charge of Birmingham Royal Ballet. On opening night, the cast were on splendid form too.

The story is one of pitted wits and blossoming romance. Curmudgeonly, permanently sozzled Salford boot shop owner Henry Hobson takes his success, and the free labour he demands of his three daughters, for granted. He refuses to let his youngest two – Alice and Vickey – marry their suitors, and laughingly considers 30-year-old Maggie to be on the shelf. Maggie has very different ideas, however – and they involve leaving her tyrannical father and making off with his talented, diffident boot hand, Will Mossop.

Bintley’s gift for characterisation shines through here. Jonathan Payn had immense fun as Hobson, his drunken reeling and pratfalls (Bintley’s nod to Laughton’s exaggerated physical comedy in the film) balanced against his mercurial temper and seething impotence in the face of Maggie’s determined battle strategy. Samara Downs’s Maggie was an automaton of efficiency, but when the cracks in this façade showed through, you ached for her. And Lachlan Monaghan’s Will grew in confidence even as he still marvelled at his precipitate rise up the social ladder – from a boy with dirty hands working in a cellar, to the proprietor of a shop. His clog dance round the shop – reprised later in the production – was a thing of pure blissful elation.

The bumpy relationship between Maggie and Will – started by her merely as an escape plan and business transaction, but slowly growing into love and respect – was charmingly captured in their duets. There was always an undercut of no-nonsense realism, though; their big wedding night pas de deux, for instance, ended with Maggie yawning. The duets between Maggie’s sisters and their beloveds also added healthy doses of humour (Mathias Dingman’s socially inept Fred Beenstock pursuing Laura Purkiss’s Vickey was a particular highlight).

Meanwhile, the whirl of sets and company dancers kept a bustling pace to the production – the ensemble dancing in Act II, as the lovers took a Sunday afternoon turn in Peel Park, was a delight. Big-hearted, whimsical, suffused with equal parts romance and drollness, Hobson’s Choice is a gem of the BRB repertoire – long may it keep being revived. 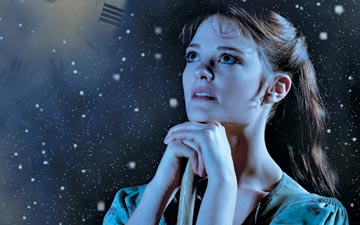