It was quite an experience to watch the extraordinary dancers of Le Ballet de L’Opéra national du Rhin, pace their way through Hélène Blackburn’s Les Beaux dormants (The Sleeping Beauties). It’s a brave concept – the theme of birth, childhood, adolescence, adulthood – all in parallel to that of the traditional (The) Sleeping Beauty and Aurora’s one hundred and sixteen year journey to her wedding day. Interestingly, The Royal Ballet are currently reviving the classical version upstairs in the main house.

In reality, the connection is extremely loose. This is a fifty minute performance without interval, during which the audience struggle to keep up with any kind of narrative reference and yet marvel at the speed and strength of a vibrant cast of 12 dancers. There is a wall at the beginning, made up of a series of three-sided panels: one plain, one with rose stems swirled over it and the last with an overgrown forest. These panels are split and maneuvered by the dancers to provide entrances and exits, backdrops and places to lean on. Once we have witnessed a series of filmed projections of children being interviewed on what constitutes being a princess or prince (charming in their innocence), the cast starts to walk between the panels. Men and women are dressed in dark suits, some wear high heels, others soft shoes. The walking turns to running. One man has a high heeled shoe perched on his shoulder. The specially commissioned score, by Martin Tétreault, hints at Tchaikovsky’s Prologue and after the narrator tells the story with rapid action mime and vocals, the cast starts to pick up its stride. To say that the movement is frenetic is an understatement. It reminded me a little of Marco Goecke’s unusual style of choreography, where you sit and wonder how on earth the dancers remember what they are doing with this ‘blink and you’ll miss it’ vocabulary.

Blackburn actually has a strong individualism, her voice is uniquely her own. However, as the score spat out sections of the Garland Dance in Act I to be drowned out by thudding beats and a cacophony of other sounds, I started to lose the connection between what the dancers were doing, any kind of theme or any confirmation of who was which character (as they were named in the programme). Phrases were unrelentingly frantic and frenzied. Many passages were tremendously engaging and quite frankly, a feat of enormous stamina. Sometimes the dancers were in perfect unison, (quite how I’m not sure) at other times there were so many activities in different parts of the stage it was difficult to know where to focus. Sections of duets were fascinating; Ryo Shimizu delivered a stunningly airborne solo; Monica Barbotte was wonderful throughout, no matter who she was dancing with or even on her own. It did not register at the time that Valentin Thuet was Carabosse. It was hours later that the penny dropped, but he was magnificent with his one pointe shoe on, one off. Indeed, the dancers switched their footwear and costumes at the same speed with which they danced. I finally worked out who Lilas was – the man in the lilac T-shirt! He wasn’t adorned in this throughout, which perhaps threw me. His rather repetitive hand and arm movements suggested that he was in possession of a gun which he frequently blew as if having just shot someone. Meaning what? I had no idea who Aurora and the Prince were either as there was plenty of kissing going on, but the pointed reference to one girl lying on a bench prostrate and a man kissing her hand finally clinched it.

Allusion to any kind of childhood and adolescence did not really translate to the audience but nevertheless Blackburn’s Beauties did at least have something to say, even if at times it was baffling. I’m afraid the ‘music’ left me cold. It was very difficult to tolerate. If one is going mash up one of Tchaikovsky’s most beautiful ballet scores, give us something pleasing or interesting to listen to. No doubt some in the audience will have thought it was genius, but let’s just say it is not for the fainthearted. However, I cannot praise the dancers enough for their commitment to the task at hand. 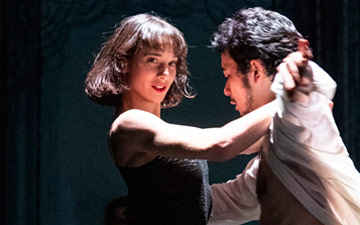