The market for circus-based theatre is booming but although each show has its own angle most are variations on a theme that allows the cyr wheel, trapeze or teeterboard to come into play. So, hats in the air for these five guys from France, collectively known as Galactik Ensemble, for coming up with something new, which requires nothing but their own ability to dodge things and stay alive! They have termed their art as ‘situational acrobatics’, which means that heavy things drop from the sky (well. OK, the flies) and the guys only just get out of the way. I would say that situational acrobats are what we might otherwise describe as daredevils.

The precis for the show is how man survives in a hostile environment and there is no denying that their mutual capacity to avoid being clobbered required superhuman dexterity, Olympian reactions and precision timing. It also frequently involved a great deal of humour as the men stretch, roll and bend to marginally avoid swinging machinery and falling bags and masonry. That the infectiousness of the humour went viral was largely due to a young boy in the audience with his own virtuoso giggling skills. The promoters should seek him out and sign him up for every show.

But – and you know there has to be a but – no matter how clever, funny and unusual this situational acrobatics might be, it is also quite a one-trick pony no matter how you vary the items that fall and the way they are dodged. Inevitably, the audience finds itself second-guessing which clunky item will fall next.

To be fair the creative team – who also happened to be the performers – did their best to mix things up. A long opening section occurred before anything fell from above with moving panels acting like a magician’s hands covering and uncovering the different members of the ensemble. A panel would pass one man and in an instant another took his place: two men would suddenly become a different trio; and men would be “deposited” one by one like shuffled playing cards and then be gathered up again by the passing panels. This all went on too long and I was eagerly anticipating a woman to suddenly appear as the obvious coup de théâtre, but unfortunately this trick was missed.

To liven things up, one skinny guy had his clothes whipped off (twice) to be exposed in baggy white schoolboy y-fronts; the men threw papier mâché missiles (like tiny snowballs) at each other (and into the audience); one guy fell off the stage; and tennis machines spewed out balls as fast as Djokovic serves (not all of which were dodged): one splatted a forehead at speed, genuinely knocking the acrobat off his feet. It approximated a particularly aggressive paintball game!

Other variations included one of the situational acrobats being gathered up in a huge polythene sheet and hung several metres in the air, like a captured beast, where he eventually extricated himself by making holes in the plastic. A sequence where an acrobat dropped from the flies to land on a table held precariously up in a presage lift by his mates was an extraordinary feat of timing and balance; a trick so good it was later repeated for landing on a chair.

Each acrobat had a distinctive personality with charismatic appeal but this was a show where the backstage team deserve a special tribute since the set construction (Franck Breuil) and Technical Direction (Victor Fernandez) were vitally important and two additional credits were for “Outside Eyes” (Matthieu Gary and Marie Fonte). I have no idea what they did but I’m sure that it was critical to the five guys’ safety.

Optraken premiered in 2017 and familiarity clearly accounts for the slickness of timing that helped to make much of the work seem improvised. It was brought to London as part of the 2020 International Mime Festival, one of few things that make January seem worthwhile. 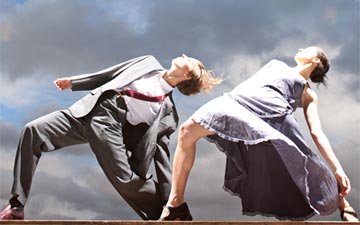 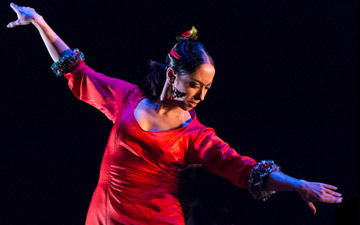 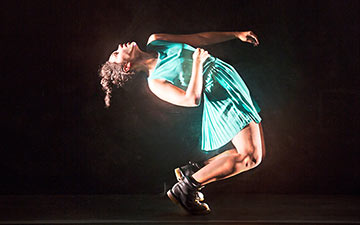 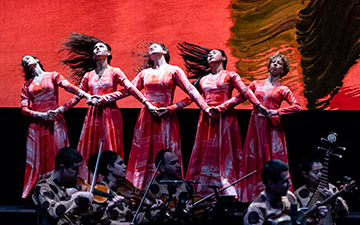