Sketch Dance Company
To Have and to Hold
★★★✰✰
Streamed as part of Brighton Fringe Festival
1 – 31 October 2020
www.facebook.com/sketchdc
www.brightonfringe.org

To Have and To Hold is a new dance film by Sketch Dance Company, choreographed by Jasmine Andrews and filmed by Adam Biko, which premiered as part of the Brighton Fringe Festival and remains available to watch, for a small fee (£3.50/£5.00), until 31 October.

This challenging 40-minute work is well worth perseverance since what at first seems a collection of random acts, builds together into a coherent enquiry into the process of being; and in particular, how humans are influenced through the relationships they form, using a contrived representation of the family unit, with three young women representing both parents and child.

These intentions are set from the beginning through a voiceover of poetry that asks the important questions (starting with “Who am I? Who are You? I seek to find the old amongst the new….”). This poem, by Jordan Cadogan, enhances the choreographic intent by making it clear that our personal evolution generally begins at home “…in the kitchens, bedrooms and gardens alone,” which accounts for the simple domesticity of the work’s suburban setting; beautifully integrated around an original musical composition by Andrews in collaboration with Sheree DuBois who supplies the haunting sung vocals (Caitlin Taylor owns the arresting silky voice that delivers Cadogan’s spoken text). The film spins magical moments out of entirely ordinary circumstances through a tight integration of these creative contributions.

Andrews was herself influenced by the theories of Erik Ericson, a German-American development psychologist known for his eight-stage theory of human development, which Andrews follows in its linear form, even to the extent that stages of her choreography are uneven in terms of time (the first four fly by in just twelve minutes, surpassed in length by Stage 5 alone).

To Have and To Hold is performed by an engaging trio – Claire Hackston, Francesca Lista and Ema Thomas – exploring Ericson’s concept of influence within a familial setting through those eight sequences of psychosocial development. After a unified opening – filmed outside against a whitewashed brick wall – danced to the words of the poem, the trio perform Stage 1 in a small living room, which apparently represents discovery. Biko’s camerawork is close-up; focussing on individual body parts – an eye, a hand – and the three dancers are never all completely in shot together. The familiar refrain of the opening of Swan Lake is played over the soundtrack by a single hand on piano keys. The whole effect is intense, intimate and surprisingly unsettling.

Stages 2 and 3 quickly run into each other, opening with the movement energy pulsating through the bodies of the parents (Hackston and Lista) dancing a duet in the kitchen; Andrews’ choreography being well suited to a duet in this tight space. Stage 5 has Hackston performing alone to gentle music in a walled garden and the emphasis on solos continues with Lista performing in a park, in front of a lake, bringing the continuity problem of two unruly ducks, developing a transient interest in the performing human! They are literally there one second, and gone the next! As if inspired by this “magic” the performer also switches identity with Thomas finishing this long solo, which lies at the heart of the work.

Hackston represents a nurturing figure while Lista is the more disciplined parent and Thomas, the child who absorbs their influences. I must confess that I understood little of this intention when initially watching the work but having read the choreographer’s intentions it all came together on a second viewing, which is of course the great advantage of digital platforms.

Stage 6 finds Hackston and Lista performing together in a bus shelter and a sensual aspect of touch emerges into their duet, suddenly morphing into the bedroom as each performer removes the other’s outermost layer of clothing (tastefully observed) before they wind themselves together on both the floor and the bed, feet and hands touching.

The music picks up pace for Stage 7, which develops into a trio on grass in front of suburban houses (I couldn’t help but hope that it had been adequately scoured for dog mess before the dancing started)! The music stops abruptly and the three dancers return to perform to more poetry, in front of the whitewashed walls, leading to the brief apotheosis of Stage 8, back in the living room, again performed by the trio working the dense choreography, largely in unison.

The intimacy achieved by close camerawork was always absorbing and Andrews’ breadth of choreography, even within restricted spaces, was complex and comprehensive. I first saw Sketch Dance Company during the Resolution Festival and it is great to see that Andrews is stepping up to the next level with a work that is both challenging and enjoyable. 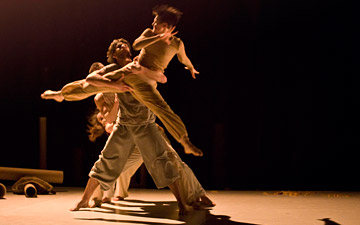