The disco ball stops spinning, but the glittery light still bathes the stage. Composer and songwriter Finn Ronsdorf steps away from his piano in the silence, looks up to the imaginary stars, drops to the floor and folds his hands behind his head. He gazes up to imagine, to dream. Blackout. The dancers and composer bow with choreographer Antonin Rioche and his assistant, celebrating a work realized, a dream realized, a life realized. And I, from my couch, slowly began waking from a pleasing anesthesia.

Glitter, the first evening-length show by Rioche, produced by Korzo and Nederlands Dans Theater and presented during CaDance Festival’s 20th edition, is a story – a full novel, a memoir – of dreams, of the love that supports them, of consequential fame and recognition and every subtle nuance between illusion and reality, all told with depth and humor.

Cue the prologue. Old memories of the beginnings, with early video footage of the performers – Toon Lobach, Grace Lyell and Ève-Marie Dalcourt – as children at the piano fittingly singing lyrics “I’m a dreamer” or dancing in their living rooms, all with abandon. No fear, no shame, no doubt.

Coming into focus onstage is Dalcourt in a strappy red sequins long dress and red heels, acknowledging her applauding audience, radiating energy as she moves from one side of the stage to the other, waving, pointing, full of childlike glee. Has she just finished performing? Has she just entered the stage? It doesn’t matter. She is basking in the ecstasy of validation. “Thank you so much for all being here tonight. All these people just for me?” as her hand covers her heart.

She turns introspective, sharing with us her belief it would never happen, she’d never have her chance, didn’t have what it took. We’re with her in reality, our own hands on our hearts for her, for many have lived this story, too. But she quickly shifts to performer, disconnecting from us to her other reality, thanking her adoring audience, hungrily gathering like a drug the roses thrown onstage.

Anchoring the set is an upright piano, with a microphone and stand, and a little side table holding a record player. The message is clear ­– music and dancers are equal. The stage is but a music box with Ronsdorf winding it up through each scene. He is always visible, taking on the role of omniscient narrator whether reciting Rioche’s texts or delivering driving lyrics or moving with the dancers. He approaches his piano in white billowy pants and top, barefoot, plays a few notes, and slides his neck up the microphone arm. “I guess now we can start,” he says with an air of wisdom. “Everyone is part of this story. Or better, everyone is this story.”

The pages begin turning, and with so many themes, images and memories pouring out, the work could have easily slipped into an everything-but-the-kitchen-sink feeling, but its framework held. Rioche shared in a pre-show interview that the idea for this work began five years ago and that was evident – it’s tightly woven. Where connection and surreal disconnect co-exist, like watching a Dalí canvas in motion.

Ronsdorf sings “am I nothing?” as Lobach in his liquid fullness of movement tells us oh, I’m something. He eats up every count and beat, whether in the music or the text’s rhythm. Turns, extensions, rolling backbends, on the floor, in the air, one shape dissolves into the other, and it’s over too soon. More, please, I silently wish. The record player needle crackles as an old song plays, and Dalcourt dreamily brings the words Lyell recites at the piano to life, “My mother was in love with dance.” Rioche credits much of his success to his mother, who looked at him with “special eyes,” fostering the belief that he was special. A buzzing cell phone provides an everyday beat, and the performers move like robots through each pulse as we wait for someone to pick up the call. That call, the one where Dalcourt learns she’s hired. “I got it. Me. You want me.”

Etta James’ “At Last” pours in and we settle into a beautiful chapter. Lobach comes into focus wearing a baby blue shimmery short dress and long gold gloves, catches a swinging suspended microphone, cups it in his hands and animatedly lip syncs, proclaiming that made-it feeling. Lyell’s movement off to his side isn’t necessary, though, as the song’s power calls for a bold solo that Lobach could easily deliver. We want to focus on him.

Because his next scene is also a proclamation – at last, one’s self. As the microphone rises, he runs his hands along his gloves and pulls the skirt of his dress away from his body. “I love to dress up,” Lobach begins, telling us of his “urge to put on a dress and look pretty.” Or is this Rioche’s story? Everyone is this story. The desire to fully be one’s self.

They all join at the piano with Ronsdorf perched like a bird on his bench. A few notes are played and an ethereal dream begins, the dancers lifting him overhead and carrying him away from his music. They’re all in sparkly, colorful costume while he’s in white. His arms are outstretched, reaching, with his eyes half closed. Has he lost sight? Gone mad? His voice moans as he careens from one dancer to another. Is he just finding his way?

The page turns quickly and Ronsdorf is handed a camera, turning into videographer, giving us a jarring, shaky up-close view of Ryell – the first taste of her commanding our attention. She is the star here. Dalcourt holds the boom light and Lobach peppers her with silly questions as she rushes around stage with importance before a photo shoot – “Do you have a style icon? Describe yourself in a hashtag. What’s your spirit animal?” She feels important, she’s “on,” whirling around in her fabulousness. As she poses madly against the back wall, the camera clicks grow faster and louder under strobe light, with the last one killing her vanity. Dalcourt scoots a potted plant around the disheveled, gasping celebrity.

Some of the most arresting scenes happen towards the end as Rioche digs to darker shades of fame, a place of wishing and wanting and getting, where euphoria and melancholy meet. The quartet sit in chairs at the back wall, puts on sunglasses, and respond to the birds singing with their own head twitching. But Ryell knows it’s all absurd and bursts with laughter, sparking a trippy slip into indulgence. In slow motion for minutes, they’re dying laughing, rolling on the ground, in a state of abandoned bliss. Strobe lights flash almost in time to the driving beats of ethereal carnival-like music with sirens and angelic voices. It’s euphoria until it isn’t. Dalcourt ends in the flashing light by herself, removing her glasses, confused.

She carries that same feeling into a scene we try to ground ourselves in, the familiar song “Non, je ne regrette rien,” but Rioche has different ideas. With a hopeful smile, her arms raise slowly in no-regret triumph only to flinch at imaginary body blows. Lobach and Ryell lift and slide her around like a puppet, then try to join in the same victorious feeling, but they’re all dodging slaps. The climactic ending has Dalcourt’s hands around her own throat, collapsing to the floor in a contorted shape. She lays for minutes, her eyes open – where am I? who am I? what happened? – just a twitch of her finger, mouthing words to a sustained ambient note. Those red patent heels of hers drive home another fatal red shoes story. She crawls through the dark stage, reaching for little moving spotlights she can’t fit in anyway.

And fittingly, the work culminates with a back wall full of stars from a big disco ball. All four are under the glitter spell, hugging the ball like a drug to a Jimi Hendrix-like serenade and swinging it to each other. Lobach as Atlas struggles to hold the ball’s weight on his shoulders. It sways through the group like a wrecking ball and encircles them. The epitome of fame, they keep it moving, pushing it forward, it must keep going.

The dancers and Ronsdorf are so fully committed to Rioche’s vision. They are all great actors. Yet I wanted even more dance from these incredible movers. Their ending trio was so full of beautiful release, devouring the full stage, catching each other’s eye and smiling at the joy of dancing on stage together, such a rarity right now. The real in surreal, it brought tears to my eyes for them. For any choreographer who can premiere a full-length evening performance during a pandemic, that maker of dreams deserves all the glitter in the world. 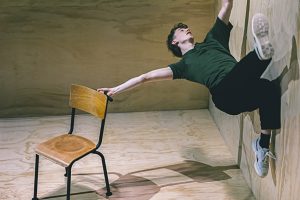 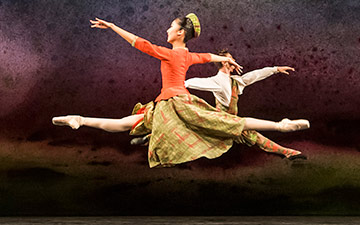 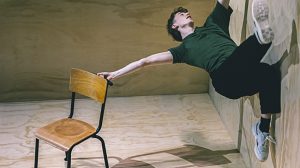 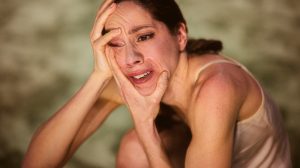 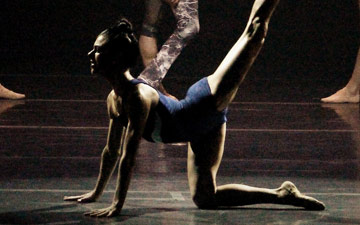