English National Ballet (ENB) is in a celebratory mood in the Solstice programme at the Royal Festival Hall.  The company all wanted us to have a good time and the audience seemed determined to do so.

The programme is a cannily chosen mix. There are classical pieces from Sleeping Beauty, Le Corsaire, Coppélia and Swan Lake, and also some of ENB’s more recently commissioned new works from Khan, Forsythe and Ochoa which have become audience favourites.  There’s also a nod to emerging talent with a short piece from company choreographer Stina Quagebeur.  It’s all done at a fairly brisk pace, with no interval, nine pieces in about a hundred minutes.   It’s presented on a bare stage, with no scenery, but we do have the ENB Philharmonic present, spread out in extended formation from the pit into the first couple of rows of the stalls. The orchestra is under the tender and watchful eye of conductor and music director Gavin Sutherland and most of the music is live. Despite the current constraints, the company has pulled off an uplifting performance with energy and charm.

The opening piece is the wedding scene from Ronald Hynd’s Coppélia. It fills the stage with a corps of sixteen, eight soloists and a leading couple in colourful and lavish costumes. Traditionalists will be happy.  Jeffrey Cirio pilots Fernanda Oliveira through some tricky balances and thoroughly enjoys his solos, as do the audience.  The music is delightfully danceable. Fun and fizzy, Coppélia puts us into a good mood.

The duet from Akram Khan’s Dust (made for ENB in 2014) which follows is a much darker piece, more of a challenge to absorb shorn of its context. James Streeter nevertheless makes a considerable impact as the traumatised soldier unable to reconnect with his wife Erina Takahashi. The duet really takes off when she locks her legs around his waist and leans back. They become one conjoined creature, and she winds and slides up, around and over him. It’s a great piece of fluid partnering, brilliantly performed by a closely attuned couple.

The first movement from Ben Stevenson’s Three Preludes is more inscrutable. White clad Junor Souza and Emma Hawes are separated by a ballet barre. Though he reaches across to support and partner her, for most of the time the barrier remains between them, a physical manifestation of an emotional constraint. Feelings are muted. It’s elegantly done, cool and enigmatic.

The pas de trois from Le Corsaire takes the temperature back up again. This celebrated showpiece is often given as a gala extract, and there’s no need to know the story to enjoy the bravura display. Shiori Kase manages to maintain a ballerina decorum even while baring her midriff in Medora’s glittering costume. Francesco Gabriele Frola as Ali provides spectacular leaps, and manages to rise briefly onto one foot while holding Kase high above his head. Joseph Caley as Conrad grins with delight at just being there. The audience adored it: if there had been an interval, then the break would surely have been here leaving us all suitably wowed and heading for the bar to celebrate.

Next up is another classical piece. The excerpt from MacMillan’s version of The Sleeping Beauty isn’t a famous pas de deux, but instead the jewel fairy variations.  It’s an attractive display of classical steps in glorious tutus that gives some of the soloists a chance to shine.

Annabelle Lopez Ochoa’s Broken Wings was created in 2016 for ENB, a take on the passionate and difficult relationship of Frida Khalo and Diego Rivera. The duet is a tender moment of happiness in a much darker story. Fabian Reimair, in a fat suit, twinkles and flirts as the rumpled Diego, charming the fiery Katja Khaniukova as Frida, tossing her around with casual ease.  Both dancers inhabit their characters with real conviction. Extracts like this can’t give the darker nuances of the complete work, but in the circumstances, the Mexican sunshine was very welcome.

Hollow is a complete short work from Stina Quagebeur, company member and emerging choreographer. Emily Suzuki and Victor Prigent are an unhappy pair. Try as he might, and he clearly cares, he just can’t get through to her. She is lost and numb, always turning away.  Do they get it together at the end? It’s ambiguous but I’d like to think so.

So we have a happy couple, an unhappy couple, and then the Black Swan pas de deux, without which no gala seems to be complete. It protagonists might look happy now but we know he soon won’t be. This is from Derek Deane’s version for ENB.  It gives us a first look at the recent joiner and new principal Natascha Mair, partnered here by Isaac Hernández. She is glamorous with luxuriously long limbs. She dominated more by force of personality than technique.  She is a truly carnivorous Odile, almost licking her lips over her prey. Hernández looked understandably a little overawed, but boundingly happy in his solos.

The evening concludes with the complete Playlist (Track 1, 2) by William Forsythe, made for the company in 2018. It’s a natural for a high energy rousing finish. Forsythe choses modern neo-soul music, but upends expectations by using it for rigorously classical ballet steps and combinations. His all male cast of twelve attack these with an energy and verve that leaves you breathless. It’s neatly constructed, movements passing from group to group, then solos and duos that barely let up for more than ten minutes. The cast are a mix of ranks from principals down to corps members. Everyone gets their moment, and all they really go for it. They are quite a team; underlining this, their T shirts feature their names on the back, like football shirts.  It would be unfair to pick anyone out. For the record, the cast on the night was Jeffrey Cirio, Joseph Caley, Fernando Carratalá Coloma, Miguel Angel Maidana, Noam Durand, Daniel McCormick, Rhys Antoni Yeomans, Giorgio Garrett, Henry Dowden, Erik Woolhouse, Aitor Arrieta, and Ken Saruhashi. It was terrific fun for them and for us.

Audience reaction was very warm and positive and not just to the obvious barnstormers like Corsaire but also to more reflective pieces such a Dust and Hollow. The company are in great form. Gavin Sutherland is a very visible presence, and his attentiveness and responsiveness to the dancers was hugely impressive. ENB is back at Sadler’s Wells in September with the premiere of Akram Khan’s much delayed Creature, and it will be fascinating to see this at last. 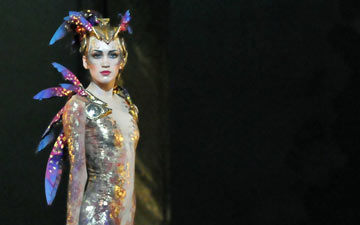 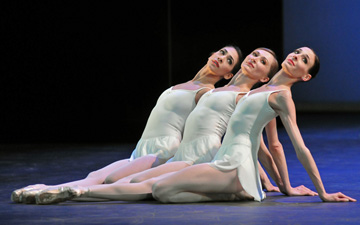 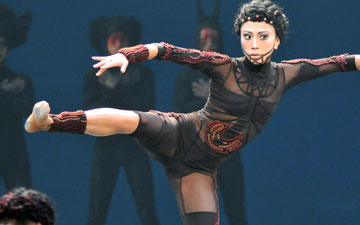