Rambert Dance Company brings a mixed bill to Sadler’s Wells which offers a mix of new commissions with rarely-seen work from their archives.  Some items had much more impact than others, though not necessarily the ones you might imagine from the programme.

The evening opened with a UK premiere of SUB from Itzik Galili, who had previously provided Rambert with the cheerful and energetic A Linha Curva. This was followed by a revival of Siobhan Davies’s The Art of Touch. The closing section was a revival of L’après-midi d’un faune – another memento of the Ballet Russes era which so many companies have been referncing in the last couple of seasons – followed by a new work, What Wild Ecstasy,  designed to compliment it from Mark Baldwin, Rambert’s Artistic Director.  The running order looked odd: you would expect that Galili would be more likely to deliver a rousing closer to a mixed bill than Baldwin.   But in the event though both the new pieces had something to offer it was still The Art of Touch, made back in 1995, which looked the most accomplished and thoughtful of the items on offer.

SUB is for seven bare-chested men, and is set to Weather One, by Michael Gordon, attractive and very danceable music.  Unfortunately it could not be played live – a pity, given the high quality of Rambert’s orchestra, who could have given it even more impact.  The beautiful lighting design by Yabula Abulafia is an integral part of the piece – narrow bands of light designed just to pick out the dancers’ hands or form corridors down which they run. In the opening moments of the work there is a duet for two men in a small pool of light: it was very strongly reminiscent of the work of Russell Maliphant and his lighting designer, Michael Hulls, especially in the transfers of weight between the two.   But after this opening we saw much more unison work punctuated by solos. Many of these seemed tantalisingly brief: Miguel Altunaga exploded into a flurry of movement but just as suddenly stopped. It was frustrating that these short bursts did not develop into a more sustained idea, or greater variety in groupings of the cast.  This was a moody and downbeat experience, albeit a very energetic one.

It is much more surprising to find a revival of Nijinsky’s L’Après-midi d’un faune on a Rambert bill than a world premiere.  Rambert seldom revisit much of their vast archive. (It’s been a number of years for example since we saw their version of Tudor’s Dark Elegies, which used to get occasionally revisted.) This production hasn’t been revived for 30 years or so:  this was billed as Ramberts’s 342nd performance.  Marie Rambert saw Nijinsky perform the work when she was a Ballet Russes dancer and set it on her company in the 1930s. The revival is mounted by Ann Whitley.

Rambert make a much better case for the work in this production than English National Ballet did in their performances this spring. It looked alive and the dancers looked fully engaged in it and committed to its particular mood, right down to every one of the nymphs. Dane Hurst was the Faune: every moment was very precisely presented and made to register, even the curling of his toes as his weight moved through his foot. Pieter Symonds was a stylish art deco nymph.

Mark Baldwin described What Wild Ecstasy as a companion piece to Faune, but the links do not appear obvious to the viewer. This is a new work set to set to a new score from Gavin Higgins commissioned by New Music 20×12 as part of the Cultural Olympiad. It puts nearly all the company (20 dancers) on stage.  They are dressed by Michael Howells in a variety of red costumes as if for a party – though no one seems to be having much fun.  There are some mad hats you would only wear for a dare. Three huge wasps hang over the stage – to indicate the pleasures of the British summer perhaps ?  The costumes are sometimes distinctly unflattering. Particular commiserations go to the woman in the big fluffy / furry pink bolero which obscured so much of her body.

The music was noisy and effortful, but does not succeed in lodging in the brain. The movement likewise: no fault of Rambert’s excellent dancers who zip across the stage, but despite the energy and the commitment of all it did not cohere into a satisfying experience. The ending, a huge shower of golden balls dropped from above, is more memorable than the rest of it. However, I should say that it was enthusiastically received by the audience.

Musical responsiveness and a fine sense of structure were provided by The Art of Touch in the central part of the programme: this delivered the most satisfying and lucid dance experience of the evening. Siobhan Davies responds to the sense of momentum in Scarlatti’s harpsichord works, the notes tumbling over one another, and sends her dancers racing across the stage to embody them.  (These were played by Carole Cersasi.)  It’s not all energy though:  there is much more light and shade in her construction, much more nuance.  A cast of seven is combined ingeniously in many different ways. There is a particularly fine duet which seems to illustrate both the title of the work and Davies’s instinct for the significant gesture.  The man places his hand quite simply on the woman’s belly. It’s a strikingly intimate and personal moment, which feels exactly suitable and right and adds such human warmth and tenderness to the work. 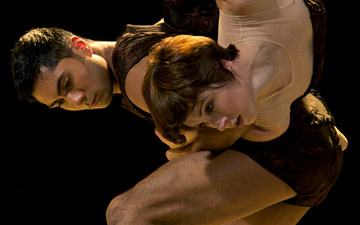 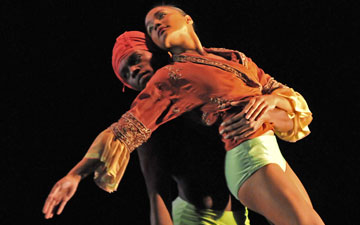 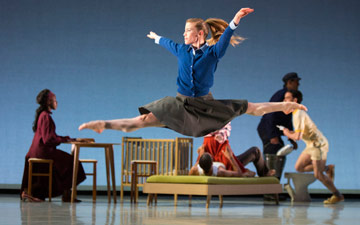 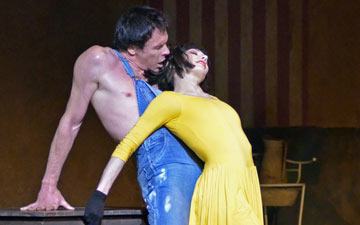