What happens when the show stops?    Where do those characters go after the curtain call?  It’s a question we no longer need to ask in a cinematic context because it seems that almost every film now merits a sequel.  But, it’s not yet a device much used in the context of dance theatre.   Until now.

Lost Dog’s prize-winning ‘It Needs Horses’ ends with Anna Finkel’s downtrodden, down-at-heel showgirl escaping the torment of her circus-ring torture at the hands of Christopher Evans’ demented clown by leaping the barrier to freedom.  And ‘Home for Broken Turns’ begins with lonely Anna propping up a wall outside the theatre – in the dark – apparently just moments later.   Although it is hardly a seamless continuation, we are left in no doubt that Anna is the ‘broken turn’ making her way home.

The home in question resembles a scene from a Mexican ‘B’ movie where a crazy mother and her three stir-crazy daughters inhabit the kind of mondo macabro landscape where balls of prairie grass blow down a deserted main street.   The demented matriarch (Laura Peña Míñez) regularly calls her poverty-stricken brood to order so that they can fall to their knees and worship a cockerel atop a pole or hold out a “missing person’s” poster each time the bus passes by.    The girls call out, seductively asking for a coke (though, in Spanish, it sounds, appropriately in the circumstances, more like “cock”) a bubble gum or a bus ticket out of there.   Frustrations boil over and the sexy, sultry Lise Manavit explodes into a madness that is quelled by the comforting of her “sisters” and the temper of the fearsome matriarch.   It’s a battered rural homestead where (plastic) hens wander freely and young girls dream of a future that is anywhere else.   But, somehow you know it’s the place they will return to – as Anna does – once the greasepaint has been smeared away and their dreams have been shattered.

This is a work that is dark and deep, like a bottomless black pool requiring forensic exploration.    The use of different languages suggest that these characters have arrived from diverse locations and three of the women – the mother and two “daughters” – wear what looks like green cord tightly wrapped around one ankle.   It is not clear why the third “daughter” remains untagged.    The strange sisterhood of broken turns is completed by Solène Weinachter – who has been building a very strong reputation at Scottish Dance Theatre – and Ino Riga as the most pious of the three younger women.

The concept of ‘Home for Broken Turns’ appears to have been based on Luigi Pirandello’s play ‘Six Characters in Search of an Author’, where six random people turn up unexpectedly at the rehearsal of a play, explaining that they are characters in search of an author to complete their story.    Although it is Finkel’s story that Lost Dog are expanding, one imagines that they could take any of the other characters and give them a prequel.   It’s a process that could go on for years.

When Anna eventually arrives home, the laddered, flesh-coloured Lycra costume and plumed headdress of ‘It Needs Horses’ are replaced with an ordinary cotton dress and the make up is all wiped away, effecting a remarkable transformation.   She’s back home with her crazy sisters, praying to a cock, asking for a “cock” and begging for the bus ticket back…….to where, exactly?

Whereas the sequel can take a lot more turns, the original ‘It Needs Horses’ has settled into a classic routine of fast-paced, poignant and very physical interaction between Finkel and Evans.   These clapped-out performers have forgotten why they are in the circus ring as they desperately try to recall the skills that used to fill Evans’ bowler hat with coins.    She is no longer a trapeze artist; he can no longer juggle.   Their frustrations boil over into a violent danced discussion, not unlike the Apache style of Parisian café dance where performers slap and kick each other, mimicking the violence of a pimp and a prostitute: an allusion that seems to fit, especially when Evans uses the unconscious Finkel’s hands to crudely dab at her own crotch.

The timing of these brilliant dancers’ interactive movement is slick, and in portraying these sad characters who have lost any memory of their talents, Finkel and Evans exhibit a limitless depth of performing flair.    This work is anything but a broken turn. 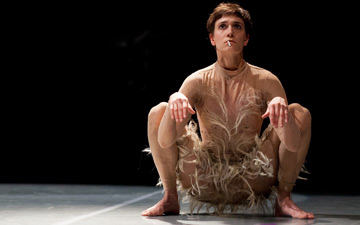