Ben Duke opens his one-man show disarmingly by losing his place in his copy of Milton’s Paradise Lost. It’s only his second attempt, he tells us, at recounting the fall of mankind in the fire-damaged Battersea Arts Centre. This new piece is a co-commission between The Place (where he is a Work Place artist) and BAC, the aim being to present productions that refuse to be categorised as theatre or dance.

Duke trained as an actor before turning to contemporary dance. Driven by his perceived limitations as a dancer, he launched an alternative career as choreographer and performer. He formed Lost Dog with Raquel Meseguer in 2004; their duet It Needs Horses won The Place Prize in 2011. Now he’s taken on the role of God (and several lesser beings) on his way to the Edinburgh Fringe Festival in August.

As Milton’s God and himself, he ponders aloud on how to begin creating. He is alone on a rudimentary stage, a white sheet at his feet and smoke-blackened flies above. He climbs a rope to assert his omnipotence, accompanied by the resounding opening chords of Also Sprach Zarathustra. But there’s a chasm between his aspirations and reality. After descending, he does a jerky little dance, stumbling off-balance as he tries to exercise control. As God, he is distracted by angels singing and laughing; as a human father, he is irritated by his children’s nagging and giggling. When God summons boulders to destroy Lucifer, chickpeas tumble from the flies.

The fall of Lucifer, which foreshadows the fall of mankind, is depicted by Duke half-lying on his chair, limbs suspended, to Debussy’s Clair de lune, before all Hell breaks loose. God decides to start again, like a choreographer scrapping his previous efforts, declaring that he will make it all better. The longest sequence of wordless movement has Duke huffing and puffing, lunging, scrabbling and twitching as if evoking the struggles of Frankenstein and his monster.

A smoke canister half-conceals Duke’s strip routine to emerge as Adam, with a fig-leaf over his flesh-coloured lycra unitard. Self-conscious in his apparent nudity, Duke explains that his dance is going to reveal who, why and what it is to be human, answering questions in the way only dance can… but he fails to do so. The BAC audience’s laughter recognises how pretentious earnest dance-makers’ claims can be.

Duke holds conversations between himself as God, Adam and Eve, writhing in sinuous curves as the tempting Serpent. He returns to his chair, fully clothed apart from bare feet, to lament God’s children’s fall from grace. Water descends from the flies, drenching him as he foretells the future, hurtling through the Old and New Testaments. We know in advance of the crucifixion because Adam was ‘born’ with his arms outstretched. And we have heard the ending of Milton’s epic poem read aloud at the very start of the piece.

The layers of narrative become so entangled towards the conclusion that a late story about the birth of a baby the father feared was still-born is hard to place. So are Duke’s references to painful real-life tragedies involving the death or abduction of children. Are they examples of the suffering unleashed forever after by the expulsion from Paradise? The piece ends (ironically?) with a jublilant voice singing The Battle Hymn of the Republic, assuring us that God’s truth is marching on as Duke looks at us impassively from his chair.

It’s an intriguingly ambitious show, presented in an intimate low-tech style. For all his faux naif modesty and charm, Duke is an accomplished speaker and dancer, holding an audience gripped. A clever choice of music, from classical to pop by way of minimalism, comments on the narrative, whose connection to Paradise Lost is often comic or tangential (as the title admits). The pace of the production could do with tweaking, slow in the middle and congested towards the end. The blackened surroundings of the damaged BAC theatre served the show so well that it deserves to find similarly atmospheric venues on tour, where it can’t be categorised as either theatre or dance.

The programme sheet suggests politely that contributions towards taking it to the Edinburgh Festival Fringe would be welcome. ‘There is no watertight argument as to why you should contribute – it is not like your money will buy you any kind of absolution. But it will buy you our thanks and maybe a handwritten letter’. You can donate online by visiting: lostdogdance.co.uk/supportus 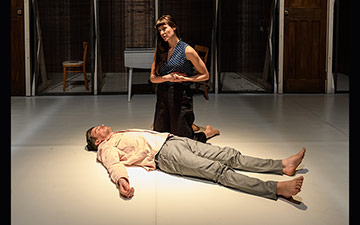