Ben Duke’s speciality, in the works he devises for Lost Dog, the company he founded in 2004 with Raquel Meseguer, is conflating high art with low life – epic literature with everyday banalities. In his last piece, Paradise Lost (lies unopened beside me), he contrasted Milton’s cosmic poem with his own agonies and inadequacies as a parent. In Juliet and Romeo, he envisages what married life might be like for the star-crossed teenagers if they hadn’t succeeded in killing themselves.

At the start, they are in couples therapy with the audience as receptive listeners. Duke is disenchanted middle-aged Romeo, Solène Weinachter dissatisfied Juliet. They sit side-by-side in armchairs in their sparsely-furnished apartment. A battered toy indicates that a child has lived there too. They have evidently been encouraged to re-enact their relationship from the love-at-first-sight moment.

Inevitably, they remember everything slightly differently. They met at a costume ball: he was wearing a Darth Vader mask and she went as a chicken – a phoenix, she insists. He does a manic lustful dance to impress her, to the Beatles I Want You. They link together, grappling arms and paddling palms – very Shakespeare, very Kenneth MacMillan, to Prokofiev’s Romeo and Juliet ballet music.

Instant mutual attraction evidently hasn’t lasted. He now has problems ‘in the bedroom’, which he doesn’t want to discuss. They have already told their teenage story to a playwright, and she wants to act out the potion scene from the play, reliving her apparent death scene. But Romeo ‘can’t access his emotions’ to satisfy her as he stands over her body. He admits to us that he was reluctant to take the poison he’d brought with him because he realised he could live without her, after all.

Instead of dying together, they elope to Paris. In the first flush of sexual consummation, they knock over furniture in a pas de deux, with her draped upside down in eager, fumbling lifts. They are physically in tune, but have nothing else in common – not even a shared taste in music. She wants to believe in Shakespeare’s poetic account of their romance: he is sceptical, resentful of the myth she clings onto.

Their rocky foundations are further shaken by a miscarriage, then the birth of a daughter, Sophie. Shakespeare can’t help them now. Juliet is worn to a frazzle, unconcerned about him: Romeo listens to her and the baby crying and wants to kill her or himself (to Frank Sinatra singing ‘That’s Life’). In exchange for their lives after their early deaths in the play, they are laden with adult responsibilities.

They circle each other at arms’ length as Duke’s choreography tries to reveal their conflicting emotions: they fall and rise in each other’s arms, sharing lifts and supporting each other before splitting apart to exchange verbal insults. Weinachter is an expressive dancer: Duke isn’t. His self-deprecating role is to be inept, blundering, blokeish. He presents himself as everyman, who gets lumbered with dancing because his finer-tuned partner requires him to engage with her.

He’s endearing and exasperating in equal measure: if only his choreography could match his skill with words, the piece would take off instead of stumbling to a close. He and Weinachter, sardonic and vulnerable in turn, speak their lines, poetic, banal or psychobabble, with conviction, their timing well judged. Because so much has depended on their body language, it seems a cop-out to end with Juliet lip-syncing to a swooning love ballad like a soul singer. 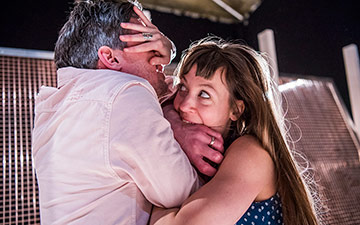