Richard Alston’s new work for his company’s spring tour is an expansion of Isthmus, a brief piece he made last year to music by the Japanese composer, Jo Kondo. Buzzing Round the Hunisuccle is Alston’s response to three Kondo compositions: ‘An Elder’s Hocket’ and ‘Isthmus’, with ‘Hunisuccle’ as the adagio section in the middle.

The two outer pieces feature swift, percussive, syncopated rhythms, while Alston compares the spareness of ‘Hunisuccle’ to the calm of a minimal Japanese garden. After an assertive start following Kondo’s complex interlocking patterns of sound, the restless dancers sink to the floor, dappled with light. They combine as contemplative couples, holding poses like Cunningham dancers (though without their absolute control). Zeynep Kepekli’s lighting draws attention to itself, changing from dark to bright, rendering the performers anonymous.

There’s a solemn, silent duet for Pierre Tappon and Nancy Nerantzi, which seems superfluous once Kondo’s chiming, gamelan-like rhythms for ‘Isthmus’ start up. A quartet of dancers splinter and re-combine, sometimes mirroring each other’s moves, sometimes in counterpoint. They pause in a cluster to watch a soloist deliver her variation on their theme; then they start up again, incorporating her for a while as a fifth element. ‘Isthmus’ is played twice, but it’s hard to tell whether speedy combinations of steps are repeated or reversed. A downward thrust of the arms, used earlier as punctuation, ends the piece on a full stop.

Tabards over leggings (green stripes for the men, shades of yellow to red for the women) are unbecoming. Like the lighting effects, the costumes try too hard to lend colour to a cerebral piece. Alston’s response to music is scrupulous, but Kondo’s percussive clatters, not dissimilar to John Cage’s prepared-piano poundings, takes some getting used to – for audiences, as for dancers.

Much easier to enjoy is a revival of Alston’s Scott Joplin piece from 2006, The Devil in the Detail, that opens the programme. It’s Alston’s  Les Rendezvous – like Ashton’s early ballet, a series of encounters for carefree young people in a park. They’re swept along by the music, played on stage by Jason Ridgway. Fleet footwork is closer to ballet than Fosse-type jazz, though there are plenty of hips and shoulder rolls. A would-be romance between Hannah Kidd and James Pett fizzles out when she rejects him in favour of fun with her girlfriends. Tappon and Nathan Goodman spar together as Lords of Misrule, while everybody joins in the Ragtime dances to Joplin’s catchiest tunes.

Goodman is the fiendish figure in Martin Lawrence’s Madcap, created last year. Julia Wolfe, who composed the wild rackety music, comments in a programme note  that it’s ‘definitely over the top’. So is Madcap’s response, matching the thumping and crashing rather too literally. Its intensity worked better in the black box space of The Place than in the cavernous New Wimbledon Theatre, where it seemed over-wrought, striving for effect. 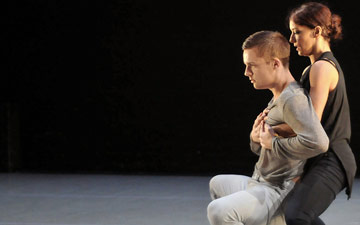 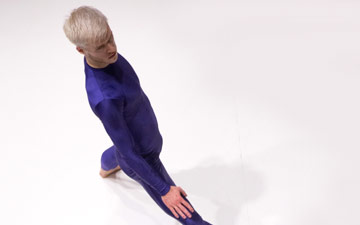