I like Rosie Kay’s work. She tackles *big* real issues and not many do that. So 5 Soldiers was about the army at war, There is Hope is about religion and spirituality and the next one will be about overeating and obesity – well probably. These subjects aren’t tackled in any superficial or impenetrable way but only after much research and a lot of contemplation and workshopping. I don’t know how the relatively new There is hope has fared with deeply religious dance lovers and those in the trade like vicars and rabbis, but I saw 5 Soldiers a couple of times and there always seemed to be some soldiers in the audience bouncing up afterwards and saying how realistic a depiction it was of what they were about – warts and all.

I’m not particularly religious but religion and spirituality do permeate our life from an early age and every day on the news we hear of things done in the name of religious values. In There is Hope Rosie Kay draws many strands together from across the world and shows us images from nirvana to carnal debauchery and murder as part of the religious continuum from good to evil.

It starts innocently enough with a white-suited preacher addressing us – he speaks, and gestures extravagantly, but instead of hearing words we hear a squawking trumpet. Brilliantly synchronised, it captures the theatre of street and TV preachers – one minute softly appealing to our better selves, the next railing at us and promising hell and damnation unless we follow the one true way.

An organ brings forth some believers from the audience (company dancers). They dance around the preacher; hysteria develops; they strip to underwear and are given a new life in new white robes. The music is atmospheric and improvised – occasional drums or sparse trumpet against the backdrop of a sustained singe organ note. The priest harangues the disciples and they slowly morph into animals – a ram, eagle, bull etc. Tables turned, the preacher has his head chopped off and the world becomes messy, squalid and full of rubbish (literally). And endless sex in rich variety to incessant heavy metal. Then we have the birth of a devil-being – cleverly done using the multi-purpose cruciform set. It ends in an odd cycle of life, growing, self-possessed life, madness and death – round and round they go like Escher’s little reptiles. I’ve missed much out but in a little over 30 minutes we’ve seamlessly descended into hell with not a dull millisecond – it’s tightly done and you feel almost mugged by the powerful onslaught.

The journey to heaven in part 2 is less clear if much happier – with flowers, birdsong, a meditation session and incense filling the theatre. There is more dance, though this is not a dance show at all. It ends with the removing of clothes, and uncontrollable shaking in a state of bliss. But if there is any message the final few moments see the stage world covered by the backcloth: all is white and celestial with projected stars spinning around. It might be heaven or it might just be saying we are all dust in the bigger scheme of things. Gets you thinking does this work.

I’ve seen There is Hope twice now and want to again – there is so much to unpack. I’m normally wary of non-dance shows, which this is, but the drama is so strong and the dancers’ telling so good that I sat in awe at the parade of the deep belief some of us have. It’s a beautifully-crafted piece with the band an integral part of the telling – as much as the dancers. It deserves a lot more touring and I hope it does not really upset anybody, so much as make us all think about our deep roots. 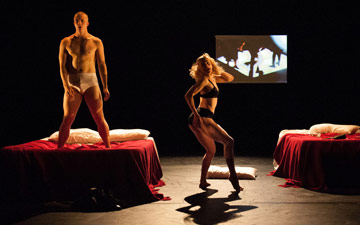