Way back in the very early 1990’s a young William (Will) Tuckett made an exceedingly racy ballet for Birmingham Royal Ballet (BRB). It was called Licence my roving hands, was to Jimi Hendrix songs and the dancers were dressed in very tight-fitting shiny latex – Miyako Yoshida raised the temperature by several degrees, I recall. Kind of high-art-meets-clubbing-meets-soft-porn and I thought it was terrific and very fresh. I saw it at Sadler’s Wells where some in the audience were very affronted and walked out as the performance was still going on. The walkout reached its zenith when an elderly man with a noisy Zimmer frame slowly, very slowly, clanked up the central aisle to the exit. It seemed the ultimate putdown.

Seeing Edward Clug’s Radio and Juliet brought this memory back because I so wanted to walk out and do it very nosily too. Of course I didn’t, but hopefully this goes some way to explain just how indignant I felt, waiting for it to end. What makes it worse is that the work dates from 2005 and so is a known entity, in the rep of a few companies and in receipt of more than a few good and apparently knowing reviews. I despair, but we all see things differently, of course.

So, what’s the problem with Clug’s Radio and Juliet? Firstly, it’s just so divorced from the Romeo and Juliet story as to be unrecognisable. It’s just not at all coherent to most in the audience. I think if the Birmingham audience didn’t know the title and saw it blind most wouldn’t have realised what the inspiration was. But even with the title, we are mightily confused by the action, and the programme offers very little help and no synopsis. Instead, you get the playlist of Radiohead songs used in the piece – I guess if you want to burrow deeper (I like Radiohead, but no thanks – it’s a ballet I want to forget not relive). And there is an interview with Clug where it’s clear he feels the song lyrics amplify beautifully the ‘story’ he is telling. And of the work, we also get “It relies on the audience’s perspective – to follow the performance through their own experience.” which I always feel is such an unhelpful cop-out for most sat out front. The problem with the meaningful lyrics is that they are very hard to make out in a theatre and, it being Radiohead, they are often slurrily atmospheric anyway. The deep meaning for Clug is impossible to share in the live work, unless you know the songs intimately already. Perhaps 0.0001% of an audience? Unclear storytelling supported by unclear words – a normal ballet-going audience is on a hiding to nothing from the start.

Clug’s ballet starts with a lengthy black and white arty film of a young lady in a Palazzo. It’s not obvious but Juliet is deciding not to take her life and the rest of the work is, apparently, her perspective on what has happened. And it seems to feature six Romeos, or perhaps 6 boyfriends in succession. They also provide the grit of a fight amongst themselves, there being no sign of Montagues and Capulets as such. Tyrone Singleton emerges as the ‘true’ Romeo and there is an interesting duet with Yaoqian Shang’s Juliet. The movement is angular, sharp, moody and passionately (old-school 90s) modern. On its own, the duet has been performed at galas and you can kind of see why. The work overall is a real test for all the dancers of razor sharpness and movement BRB rarely get to do. That’s no bad thing given we are in this century and not the last. The dancers are all committed but as a story it doesn’t work at all and for movement in this style Goyo Montero’s Chacona, seen in June’s “Curated by Carlos” bill really wows as pure dance, unburdened by all the bonkers annoyances here. Or better still get the full thrill of such movement by bringing in Forsythe’s In the Middle, Somewhat Elevated. That said things move on, as I’m sure Carlos Acosta, BRB’s Director, is doing as well. He certainly showed that in the second part of the bill, if not with his dancers.

If Radio and Juliet sent the audience home befuddled (not least from Romeo’s death by lemon) the other half of the double bill came from somebody who knows how to tell a story in an interesting and readable way – Rosie Kay. It was generous of Acosta to invite her Birmingham based company to present their new Romeo + Juliet as part of the bill and allow them to use BRB’s orchestra. This made a huge difference in emphasising the dramatic use of Berlioz as part of Annie Mahtani’s soundscape. And with more performances under their belt, the whole piece felt rather elevated compared to the premiere I saw/reviewed last month.

A Romeo and Juliet for our time with gangs, drugs, knives and the inevitable deaths that follow, Kay lays it out readily with her versatile mix of dancers. There is the odd ballet reference, but her dancers represent an interesting combination of South Asian, street, contemporary and hip hop – the crunch of the new and surprising, but all in the service of narrative. The introductions to the gangs at the start feels more pacy and nuanced than before if at 14 minutes the big duet between Romeo and Juliet continues to feel perhaps a few heartbeats too long. But I do love the way the dead are integrated into later action and their loss hovers over all. And the fighting scenes continue to impress mightily as realistically short and almost haphazard in their outcome. The reflective end, with petrol station flowers, is particularly poignant. All up Romeo + Juliet now feels like a strong 4-star peek into the urban realities of today using an age-old dramatic vehicle and I look forward to it doing a national tour at some point. 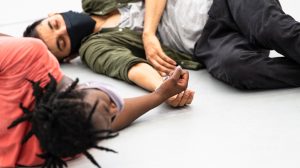