With his Nutcracker! Matthew Bourne really wants the audience to have a good time and he knows how to deliver it. It’s almost 30 years since he first presented his take on the familiar Christmas story, and it’s had a few tweaks since then, with updated eye poppingly bright designs by Anthony Ward, but his take on the storyline is as before. Our plucky heroine Clara is incarcerated with her friends in the Victorian era orphanage of the repellent Dr Dross and his wife, where she is bullied by their spoiled children Sugar and Fritz. But with the help of a transformed nutcracker doll she escapes and reaches Sweetieland in Act 2 where she searches for her true love. Bourne’s theatrical instincts are strong and he knows how to make us root for his heroine, and he keeps us on the edge of our seats to the very last – will she get her man?

The work opens with the orphans nervously lining up on stage, Clara looks out at the auditorium, sees us and waves: she’s immediately marked out as more confident than the rest. Others are more shy, bashful or cocky. Here we get a glimpse of how these characters will transform when they reach Sweetieland – the bickering gobstopper lads are obvious.

Many of the familiar elements of Nucracker are still here but just not quite as you might expect. The most essential ingredient, the Tchaikovsky score is played live, conducted by Brett Morris.

It’s Christmas at the stark, austere orphanage. Dr Dross, his wife and offspring are sharply dressed in chic tailored black and white while the orphans are in sludgy baggy grey. Dross and his wife hand out balloons and party hats, and he brings in the saddest little Christmas tree in the whole world, a spindly droopy thing with just a couple of baubles. It’s all for show as the Dross family pose for some rich visitors: once the guests are gone, the tree goes out of the window and the presents which had been distributed, including the Nutcracker toy, are locked away in a cupboard

Act 1 moves along at a brisk rate, and Bourne rapidly establishes the characters. The villains get to have the most fun. Danny Reubens is an oily, creepy Dr Dross and Daisy May Kemp is his unbending, unamused wife. Their spoilt, entitled children, Sugar and Fritz (Ashley Shaw and Dominic North) get to dominate the group dances, always pushing their way to the front. The cowed inhabitants are instructed to do exercises with skipping ropes and hoops. These formal assemblies and poses look like a very tongue in cheek reference to the groupings of garland dances from classical ballet. It’s fun to see the ropes and hoops employed differently later when the children turn on their oppressors and tie Dr Dross down with them before escaping, led by the spirited and bold Clara (Cordelia Braithwaite) and the Nutcracker doll transformed to human size.

If you are a Nutcracker aficionado, you can have fun spotting where Bourne has deliberately included some traditions, matched to the appropriate moment in the score. Fighting among the children tears off the arm of the Nutcracker doll which Clara adores and rescues. The spindly Christmas tree grows huge after it is cast out of the window, and past it is the route to the Frozen Lake. But you don’t have to be well versed: Bourne’s story is easy to follow for veterans and newcomers alike.

Clara reaches the Frozen Lake where we find an extravagant skating scene, as if from an opulent 1930s Hollywood musical. It’s an outburst of joy and exuberance after the greyness of the first scenes. The dancers are in glamorous white outfits, though Clara remains in her orphanage smock. The dancers skim across the stage as if over the ice. The women hold up the hems of their skirts and wave them, as if they are being blown by the wind. At last Clara gets to dance a duet with her Nutcracker, now transformed into the handsome shape of Harrison Dowzell. But Fritz and Sugar are here as well, and soon Sugar, with a mix of charm and duplicity steals her partner away.

Act 2 brings us to Sweetieland, presided over as if in a bad dream by Dr Dross and his wife as the King and Queen. Clara battles to get through the gates, guarded over by the huge Humbug bouncer. It’s dazzlingly colourful: when Clara finally gets through, the Sweetieland set is revealed, a giant tiered cake with all the different sweets that have already entered posed upon it. The audience broke into excited applause just at the sight of it. It’s a peculiar place though: the characters taste each other for sweetness, and there’s quite a bit of licking of each other.

Bourne seems happier and more inventive in creating dances for the different sweets than he does for big love duets. The five Marshmallow girls are ditsy in pink feathers: The Allsorts Trio are cod-Spanish in terrific glittery costumes. Jonathon Luke Baker slinks around as Knickerbocker Glory with a caddish, untrustworthy allure. The Gopstoppers bounce around and off each other with bravado. They all attack their roles with real relish.

Sugar, now costumed in a fabulous pink satin gown, is firmly in possession of the Nutcracker. Their duet doesn’t strike great sparks but it’s effective enough. We can sense the music reaching its climax, and the guy is still with the wrong girl. Matthew, how are you going to get out of this?

We are in safe hands and all is resolved. Cast out of Sweetieland, Clara awakes back in the orphanage. But with her is her human Nutcracker and as the curtain is falling they make their escape through the window to a storm of cheers. The big payoff is a theatrical rather than a dance moment, but it certainly works.

This is a slick, well drilled show that is consistently enjoyable. It moves along at a brisk pace, all done in around two hours including interval. Only Bourne could set a work in an orphanage and make it funny and entertaining. He certainly makes the most of a cast of twenty, the whole thing feels like a much bigger production. The show continues at Sadler’s Wells until the end of January and is scheduled to tour the UK through to 23rd April 2022. 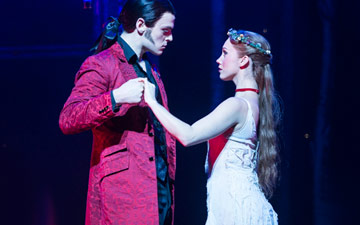