Reel Adventures – A Festival of Classics

It doesn’t get much steamier than Matthew Bourne’s The Car Man, the third of his productions to be presented and screened on Sky Arts during lockdown. His dream team creates another wondrous escape into a different world. Lez Brotherston’s designs are magnificent, Chris Davey’s lighting is atmospheric and Ross MacGibbon’s keen eye directs the filming, Terry Davies’ arrangement of Rodion Shchedrin’s Carmen Suite alongside his own composition, gives enough hints of Bizet’s music to transport us to the heady and sweltering heat of the story’s setting.  Instead of a Spanish factory, the oppressive temperature is that of a small, fictional town in mid-America, Harmony, at Dino’s garage and diner. There’s sweat, sleaze and sex melting off the stage and permeating our screens, plenty to work anyone into a frenzy, but the backbone of the narrative has far more depth and passion than its lusty opening suggests.

Lana (Zizi Strallen) is married to Dino Alfano (Alan Vincent) who is clearly past his sell-by-date. Lana’s sister Rita (Kate Lyons) is in love with the lowly hired hand, Angelo (Dominic North). The dynamics change when drifter Luca (Chris Trenfield) arrives on the scene looking for work.  Duly appointed, his presence has a profound affect on the community as he unscrupulously seduces whomsoever shows an interest.  He acts as a catalyst for change in a rather unsavory way, an alpha male with scant conscience and no regard for consequence.

The scene opens with suggestive, sexual innuendo filtered into every phrase and dance step. It’s clear that Angelo is the focus of a bullying campaign, and that Rita’s devotion to him is not reciprocated. At the start, this manifests itself as acute shyness and lack of confidence (very convincingly portrayed by North), later it transpires otherwise. Interesting to see in this 2015 recording that the ensemble is populated by company members who were on an upward trajectory toward more prominently featured roles, including Cordelia Braithwaite, Katrina Lyndon, Glenn Graham, Andrew Monaghan and Dan Wright. Fascinating to see within the group scenes how powerful each characterisation is, with every dancer creating their own back story and development, bringing an uncanny realism to the stage (and screen). If only some of this individualism could be injected into ‘acting’ in pure classical ballets where too often the drama is diluted by conventional expressions.

Interspersed with vibrant dance sequences for the car mechanics and their partners, Luca shows concern toward the targeted Angelo (or does he have another agenda?) by teaching him to box and stand up for himself. He subsequently moves swiftly into his blatant seduction of Lana while her husband heads off on an errand to the bank.  This turns into a scene of hilarity when Dino returns from his trip to see his wife at the bedroom window, inadvertently waving at her, without clocking the reality of her situation (in flagrante delicto).

As Luca pursues his next conquest, it becomes clear that he is incapable of resisting temptation of any sort if he thinks it will massage his ego. With the central characters in love with him, it is easy to see how he manipulates events, ending in murder and tragedy, but I won’t divulge any spoilers here.

The second act opens at a sleazy bar, Le beat route, complete with cabaret act, a highlight for me. This requires Lyons, Wright and Monaghan to perform as ‘mime artists’, whereupon Bourne’s humour is enhanced by absolutely cracking, show-stopping performances and facial expressions from the trio.

As Brotherston’s set quickly adapts (miraculously) to a prison setting, North’s Angelo transitions from vulnerable innocent to vengeful victim as he retaliates against a harrowing attack by his captor (Wright switches from mime artiste extraordinaire to prison officer and perpetrator in a flash). This is one of the most compelling scenes of the production, however, not unusually for Bourne, as The Car Man surges towards its climax, the viewer is propelled through a range of emotions leaving one breathless and distraught. As is the norm with Bourne, there is no requirement for any direct transcript of this potent tale as one experiences the full impact of great theatre and storytelling without prior instruction. Vincent is suitably repellant as Dino (as he was delectably alluring as Luca in the original cast); Lyons’ sincerity as Rita is palpable and North’s Angelo is so heartbreaking that, not for the first time in any number of different roles he has undertaken, he literally makes my soul ache with compassion. As Lana, Strallen is a scintillating, wanton temptress – no wonder she won a National Dance Award in 2015 for her portrayal. And as Luca, Trenfield exudes a lascivious, rather lewd yet irresistible attractiveness which persuasively raises the temperature in every corner of the stage – or living room if that’s where you’re watching. This production satiates the palate for all the right reasons but as with any success of this kind, it is the bringing together of all the components that makes it such a winning and fulfilling experience. Totally worth watching, multiple times. 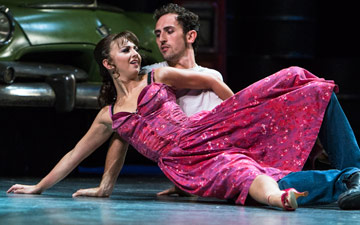 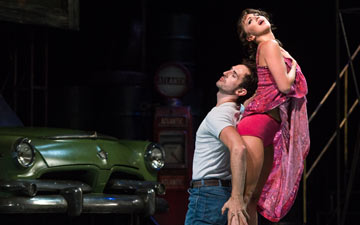