The story of The Red Shoes was originally a grim fairy tale by Hans Christian Andersen, in which a vain girl had her feet, with the blood-red shoes firmly attached, amputated. They carried on dancing without her, until death came as a blessed release. The 1948 Powell and Pressburger film, starring Moira Shearer, turned the scarlet ballet shoes into a metaphor for a fatal talent – a vocation for dancing that demands huge sacrifices: no childhood, no children, no family life, maybe even the end of life itself.

It’s a powerful myth, perpetuated in novels and films such as Black Swan. This is not how dancers conduct their careers nowadays (we trust). They can marry, have children, carry on dancing, move on to other activities (as Moira Shearer did).  The glamour of The Red Shoes film, released not long after the Second World War, harked back to the era of touring Ballets Russes companies, filled with exiles from earlier wars and revolutions. They weren’t able to settle down, had they wanted to.

Matthew Bourne preserves the period feel of the Powell-Pressburger film, with its exotic locations in Monaco and the south of France.  Most members of his Ballet Lermontov company have Russian or East European names, with a smattering of British girls in the corps de ballet – Beryl, Pamela and Nadia, as well as the heroine, Victoria Page. (They’d have had to Russify their stage names.) We have to take it as given that this is a good company, with a high reputation in its time; otherwise, it wouldn’t be worth all that sacrifice.

Here Bourne faces one of many dilemmas. Is he sending up the company’s repertoire and its standards of dancing? His own company, New Adventures, is not an élite ballet troupe but a dance-theatre ensemble. Many of its members are not comfortable for long on pointe. So when they perform Les Sylphides or hommages to an Ashton ballet such as Apparitions or a Massine symphonic ballet, are they meant to be as inept as they are?

The first time we see them in performance near the start of Act I, the audience of British toffs appears bored and blasé. Lez Brotherston’s ingenious stage design has a revolving proscenium arch that switches between front and backstage. So dancers facing us as they waltz balletically in elegant outfits – tails and white tights for the men, ball-dresses for the women – turn to take their bows to a supposedly Covent Garden audience at the rear of the stage. Lady Neston’s guests at the ballet are then entertained by her niece, Victoria (Ashley Shaw), in an audition for Boris Lermontov (Sam Archer), the Diaghilev-like impresario of the visiting company.

Shaw is charming as naïve Victoria, free-spirited in soft shoes, her green skirt swirling around as she spins and leaps, her upper body pliant.  Lermontov, however, seems more impressed by the boyish pianist who accompanies her – Dominic North as Julian Craster. Both British youngsters are taken into the Lermontov Ballet in time for a technical rehearsal of Les Sylphides.

The company’s leading pair, Michela Meazza and Liam Mower, have Russian names but are clearly channelling Alicia Markova and Robert Helpmann. Prima ballerina Irina walks through her role in a fur coat and high heels, holding her white tutu in front of her for the lighting technicians. Ivan, her partner in a silk dressing gown, smokes a cigarette as he marks his steps.  The ballet master and choreographer, Grischa (Glenn Graham), resembles Leonid Massine in white shirt, high-waisted black trousers and cummerbund. The corps wear period practice dress: fish-net tights, leotards with scarves round their waists, neat little cover-ups. Lez Brotherston’s costumes are magnificently right, back-stage and in performance.

Paule Constable’s lighting captures the theatrical effects of the time, with footlights and conspicuous spotlights, as well as conjuring up hallucinatory horrors or a moonlit seaside esplanade. She, Brotherston and the projection designer, Duncan McLean, enable the narrative to move seamlessly between locations, each with a heady, easily recognisable atmosphere. The music, arranged (and supplemented) by Terry Davies from Bernard Herrmann’s film scores, is a terrific support to the story telling.

If you remember the 1948 film, the plot is easy to follow. If you don’t, and can’t pick up the references to ballets, a printed scenario would be helpful, as would job-descriptions of the characters in the cast sheet (if you’re lucky enough to get one). The problem is that the men are hard to identify. .Archer looks too young to be a hardened impresario as Lermontov and can be confused with Grischa in his guises as ballet master, choreographer and villainous performer.  North as Julian, Victoria’s composer lover, keeps changing his appearance from a piano-playing geek in glasses to a conductor in tails, or an unremarkable boy in slacks, possibly a male member of the corps.

Here’s another dilemma for Bourne. Julian is not a dancer, yet he must partner Victoria in love duets. He is supposed to express himself through his music, but he dances solos – one as melodramatic as a Paganini gala number – to reveal his soul as a tormented creator. Though he starts as an awkward outsider in this camp theatrical ensemble, he soon seems indistinguishable from the rest of them.

He becomes the composer of the company’s new ballet for the Monte Carlo Opera House, The Red Shoes. Lermontov has commissioned it to show off the talent of his new star, Victoria, who has supplanted Irina, his injured prima ballerina. Archer as Lermontov has a tricky task: he must establish that he is not grooming Victoria but treating her as his muse; he is not a choreographer but a Svengali impresario. She, of course, is innocently gratified to be his chosen one.

The Red Shoes mini-ballet has a magical white and black set based on the paper cut-outs that Hans Christian Andersen used to make. The music is Herrmann’s soundtrack for the Francois Truffaut film Fahrenheit 451, complete with referee’s whistle, cowbells, glockenspiel and triangle. Is it any good as a ballet? The dancers have fun in contrasting routines, and ballet master Grischa (Graham) is convincing as a Massine-like tempter offering the enticing red pointe shoes. When Victoria puts them on, the set, lighting and characters become sinisterly Expressionist as her feet carry her away to her death.

It doesn’t matter what we spectators make of the ballet-within-the-ballet because it is a triumph, its performers and creators overwhelmed with recorded applause. After a slow start, it makes an upbeat ending to Act I.

Act II takes place three months later in Villefranche-sur-Mer. The end of the ballet company’s season is celebrated with an excellent party in which everybody dances with whomever they please. Victoria and Julian are left alone for a romantic balletic duet to Herrmann’s sweetest melody for strings. Although Lermontov is displeased, he commissions a score from Julian for another Monte Carlo premiere. Or so I assume, since there is no printed scenario to explain who is responsible for Concerto Macabre, a symbolic ‘modern’ work with a set apparently by Jean Cocteau.

The ballet is so bad and the music so dire that Lermontov dismisses the composer. Victoria leaves with him in a huff and a tweed suit. The married pair are reduced to living in cheap digs in London. Julian tries to compose, while Victoria performs in a seedy East End music hall. Brotherston’s proscenium arch set accommodates in turn dingy theatre scenery, an even dingier bed-sit and Lermontov’s gaudy office in Monte Carlo. As Lermontov broods on Victoria’s defection, he resembles Solor smoking opium on his peacock throne in La Bayadère.

The hallucination, though, is Victoria’s, as she dreams of her return to the Ballet Lermontov, resuming her role in The Red Shoes ballet. She is torn between the Massine tempter holding one red pointe shoe and the impresario holding the other. In her confusion, Ivan, the leading dancer, is replaced by Julian in his conductor’s tails. The corps are demons and Victoria’s beautiful costume is in tatters. Rejected and demented, she meets her death beneath a train. The red shoes are removed, their ribbons like trails of blood. Devastated, Lermontov faces us, the final audience, like Albrecht at the end of Giselle.

The ending, although inevitable, is unmoving because it hasn’t been earned. Bourne, who continues to work on his productions long after their official premieres, has yet to account for the agony of Victoria’s predicament. Why would she choose to die for her art? Or is she simply driven bonkers by performing in a music hall, as many dancers had to? Is she disillusioned with Julian, who doesn’t come across as a lover worth abandoning a starry career for? Ashley Shaw is a delightful performer, but she’s no ballerina: Lermontov’s rage and distress at losing her wouldn’t bear comparison with Diaghilev’s at losing Nijinsky to marriage and madness.

Would the production work better with a ballerina in the leading role? Yes, if she needs to be convincing on pointe as the irresistible star of a financially fragile touring ballet company. Bourne’s New Adventures is not that sort of company, so there’s an innate contradiction in his choice of The Red Shoes. But he’s making the most of the considerable talent at his disposal, alternating roles among his dancers so that they all contribute. (I particularly enjoyed Daisy May Kemp  as at least three different characters, and Joe Walkling as the Boris Kochno secretary and company manager.) The production, which looks superb, is bound to develop as its story telling is trimmed and clarified in response to audiences’ reactions. If Bourne can get it right, his Red Shoes could be passed on to become a staple of a dramatic ballet company’s repertoire. 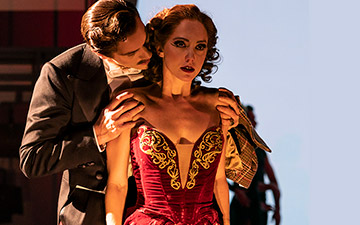 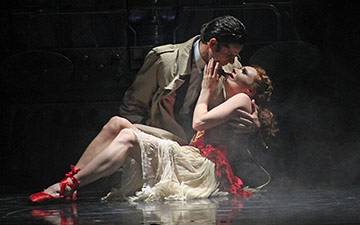 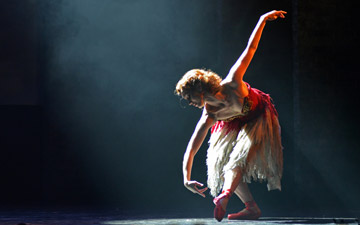