Matthew Bourne celebrates the 30th anniversary of his own company, New Adventures (formerly Adventures in Motion Pictures), at the same time as Tate Britain has launched Queer British Art 1861-1967 to mark the 50th anniversary of the decriminalisation of homosexuality. Early Adventures – revivals of works from 1989-1991 – could be a theatrical coda to the exhibition.

The cut-off date of the exhibition is that of the Sexual Offences Act of 1967, which finally acknowledged that sex between consenting men over the age of 21 was no longer an offence. (The age of consent was lowered to 16 in 2003.) Until the1960s, artists had coded their forbidden desires in covert images or kept their work for private viewing only. British theatre was less discreet: high camp and drag acts were enjoyed, though censorship prevailed until 1968. ‘Being theatrical’ was one of many euphemisms for being gay.

The exhibition is indeed a queer one, in every sense of the word. The sex and gender preferences of the artists appear to be of more interest than the quality of the works on display. The often genteel pretexts for subject matter – bathing boys or girls, bucolic shepherds, sailors, riders – are precisely the stereotypes that Bourne sends up in his Town and Country divertissements. Everyone is being terribly British about what’s really going on.

Bourne created his early works in a period when homosexuality was being legally repressed once again. Section 28, passed in May 1988, decreed that local authorities could not promote homosexuality or the teaching in any maintained school of same-sex relationships as normal family arrangements. The statute remained technically in force for 15 years. Bourne’s mockery of hypocrisy was not as light-hearted as it seems now.

He set Watch with Mother in a school gym, with the cast of nine in short trousers or gymslips. The children’s games, set to music composed or arranged by Percy Grainger, are not quite as innocent as they seem. Inevitably, the sensitive loner is bullied: Paris Fitzpatrick, outstanding in all four pieces, looks remarkably like the tenor Ian Bostridge, when he was very young. The girls gang up: two of the boys pair up, brandishing towels like garlands or the ribbons in La Fille mal gardée. Youthful attachments are formed – passing phases or life-long attachments?

Lez Brotherston’s versatile set, framed by a canopy, transforms into a grand hotel for Town. Guests arrive to Elgar’s Pomp and Circumstance march, to be met by ukelele-playing staff who assist them with bathing and dressing for the evening. The gentry can have no secrets from their servants; nor can the lovers, in the potted version of Brief Encounter, hide anything from the railway café waiters. There are indications here in the doubling-up of characters of Bourne’s 2002 Play Without Words, based on Joseph Losey’s film of The Servant.

Noel Coward sings Dearest Love as Fitzpatrick and friend picnic in a park, their pas de deux interrupted by skeins of scooter-riders criss-crossing like dancers in Etudes. Bourne has always been skilful at diverting attention with simultaneous activities on stage. In Country, little creatures peeking from the sides watch a clog-dancing pair of yokels, with fatal consequences.  Although Brotherston’s backdrop emulates the 1930s colourful posters on the Underground, urging city types to experience the joys of the countryside, this rural interlude is far from Arcadian.

A section in the Queer British Art exhibition reveals how artists such as John Craxton and Keith Vaughan painted utopian visions of Greek shepherds as pretexts for nude studies. Bourne’s sturdy shepherds and milkmaids are fully dressed in smocks and dirndls, more of a Cecil Sharp fantasy than a classical Greek idyll.

Bourne turned instead to Paris in the 1930s and 1940s as the typically English view of exotic eroticism for his 1989 The Infernal Galop (as the can-can was titled). There’s high camp – a merman in a Noel Coward dressing gown with three Jean Paul Gaultier matelots to support him, to Charles Trenet singing La Mer – and low-life: a noisy encounter in a pissoir. Bourne’s choice of cheesy recordings of popular music and the very knowing looks his dancers cast at the audience are reminiscent of Pina Bausch – but in a very British way.

Some three decades later, these Early Adventures are more mildly entertaining than transgressive. It’s easy to forget how earnest contemporary dance could be in the 1980s, and what a relief Bourne’s wit provided. While Lloyd Newson’s DV8 productions challenged British pretences about homosexuality, Bourne slily undermined them. By the mid-1990s, with his corps of male swans in Swan Lake, Bourne had brought his form of dance-theatre into the mainstream. His early works are a reminder of where he was coming from, what his influences were, and how ready he was for the big time. 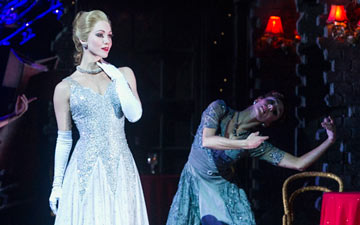 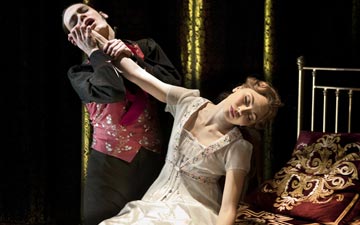