Reel Adventures – A Festival of Classics

Whilst Matthew Bourne has forged a career out of reinventing classical ballets (along with other works of genius), he has actually created a genre of his own, which these days is also perceived as a ‘classic’. His 1995 Swan Lake is one of those and, rewinding 25 years, one can appreciate that the colossal risk he took at the time, was actually going to alter how generations of dancers and theatre goers were going to view the art of dance. His all encompassing ability to engage the senses, to focus the eye on a particular piece of action, to portray humour and pathos in equal measure, to tell a nuanced story in the form of dance, has opened the doors to a vast, sometimes uninitiated audience, with profound effect. He was, and no doubt still is, met with resistance in certain quarters but he has, nevertheless, a following that is ever-growing and many, like myself, relish the thought of a new or revived work being shown.  In these difficult, lockdown times, Sky Arts have offered three of Bourne’s most popular pieces for consumption in the living room.  Starting with Swan Lake, the first thing to note is that this 2019 filming has been directed by Ross MacGibbon. It seems unlikely that anyone will match MacGibbon’s ability to capture the essence of a dance work with such fulfilling results. His own past (as a member of The Royal Ballet) must help, but MacGibbon’s real gift is knowing when to focus on facial expression, to augment the emotional content, and when to reveal the drama of a large cast – in this case, hissing swans or swirling ballroom dancers.

One of Bourne’s many intelligent decisions is to revisit his own choreography, to update, improve and refine all that he has done previously. Swan Lake has indeed changed over the years and has morphed into an even better version of itself. Such is the passage of time and subtlety of the changes, that during the screening, I was sometimes unsure if I was watching something entirely new, or simply seeing it anew. Another of Bourne’s talents is in his choice of cast. In 1995 it was to change the career paths of Adam Cooper, the late Scott Ambler and Fiona Chadwick as the three leading protagonists. They will never be forgotten, nor their exceptional performances diminished in any way, but it was interesting to see the 2019 cast on film, having watched them live at Sadler’s Wells late in 2018. Will Bozier as The Swan/The Stranger, Liam Mower as The Prince and Nicole Kabera as The Queen all gave memorable performances on the stage. However, I dare say that seeing their expressions at such close quarters on screen was an even greater revelation. The dance offers physical interpretations, but as with all Bourne’s choreography, being able to act, is imperative.

The bed in which we first see an adult (in this latest version) prince thrashing around mid-dream, is to become a significant prop – especially in the final moments. As usual, Lez Brotherston’s breathtaking designs lose nothing to the camera, but it merely magnifies the attention to detail and theatricality. Paule Constable’s lighting cleverly brings something sinister to the atmosphere, an ever-present darkness that represents The Prince’s torment, his mother’s critical, icy gaze and his downward spiral into mental anguish. As proceedings unfold, The Prince is dressed, teeth cleaned and he’s togged up in military regalia. The timetable of royal engagements ensues complete with royal waves and paparazzi and a corgi (mechanical) in tow. He’s introduced to The Girlfriend (a hilarious portrayal from Katrina Lyndon) and a visit to the ballet (a fabulous pastiche) follows. I confess to having always looked forward to this, no matter which cast. It’s a situation which must resonate with all regular theatre goers – the member of the public who behaves inappropriately: laughing out loud at the wrong moment; crunching crisps; a ringing mobile phone; dropping the clutch bag over the edge). I have always taken delight in the way the female dancers (reminiscent of the Romantic period) flit around as butterflies accompanied by a male dancer clad in lederhosen, looking faintly ridiculous yet dancing as if their lives depended on it.

A visit to the Swank Bar – a Soho nightclub, does nothing to dispel The Prince’s despair.  He’s forbidden from dancing with his girlfriend and his forceful ejection from the bar gives rise to a beautiful, angst-ridden solo which Mower delivers with all the required suffering and technical clarity.

The City Park is the setting for The Prince’s first meeting with The Swan. Bozier’s chiselled beauty is irresistible from the moment he sets foot on the stage. One can imagine that The Prince postpones any thoughts of suicide he might have had, to further his acquaintance with this avian creature. This scene is among the best in the production. For those of us familiar with the classical choreography, it is startling to watch Bourne’s flock of male swans echo the steps and formations – from the first entrance, to the lines, to the V echelon and even the cygnets. Bozier’s Swan is not easily persuaded to trust The Prince (a brief hiss confirms this), but as the duet moves toward real intimacy, so the bond between the two emerges with touching believability.

Act III, in every version, is generally anticipated with enthusiasm and I remember vividly, the first time I saw Bourne’s. His unexpected interpretation of the story is thrilling. Bozier, as the leather-clad Stranger is intoxicating as he inveigles his way into the hearts (and loins) of a sizeable chunk of the guests at the Royal Ball. The dances (which we know as the character dances) whilst a little too darkly lit, are a riot of vivacious and brilliant dancing. Close up and personal camera angles capture Bozier’s salacious hunger, a dismissive smirk or an alluring glance, alongside his brazen seduction of Kabera’s willing Queen. Mower’s distress at what he thinks is The Swan’s betrayal is heart-breaking, but merely a precursor to a truly powerful final act.

The closing scenes of this Swan Lake are spellbinding.  The Prince finds himself sectioned and being watched over by a clique of nurses wearing masks that resemble his mother (I don’t recall that from previous performances). The pinnacle of the performance though arrives when, back in his bedroom, The Prince is visited by vicious swans, with Bozier emerging from the centre of the bed (great theatre!) and doing his best to protect his prince from the onslaught. It’s as magnificent as it is unsettling, but brings the production to a tremendous and unforgettable end. Performances across the board are stupendous, reminding us that interpretations evolve and change, and do not disappoint.

Bourne’s Romeo and Juliet is no less dramatic. Created last year, I was so taken with it that even after seeing a number of performances in London, I ventured to a local theatre to enjoy it some more. As with other productions, Bourne has updated it and those expecting or hoping for any parallels with Shakespeare or MacMillan, Cranko, Nureyev et al, will either be disappointed or confused. The essence of the play is there, but the details have been transformed into a tale of woe that is in a very different vein.

Set in some kind of mental health facility, The Verona Institute, ‘in the not too distant future’, once again MacGibbon has directed the filming with an expert eye. Brotherston has come up with a set that is chillingly stark, like some sort of young offenders prison, with rattling bars and bare walls and Constable’s bright, clinical lighting, sets the scene to perfection. Juliet (Cordelia Braithwaite) is already a patient/inmate and therefore part of the ensemble dances. Bourne’s actual steps are not necessarily the most inventive but what he does do is create an atmosphere with the simplicity of his choreography and the pace of his group scenes. They echo the music precisely and tell you exactly what and how they are feeling. Initially, we are witness to Tybalt (a staggeringly fierce performance from Dan Wright) seeking out a suitable victim to violate. As he fixates on Juliet – we are led to assume the worst, though we are spared seeing the final brutality of his assault.

By the time medication has been issued to patients/inmates, Senator Montague (Matt Petty) and his wife Brie, (Daisy May Kemp) are about to disengage with their problem son, Romeo (Paris Fitzpatrick). He is unceremoniously dumped, in heart-breaking manner. This is our first glimpse of Fitzpatrick (aptly photogenic) who is endearing, with such a vulnerable, handsome face, that a rush of (in my case) maternal love was inevitable. While he is being kitted out with his white uniform, he sees Juliet for the first time, dancing a solo filled with grief and shock at her recent experience. They meet properly at a dance, arranged by Reverend Bernadette Laurence (the talented Daisy May Kemp again). This is very entertaining, and once the ‘policing’ is dispensed with, the party evolves into a debauched affair.

The first half closes with the ‘balcony’ duet and whilst there can be no direct comparison to anything that has gone before regarding classical and other renditions (except the music, much rearranged), there is a sense of wonderment and passion that is persuasively uplifting and captivating. The never-ending kiss, which consistently resumes from every angle and perch of the set, is permeated with complete innocence and earnestness. At the end, as the camera focuses on each of them, we are left with the searing heat of first love, expressions of bewilderment and adoration, emblazoned on their beautiful, youthful faces.

Much of the second half dissipates into the ether once the couple have been unofficially wed by their fellow inmates, only to be caught out by a drunken Tybalt. I would not want to describe the rest of the performance in any detail, suffice to say that it is every bit as tragic as the familiar version and at my first viewing in the theatre, my companion was still weeping uncontrollably by the time we boarded the Underground. It does not need programme notes, nor a verbal explanation – simply the commitment to sit back and let the shockwaves crash into and over you.  Alongside a terrific ensemble and supporting named roles, further exploration into Mercutio (Ben Brown), his lover Balthasar (Jackson Fisch) and Benvolio (Harrison Dowzell), allowing them a little more prominence in the performance, would give the story more breadth.  However, in terms of drama, punch and weight – Braithwaite, Fitzpatrick and Wright give performances that remain some of the most memorable, in anything I’ve seen, over the last few years. The two lovers are delectable, believable and beguiling. Wright is shocking, compelling and sad all at the same time. Best to watch this with your tissues at the ready as I have not yet survived a viewing, real or on screen, without the tear ducts working overtime. 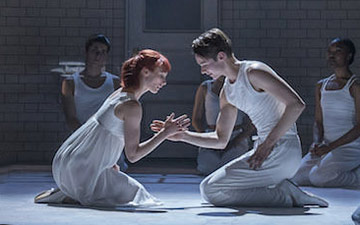 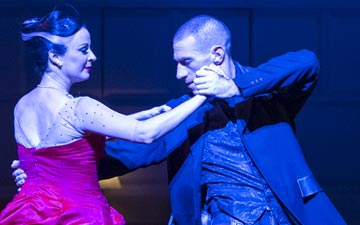