As I make my way in the winter chill through deserted mid-town streets to partake in one of the handful of live performances that has not been cancelled this month, due to the spike in Covid-19 cases, the words “We few, we precious few…” come to mind. I feel like one of the last survivors of an almost extinct tribe – the tribe of live performance-goers.

Japan Society, having postponed its biennial Contemporary Dance Festival (formerly known as the Contemporary Dance Showcase) for over a year, informed ticketholders two weeks before the event that the Butoh artists from Japan were unable to make the trip to perform in person due to Covid-19 travel conditions, thus the Butoh artists would present their work via pre-recorded video. Global touring artists are another almost extinct tribe. Kudos to Japan Society for making last-minute adaptations rather than cancelling their program.

The most surprising delight of the evening, FreeSteps – NiNi, could have easily been missed as it was listed as “a special solo performance in the Society’s lobby from 6:45-7:15; no admission required.” This pre-show performance choreographed by Wei-Chia Su – founder of Taiwan’s celebrated dance company called Horse – was a riveting gem. The piece is part of the 10-year FreeSteps project focused on creating choreographies for non-theater spaces. According to the program notes, the project allows the elements in the surrounding environment as well as the performer’s unique physique and movement capabilities to influence the dance creation. This was manifest in the evening’s solo danced by NiNi, also known as Yu-Ting Fang, a former member of Cloud Gate Dance Theatre, who mesmerized us with a meditation on spiraling perpetual motion.

Several rows of folding chairs were set up for seating in the lobby on opposite sides facing the indoor Japanese garden. Like an organic element of the garden design, NiNi danced on a small island platform opposite and in response to a large-scale bonsai ficus tree. Her non-stop spiraling and swiveling figure reflected the gnarled and twisted form of the tree’s trunk and the snaking trail of smooth black stones carving through the waters of the reflecting pool. Like three-dimensional calligraphy, her hyper-mobile torso drew sideways figure-eights – her hips and ribcage contorting in opposing directions. Meanwhile, her stockinged feet swiveled her around like a corkscrew. Her arms grew more involved – sometimes initiating the spiraling motion and at other times they trailed it. Eventually the movements slowed and took on a suspended quality as the dancer’s face showed her to be in an otherworldly state – all held in the score’s wash of electronic sound. The occasional flicks of her hands caught glints from the lighting above and intensified a connection to the dancer’s deep sensory experience. In the final magical image, accompanied by the sounds of pounding water, light illuminated NiNi’s hands as they skimmed down over her upstretched face. And the spell was complete.

The presentation of A HUM SAN SUI by the Butoh artists Kentaro Kujirai and Barrabas Okuyama from Japan, delivered through a quality videorecording, offered a vision of the uneasy struggle between yin and yang. For starters, these highly pedigreed Butoh performers embody this duality by virtue of their physical build and appearance, which they accentuate through the costumes designed by Mika Tominaga. Kentaro is sinewy, thin, and angular with long straight dark hair, which he wears pulled up in a topknot while Barabbas is broad, muscular, and completely bald and hairless – dramatically heightened by the traditional Butoh white body make-up. Their physical features are amplified by the costumes: Kentaro in an all-black pantsuit revealing the inverted triangle of his bare white neck and a bit of exposed chest; Barabbas – completely bare chested wearing a black, irregular, tulle skirt. The evocative camera work by Naoki Nomoto amplifies this “dance of darkness.” In fact, the initial shot sets the duo in a sea of darkness. The two, standing back-to-back, revolve around as a single being reaching and writhing outward from their physical and metaphorical connection.

The lighting brightens to reveal them as they separate and move as two distinct dancers on a stage. As they explore the surrounding space, the eerie sound design by FUJIIIIIIIIIIIA grows more abrasive. The dancers careen about the stage bumping into each other, their faces distorted in crazed discomfort as their mouths open in gaping silent screams. They push this vision of primal pain to the limit until the energy shifts. In a dramatic transformation, amplified by ethereal lighting and a costume change (they are both shirtless and in long skirts), the two dance side-by-side. Their energetic quality is now in harmony as they move with calm expansiveness in a pleasurable exploration of the space. In true Butoh spirit, A HUM SAN SUI is an encompassing experiential journey navigated by two masterful artists.

Min-sun Choi and Jin-an Kang of Choi x Kang Project from Seoul, South Korea, lightened the atmosphere with their work Complement. The choreography, created and performed by the two principals, situates the dancers as two adjoining, automated cogs engaged in a repetitive function. Their robotic movements are synchronized to the mechanical sound of a metronome-like device. Eventually, the movement changes in some subtle way and thus begins another series of repetitions. At times, the repeated, rhythmic movement coupled with the positional relationship of the two human bodies creates a silly or sexual inference, which is momentarily comical. For a while, mental interest builds as a third performer, holding a camera, moves about the dancers recording the dance. We are also watching two large monitors behind the dancers display video recordings of the choreography as shot from different angles. The cognitive dissonance occurs when you realize that the footage seen on the monitors is not what the camera person is seeing or recording in real time based on her movements and location. The program notes state that the group’s mission is “to look for intuitive ways to create motion and focus on the process of connecting external devices to the body through diverse experiments.” Unfortunately, they were so absorbed in connecting to external devices that they failed to establish a significant human connection.

The evening concluded with Touchdown, an admittedly low-tech solo that brilliantly conveyed life’s poetic complexity. The work, choreographed and performed by Hao Cheng, a mathematician-turned choreographer, uses quantum physics as an analogy for life and its uncertainties.

After an introductory monologue, describing how electrons orbit a nucleus while emitting energy in the form of light, Cheng falls onto the chalkboard-surfaced stage strewn with pieces of chalk. He struggles about like a fish out of the water until he grasps a piece of chalk and draws a circle on the floor around himself. He draws more and more concentric circles creating a larger system but maintains his position at the center. Seeking to expand his system further without budging from his spot, he stretches into impossible positions to draw more circles – until he collapses.

Cheng finally moves about placing pieces of chalk at various points on his circular system. As the system becomes larger and more complex, Cheng is tossed about in it – rolling, spinning on one knee, balancing, and falling. At the same time, he starts drawing new chalk pathways outside of the system. After multiple attempts, he manages to stand erect. Holding two pieces of chalk in one hand, he starts drawing two circles at once. The newfound capability fuels more energetic movement spiraling upward into the vertical space and back down across the smudged chalk creation. Chalk pieces chip off and fly all over the place as colored dust particles hover in the air caught by the light. One marvels at the complexity and messiness of it all. Suddenly the stage goes dark. Then two tiny points of light appear and dance together in the darkness before they are extinguished.

Japan Society’s contemporary dance festival showcased a new generation of engaging and skillful East Asian performing artists, who are generating refreshing work around new and old ideas. Thank you, Japan Society, for keeping the lights on. 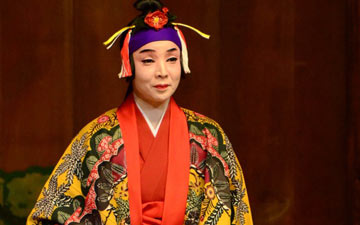 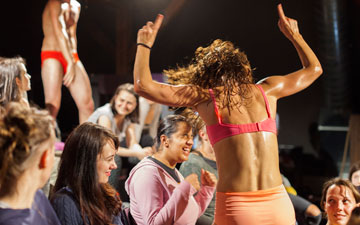 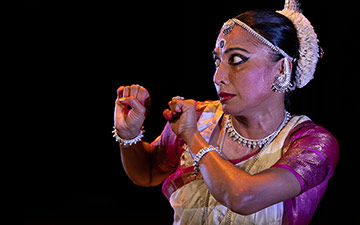