Sitting outside on a balmy summer evening in London, watching the performances of East Wall unfold against the backdrop of the imposing Tower of London is a rare treat.

Life gets even better when the two impressive music bands – the Gold Vocal Collective and the East Wall Band fill the air with their loud, stirring music. Drums the size of a car are hit with such gusto that the noise must carry way beyond the Thames below us. Both singers and musicians are raised on separate balconies above the long rectangular stage, framed by the massive wall behind them. Between them they create a crazily eclectic range of music and vocals: Rap, Funk, Rock, pop, classical and opera. The clash of music styles which is a theme of Storm the Tower continues with the military sounds of the Band of the Irish Guards who march on stage in their immaculate red uniforms and busy black busbies.

The cacophony of sound, voices and music is matched by the variety of dance styles performed by over 150 performers from ten different dance companies, choreographed by four early career choreographers – Joseph Toonga, James Finnemore,  Becky Namgauds and Duwane Taylor as well as Hofesh Shechter who directs the whole spectacle.

As well as providing opportunities for over 300 young people in London, what this epic project culminates in is dance on a mass, public scale. Enabled though the ambitious collaboration between LIFT, Historic Royal Parks, East London Dance and Hofesh Shechter, it’s thrilling to see so many bodies, black, white and brown, dance students, professionals and community groups on stage performing to live music with an energy that would defeat an army.

Touching on the stories of the various people who have formed the history of the tower since William the Conqueror build the first part of the Tower in 1066, East Wall is a celebration of history. Not just a glorification of the Tower’s past but a realistic nod to its often-murky realities with its massacres, be-headings and prisoners; its royal inhabitants, crown jewels, military families, ghosts, menageries and of course the ravens who tonight periodically fly above the turrets as the performance progresses.

Costumes by Louise Bennetts of the London College of Fashion are flattering and lightly baroque – white ruffs, cuffs or arm bands, waistcoats, baggy knickerbockers and large frilly night shirts to allow for the vigorous movement which ranges from contemporary dance, hip-hop, krumping to folk and courtly dance. The various styles of the five choreographers are effectively woven into one big piece and are linked by their incredibly released, loose limbed physicality.  Gravity embracing floor work fluid actions and fluctuating bodies contrast with the solid verticality of the wall crafting a memorable image of old architecture and modern movement.

After the spectacular musical opening, members of Big Deal Dance & Just Us Collective spill out from behind the black curtains backstage. A succession of dancers, moving slowly like a migration of peoples arriving in a foreign land, sets the theme of bodies in flux. Sedate yet athletic movement choreographed by Toonga drives the dancers determinedly across the vast space.

Finnemore’s choreography for Incognito Dance Company and Shift reveals a solemn woman, stately and aloof, moving through her subjects who support and carry her initially. The tide of goodwill changes and she dances against them until she collapses backwards into their outstretched hands as if surrendering to the guillotine. Rock music adds a tragic intensity to the performance and the demise of a queen.

Taylor’s movement style, influenced by krumping and hip hop, portrays a tribe of women, led by their fierce warrior leaders, who give outstanding performances fuelled by attitude.  Angry, war-like dancers from One Youth dance & University of East London Dance Collective battle it out to the bitter end through punchy gestures, body popping and karate kicks. Their bodies crumple to the ground one minute, only to spring up again in yet another attack.

In contrast, for Namgauds’ work, bodies roll calmly on stage like an ocean tide. The music which has an eastern flavour makes me think of foreign conquerors or courtly visitors arriving by sea, tactical and cautious at first. However, as this impressively large cohort of performers from Cando2 Youth Dance, Elevate Dance Company and One Youth Dance find their feet, rising up from the ground, their display of capoeira fused with martial art and contemporary make them a forceful bunch.

Finally, the blood thirsty duets in Shechter’s choreography for his young company Shechter II are hilarious. Like scenes from Horrible Histories the dancers stab, shoot, throttle, impale or punch their opponents before grouping together in unison to perform what looks like a blend of Middle-Eastern folk dance and Irish jigs. From violent, power hungry royalty, to ordinary people or shuffling dispossessed migrants, the performers seem to embody all the different characters who have passed through the gates that stand in front of us, across the moat. 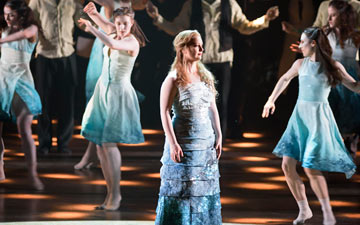 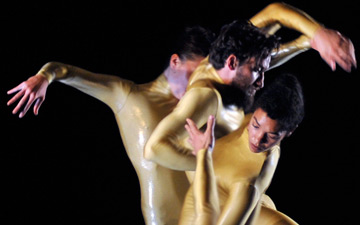