Hofesh Shechter likes to tinker. His signature work, Uprising, started life back in 2006 in the intimate surroundings of the 300-seat theatre at The Place, before growing in scale over the next few months to take in the Queen Elizabeth Hall and Sadler’s Wells (a theatre seating five times the maximum audience of that first venue). Not content with that escalation, three years later, Shechter presented an XXL sized Uprising as a rock gig with dance attached, at the Roundhouse. Now, he’s back with his company’s first entirely new work for a while and my initial reaction to Sun is that he still needs to tinker some more. On past form, we might imagine that by 2016 this could be a great work but, for now, although it brings a compulsive fascination about what may happen next, it fails to ignite the same sparks of excitement as his past work has done, even at those first presentations.

One of many unique facets to Shechter’s work is that he creates both the music and the movement. In Sun, this holistic vision incorporates the full-on, thunderous roar of electronic sound, regularly mellowed by softer moments, silence and sampled snatches of Nat King Cole singing Let’s Face The Music And Dance, bagpipes playing Abide with Me or some Icelandic post-rock from Sigur Ros. Musical development aborts in mid- sequence and the lights go on and off abruptly. Now, I love me some deconstruction but these bitty, stop-start, interruptions are stretched beyond the breaking point.

Greater impact was achieved through effective, joined-up design in Lee Curran’s chalky wash lighting, the simplicity of Merle Hensel’s curved back wall and the eclectic light hues in the baggy costumes by Christina Cunningham (from Pierrot to seventeenth century rustic). And an opening voice-over from Shechter announced a sneak preview of the end, so that we knew where “it was heading”. Opening up this idea of the performance as a journey with a glimpse of its final destination was funny and inventive but it left the residual ongoing dilemma of trying to work out how we were getting there. It was like being bundled in the back of a motor, with the stereo channel-hopping on full blast, while being driven helter-skelter on a wild car chase that started in Reading, ended in Bracknell but journeyed via Southend and Croydon. Trying to make sense of anything was futile.

The device that was over-cooked the most involved portable plywood screens, held by dancers like shields, which resembled life-sized cardboard pieces in an old-fashioned board game. Sheep, lots of them, and a wolf – usually appearing alongside an offstage scream – were the regular leitmotifs but there were also “pieces” that evoked colonialism with identical native figures being confronted by a Victorian explorer, perhaps presumed to be Dr Livingstone! This imagery was powerfully reinforced to me at the end – perhaps unintentionally – when these plywood screens were left scattered, face-down, around the stage, appearing like Zulu Shields left where they fell on a deserted battlefield.

The Shechter Company is without hierarchy, a truly egalitarian ensemble that gels together superbly in the throbbing, folksy, athletic group harmonies. When the Nat King Cole recording of Irving Berlin’s classic anthem was finally allowed to run its course, the dancing was tight and thrilling. There were many of these moments but there were also gaping gaps between in which screams were heard, people were silently shot, sheep grazed (or even bizarrely turned somersaults), or the lights went out again. And it was at these times that I cared less for where the journey was headed but more for the next outburst of dance. There is surely something excellent lurking within this work, the intent of which I have failed to perceive, but I will just have to wait for The Choreographer’s next Cut to get it. At least we can be fairly sure that there will be one. 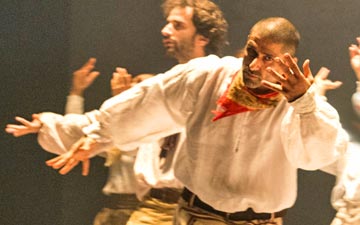