The Japan Society consistently offers up some of the most eye-opening, refined evenings of music and dance in New York. One senses a real care in the curation; even a novice can tell that the artists being presented are masters of their form. They leave us hungry for more.

This weekend, the Society is presenting a program of dances from Okinawa, some dating from the eighteenth century and before, others from the late nineteenth and early twentieth century. As the musicologist James Rhys Edwards explained in an informative pre-performance talk, Okinawa has a distinct musical and dance style, whose costumes, tonal structure, and stories differ from those of the more familiar Noh, Kabuki, or Gagaku genres.

The main instruments – koto and sanshin – are similar to the banjo and dulcimer, which gives the music a distinctly folksy lilt. (At times, to my ear, it sounded almost like Appalachian music.) The musicians whistle and vocalize; there are choral passages, moments of call and response. Sometimes the dancers join in the singing. This is music with a bit of swing, and that swing is reflected in the dancing. Like all Japanese art, Okinawan dance is stylized, but here the stylization is counterbalanced by playfulness and warmth.

The evening was divided into two parts, with the first half consisting of popular dances created after the end of the feudal era, when this originally aristocratic art left the palaces and was introduced to the towns. In the second half, which offered a sampling of the classical tradition, the dances were more formal, more contained, and more subtle. The evening ended with a dance of extraordinary beauty, “Mutu Kadiku,” set to a poem about springtime. The dancer, Izumi Higa, wore a wide, blossom-shaped hat known as a hanagasa, then removed it, delicately holding it by its brim so that the colors and contours could be admired from all sides. Higa swayed slightly, as if moved by a soft breeze. Her expression was benevolent; her eyes were half closed, as if lost in a dream. She moved with great fluidity and softness, but without the seriousness of Noh. It was a scene of pure loveliness.

There were lively passages as well. A favorite was a dance of flirtation, “Kanayo Amaka,” in which the young lovers stole teasing glances at each other and then held hands and circled around, almost as in a square dance. (I don’t remember quite so much touching in other Japanese dance styles I’ve seen.) After kneeling at the back of the stage, the woman (again Izumi Higa) removed one arm from her kimono – apparently a typical Okinawan detail – and then returned to frolic some more. Her partner (Satoru Arakaki) mimed showering her with water from a wooden ladle as she washed her hair. The two smiled mischievously at each other, bobbing slightly to the beat.

In another flirtation dance (“Nakazatu Bushi”), I was struck by the great rush with which the woman (played by a female impersonator, or onnagata, Kota Kawamitsu) ran onto the stage to meet her lover. The impulsiveness of the gesture was surprising. Then the two played a game tug-of-war with a fan.

Even the classical dances included some comedy. In “Shundo” the stage is shared by two women performing in the dignified classical style and two masked men in women’s clothing. It’s a satiric dance in which the men in drag grotesquely ape the delicacy, smoothness, and harmonious movements of the dignified ladies. (I couldn’t help but be reminded of the two ugly stepsisters in Frederick Ashton’s Cinderella, also played by men, failing miserably in their attempts to mimic refinement.) The program note assured that the dance was meant to poke fun at the clumsiness of the two lowly characters, but it seemed to me that the mockery went both ways.

All of the performers were impressive, distinctive, unique. In addition to Higa, Satoru Arakaki stood out for the expressiveness of his face, the playfulness of his footwork, and his ability to freeze in place for just a millisecond, creating a clear picture that lingered in the mind, like a picture postcard. The fabrics, dyed with stencils in elaborate patterns of flowers and waves, were equally fine. After the curtain calls, these distinguished artists invited members of the audience onstage to dance along with them. All formality melted away; Okinawans, it turns out, know how to party. 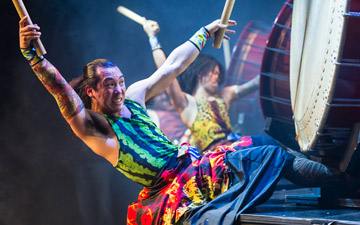