The word transcendent gets tossed around a lot, overused, especially in the performing arts. But if one performer deserves it at this year’s Fall For Dance Festival, it is Aakash Odedra.

The Birmingham-born dancer performed the U.S. premiere of Nritta, an exquisite solo work which radiates grace in its purest form. Odedra is trained in the classical Indian dance traditions of Kathak and Bharat Natyam, but he has been collaborating with contemporary choreographers for years, including Sidi Larbi Cherkaoui, Akram Kahn and Russell Maliphant to name just a few. Nritta begins with quiet, centered, meditative movements, and then Odedra takes flight. He jumps, he spins, he smiles at the audience, as if to say, this is a gift for you. While most of the choreographic vocabulary is obviously taken from well-established, traditional moves, Odedra gives them a new life, repurposing them into a well-paced stretch of choreography, full of contrast, rhythmic complexity and wit. When he stomps his bare feet on the stage, you do a double take, the sound as crisp as a pair of tap shoes. His hands unfurl like flower petals, his leaps are buoyant and powerful, his spins sharp but controlled, like the best break dancers. Nritta ends as it begins, in a prayerful mode, and while one wants to see more, one is left glowing with gratitude: to have seen grace personified through dance, at this level, is nothing less than sublime.

The other starry highlight from Program 5 was Sarasota Ballet’s staging of Sir Frederick Ashton’s Les Patineurs. The delightful one act piece mimics a Victorian ice skating party, complete with leg of mutton sleeves, tight bodices and furry hand muffs. Even in this short work Ashton manages to fill it to the brim with complex jumps, whirlwind turns and witty, effective pantomime. It feels almost novel to see the full breadth of the music—a Constant Lambert arrangement of Giacomo Meyerbeer compositions—used, and used so well. Not a moment is wasted, not is the piece overworked or baroque. Playing with the showy nature of ice skating culture, using pantomime to communicate classic motifs, and Sarasota Ballet do it so well you’d think they had just skated off an old Victorian postcard. The White Couple, danced Sunday by Danielle Brown and Jamie Carter, are Strictly Ballroom perfection, the over-the-top accomplished couple whipping out wild moves and well-whitened smiles. The Blue Boy, danced by Logan Learned, is the virtuosic jester, the host of the party, and his sarcastic winks at the audience were the icing on the cake. Blue Boy knows what a ridiculous, gingerbread confection it all is, but at least pretends to love it all the same. Some of the choreography, double pirouettes in attitude devant (en pointe) and grand jetes with nothing more than a coupe back en face as preparation, would make even the most glittering professional troupe balk slightly. Ashton was never easy. But Sarasota Ballet perform his quirky transitions with aplomb, as if they could do it in their sleep, and actually enjoy doing it. Based on theme alone, Les Patineurs could so easily be written off as a superficial holiday treat, but its merits are much higher than that.

If Wayne McGregor | Random Dance is your thing, there is no reason not to like Far. If his extreme contortions of dancers’ bodies are not to your taste, feel free to skip it. Seeming to lack any choreographic and musical structure, it is loaded with extreme, grotesque posturing – wormy writhing limbs, hyper-extensions and high curves. The music, by Ben Frost, is amplified too much, and actually hurts the ears. With McGregor, the pain is a choice, a cross for the audience to bear. In visual art, the grotesque tends to symbolize or allude to something. But with McGregor, it is not clear, at least to me, what purpose his visual and aural contortions serve, beyond surface level shock value.

Pontus Lidberg’s This Was Written on Water is a Fall For Dance commission, and thus, a world premiere this season. Starring American Ballet Theatre pinup stars Isabella Boylston and James Whiteside, it has potential, but fell flat, making the mark as a pretty pas de deux but not much more. With paper flower petals falling from the rafters, it is a little cloying, the saccharine quality only reinforced further by a high saturation of flinging embraces, which lacked the purposeful passion of a Neumeier or MacMillan pas de deux. Some of the lifts and turns were nice, and the theatrical romance was strong on both sides. Maybe Lidberg has something simmering on another burner. 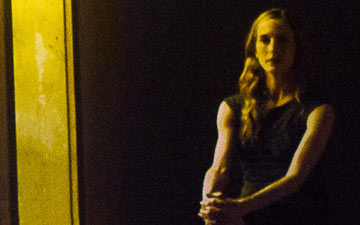 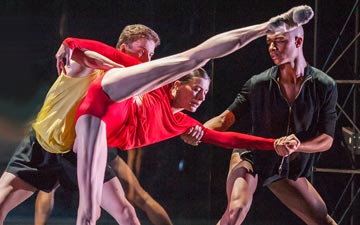