It’s amazing just how disparate the dance is that can make it to the Place Prize finals where 200 hopefuls were whittled down to 16 and now to 4 in the nightly finals shows which run  through to the 27th April when the winner is chosen. All are trying to innovate, entertain and connect with the audience in interesting ways, if for me none of them quite scored a direct hit on all the pillars.

Rick Nodine’s Dead Gig – a solo homage to the nineteen sixties’ rock group The Grateful Dead – is appealing in its reach back toward the innocence of inspiration. In threading movement with both live and recorded text, he regales us with waves of rock history trivia, personal reminiscence and a portrait of the sixties zeitgest as it bled into his own eighties youth. Whether we are ‘dead heads’ (fans of the band) or not, his earnest curiosity carries us along through live recordings of several songs.

Nodine’s approach to the entwining of sixties rock and contemporary dance is a fluid integration of release and floor-based contact, as well as a playful demonstration of the postures and swaggers native to the world of rock. This works well when the narrative frames it clearly, and one can almost pick out styles the way we do when people-watching at a crowded gig. There is the unbridled rock-and-sway of male hippie freedom, and the light parody of a vocalist’s ecstatic convulsions. Still, much of the spoken word is padded with a kind of vague smoothness – overly-aerated spinning or pacing and with sudden, bold gestures of the arms. Props, text, and lighting are used with distinction though, and Nodine also gives space for the music to speak for itself. Above all, his locating of free-bodied, improvisational movement on the stage has heart and reverence. In doing so, he delves into the mystery of the dance impulse itself, as it is stirred and revealed in the love of music.

As a startling contrast, Ricardo Buscarini’s Athletes plunges us into an aesthetic world that experimentally disturbs, surprises and repels us in its cold display of inhuman sci-fi ‘beings’. Silence, costumes and stage effects dominate here: the three dancers appear in shiny white bodysuits that encase their skulls, expose their whitened faces and bear externalized ‘spines’ with jutting tails. They confront each other with blackened, entranced eyes, then collude in a chain of mechanistc movement that drives them diagonally across the stage. When one of the trio softens, crumples, and rolls away (in what is perhaps the one human moment here), the remaining two are seized by the histrionic, hollow core of the piece. To the nauseating strains of Bernard Herrmann’s Scene D’Amour, they lock eyes and spiral round and into one another at an excruciating snails’ pace, before locking into some kind of soul-sucking ‘kiss’. One of them melts foetally (or fatally?) to the floor, and the other makes its way – in the angular, floor-bound mode that seems innate to this species – to downstage centre, where it, too, curls up. This symmetrical triangle crowns a careful geometry that complements the stylized sterility of this world. The whole crisply over-staged vision succeeds in its artful alienation, no doubt. But for all its otherworldly effects and occasionally clever contortions, it offers no real allusion to the human experience – rather, a failed anthropomorphosis, or, to judge by the music, an overblown travesty of ‘dark love’.

From cold white aliens to a nimble young woman in a short yellow dress – this might suggest relief and freedom, even flourishing, and whilst such feelings do flit through Eva Recacha’s The Wishing Well, it is premised on a hint of something sinister itself.

The zestful Martha Pasakopoulou bellows a belligerent song in Greek, then cavorts round the stage with careful punctuation – too careful, it soon becomes obvious, as the sibilant recordings of Recacha’s repetitive chants and songs intervene, hemming her in, breaking her stride, provoking and interrupting.

This work is driven by the tension between language and movement in a child’s world. A kinetic reverie of sorts, its word-driven gestures are immediate and sometimes literalist: ‘wishing well….wooosh…’ as the dancer spirals around. The approach is a playful one, with an almost synaesthetic immediacy, but in the end its interest is passing and has limits that are not always worth the push.

Recacha’s solution, it seems, is to cut it up, comment, reframe and repeat it. And she has Pasakopoulou lost in a labyrinth of chanting, mnemonics, lost memories and deja vu, a haunted but resilient child. There is third person description too, perhaps intended to give some breathing space, but it is not quite enough to rescue the piece from its solipsistic feel. This is a child’s inner world, granted, but externalized context would help it along. That said, Pasakopoulou shines, and the choreography is the most engaging of the night. For its display of the performer’s strengths alone this work is more than worthwhile.

And then, to round out the evening’s eclecticism, H2Dance arrive in full nineteen-eighties panoply, all flouro pink and blinding sequins. Hanna Gillgren and Heidi Rustgaard announce they will dance together, and start in synchronicity, before confiding in us their recent discovery of ‘couple therapy’.

The wry transparency of form in Duet is something of a joy, as dance and speech reveal the fruitful friction of this ‘couple’ before our eyes. Very quickly, they announce developments in their baseline routine of rhythmic swings. – ‘Let’s add in more arms’, they say – then follow legs, and a ‘provocative’ pelvic focus that triggers an orgasmic meltdown, for Hannah at least. Her toilet humour is calmly contained by Heidi, the more stoic of the two.

As the characters and conflicts of the pair emerge, so too does the ironic harmony of their rapport. Both do solos, supported by the other with props and prompts to the technicians. Hannah’s selfish hedonism blooms beside Heidi’s terse forbearance, visual gags abound, and the truth is revealed with just the right tone of resignation. ‘We’re like salt and pepper, aren’t we Heidi? Like Tom and Jerry?’ The two settle, knowingly, back into synch. Their straight-faced, comic portrait of a couple is insightful and skillfully shaped but, as with much of the night, a surprisingly trite quality of movement prevails.

Jessica Sabatini is a writer of fiction and Arts journalism. She has been dancing for fifteen years and has trained in a number of forms, but is now passionately involved in contact improvisation. As an Arts collaborator she has a special interest in interdisciplinary practice, particularly bringing the worlds of movement and language together. 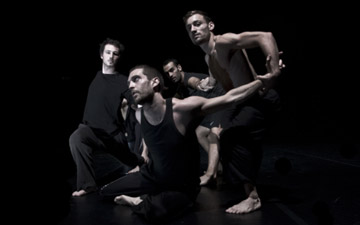 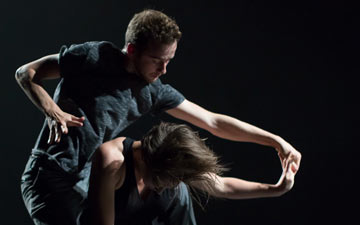 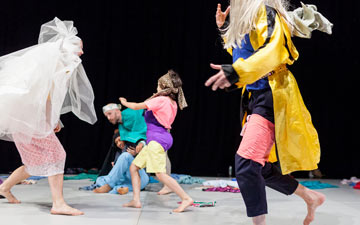