Why do choreographers adapt plays and novels? The commercial lure of familiar tales is appealing – but not infallible. This spring Alice’s Adventures in Wonderland at Covent Garden was a predictable sell-out but Aladdin was not the cash cow Birmingham Royal Ballet hoped.

Northern Ballet’s The Great Gatsby, conceived by David Nixon and Patricia Doyle, has sold out Sadler’s Wells this week, suggesting the continuing appeal of a 90-year old title. Leonardo DiCaprio’s new film is a happy coincidence. The Robert Redford Gatsby has endured too. For a young Nixon, “It was always in my mind as a student. Mention the title and people always react – but possibly to the era rather than the story itself – which they tend not to have read.”

Nor had I, despite being a student of Eng (and American) Lit, so I arrived at Sadler’s Wells – sadly not in Gatsby’s yellow car – but like Gok Wan, Craig Revel Horwood, Janet Street Porter, Beryl Grey and Sarah Hadland – happy to brave the red carpet and flashing cameras that for once gave the Wells a sense of occasion. Here was an audience eager to experience Nixon’s take on Scott Fitzgerald’s novel purely as a dance theatre.

The ballet’s synopsis is a worrying 1,200 words. There are no mothers-in-law in ballet Balanchine famously said. How then to convey that Daisy is Nick Carraway’s second cousin once removed, wife of Tom Buchanan – and former sweetheart of the enigmatic, allegedly great, Jay Gatsby?

Fortunately, the direction and elegantly spare designs by Jérôme Kaplan make situations and characters easy to read. If you don’t know the novel – however – you may well need the prompt of the synopsis. Nixon’s choreography visualises the narrative but does not individualise the characters.

Cleverly Nixon and Doyle’s incorporation of a young Gatsby and his infatuation with Daisy (rather a Little Bo-Peep saccharine ideal) provides some dramatic context of what motivates the elusive fraud that is Gatsby.

The Richard Rodney Bennett compilation that scores the ballet opens with his overture to Murder on the Orient Express – of an age with the Redford Gatsby. This immediately defines the era and puts the audience in good humour –  to which Nixon cleverly introduces the protagonists, and their back story.

The score gives the first act thrilling propulsion. There is only one moment of introspection – the duet for Daisy and Gatsby that closes the act. Otherwise emotions are sacrificed to narrative need.

Perhaps deliberately Nixon’s Gatsby remains ambiguous, colourless in his choreography and Tobias Batley’s impersonation. So too with Daisy. There is no sense of character from Martha Leebolt’s vapid blonde. Is this Fitzgerald’s point – Daisy the empty vessel for men’s projections of womanhood?

The ballet succeeds most in its incidental scenes – though everything is presented fortissimo. Most clever is the way in which Nixon depicts Myrtle and George Wilson, the catalysts that ignite the fault lines of the other characters’ casual duplicity. When we first meet mechanic George in his garage, his variation with a car tyre reveals the circling repetition of his marriage to Myrtle. Their subsequent cat-and-mouse duet is equally revelatory – narrative visualised in dance. The performances of Benjamin Mitchell and Victoria Sibson were the strongest of the evening.

Nixon is clever in his choreographic references. Amid the pastel-coloured tulle skirts and flicking tail coats of Gatsby’s sybarite partygoers there is more than a hint of Frederick Ashton’s La Valse. Nixon too steps through Thoroughly Modern Millie and a syncopating Kenneth MacMillan. Less happily Nixon replicates MacMillan’s prancing soldiers. The second act – other than the mirror duet for Daisy and Gatsby – becomes melodramatic, without the unsettling ambiguity of the novel.

So, why do choreographers adapt plays and novels? Dance expresses the emotions and fills the spaces between the mechanics of telling a story. Existing characters and dramatic situations are not necessarily easy shoo-ins for choreographers.

With The Great Gatsby Nixon does not succeed in making us care for a frankly unlikeable set of misfits and their casual duplicity – but at the same time he creates an authentic visualisation of Fitzgerald.

The Sadler’s Wells audience was unambiguous in its reaction to such an athletic, precise and cultivated ensemble. Mr Nixon – Sadler’s Wells says you and your company are swell. 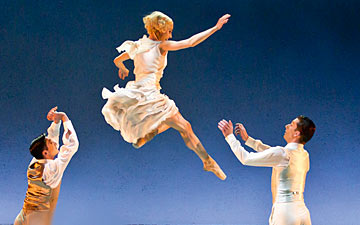 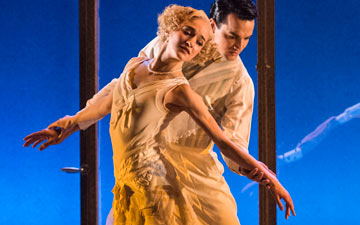 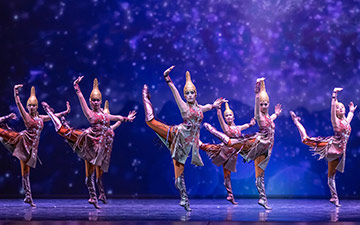