New Movement Collective was founded in 2009 by 11 dancer/choreographers, many of them connected with Rambert (Dance Company). Their aim is to perform unusual events in unusual spaces, working with adventurous collaborators. Last year’s project, Casting Traces (review), took place in a former dairy in Battersea (now Testbed 1); NEST occupies a disused former chapel in the West End. Built in 1888, the Welsh Chapel was turned into a noisy nightclub in the 1980s, then into a dodgy pub. It’s been reclaimed as a performance space, to be redeveloped and run by Stone Nest, a recently established arts organisation, which commissioned NEST to bring the building back to life.

The promenade production is based on Homer’s Odyssey, the epic tale of Odysseus’s ten-year wanderings as he set off for home after the Trojan War. Touring the different levels of the battered building during the performance is quite a journey, albeit only a 75 minute one. Intrepid travellers are provided with hip flasks filled with cocktails or soft drinks to revive their spirits en route. Helpful ushers are on hand to serve as divine guides. (Odysseus received a lot of assistance and interference from the gods.)

We’re led to a balcony under the domed ceiling, looking down on figures in white on the floor below. They tumble and cling to tall metal structures like sailors hanging onto the spars of a tempest-tossed ship. The scaffolding frames were designed by architects from Studio Weave to suit the towering space and the narrative thread of a sea voyage to strange places. A stormy sound-score by Anna Meredith and Christopher Mayo reverberates through the building, sweetening sometimes into seductive melodies.

Disorienting lighting effects by Marshmallow Laser Feast challenge all sense of perspective. In the opening sequence, patterns of light suggest surging waves, lasers criss-crossing scrambling duets in which one partner seems to be trying to rescue a drowning shipmate. We may have joined Odysseus’s crew in the first of many storms that beset them, stirred up by the gods as punishment for their misdoings.

Does it matter whether you can recognise episodes from Homer’s Odyssey in the various sections of NEST? No, if you’re enjoying making your own discoveries, watching agile performers in mysterious set-ups without any expectation of a narrative line. But yes, it’s intriguing to spot references to the unfolding saga in the confidence that the wanderer will find his way home. Or at least that’s my interpretation of what I experienced.

The choreography, created by the 11 core performers, is highly organised in most of the sections. In the first shipwreck scene, bodies in turmoil hurtle off each other, form up in lines, combine to clash the metal frames together and revolve them at speed. Maybe the ship has been whirled between the twin dangers of Scylla and Charybdis; maybe the crew have been trapped inside the structures to make them sail away from the Land of the Lotus Eaters, a dopey paradise.

The action moves to an alcove with a round reflective mirror – the cyclops Polyphemus’s single eye. Odysseus had to use all his cunning to escape from the cyclops’s cave. Here, Jonathan Goddard as Odysseus seems to be remembering his wife, Penelope, dreaming of his return; or perhaps alluring Gemma Nixon is not Penelope but the enchantress Circe, who held him pleasurably captive.

Next, we descend down flights of stairs to the underworld, the Land of the Dead. Blue neon tubes illuminate stumbling zombie figures, shrouded in mist. (Signs outside the building’s vents reassure passers-by that smoke is part of the performance, not a fire in the basement.) Odysseus encountered the spectres of dead crew members, departed heroes and a host of lost souls before continuing his voyage in the land of the living.

Back upstairs at ground – or sea – level, performers sway as though in the hold of a ship in a swelling sea. Dapples of light suggest phosphorescence, lute music the sound of siren voices. Swirling clusters of dancers support their fellows aloft as if swimming to certain destruction. In Homer’s account, Odysseus saved his crew by plugging their ears; only he could hear the sirens’ singing. We leave Goddard distraught and alone as we’re instructed to explore the building on our own for 15 minutes.

Installed in nooks and crannies, in rooms and corridors, performers, paintings and projections are to be found: a harpist, a prophet, a woman caught in the threads of a loom (Penelope?), pig-headed men transformed by Circe’s spell. The sound of yet another storm summons us back to ground level, where we rediscover Goddard, making his way towards enmeshed metal structures that now resemble a palace – Odysseus’s home on the island of Ithaca.

He’s not alone, although he’s lost the last of his crew. He still has to deal with interlopers who coil and lunge around him until, finally, he encounters Penelope. Their duet of cautious, tender rapprochement (can they really trust each other?) is a double one: Goddard with Nixon, Renaud Wiser with Malgorzata Dzierzon. The ending is intimate, hard-won, human-scale in a labyrinthine space for a journey undertaken by spectators as well as performers.

Dzierzon is credited as the producer of NEST, so plaudits must go to her for overseeing such an ambitious and successful undertaking. The production has a 30-strong team of artists and technicians, not to mention fund-raisers and supporters. Members of the Collective do much of their own marketing, with Joe Walkling designing their print and digital media, including an origami programme leaflet. All together, the multiple collaborators have worked out the right balance between structuring a performance so that everyone can see what’s happening (unlike most site-specific events) and allowing spectators the freedom to explore the building in which it takes place. 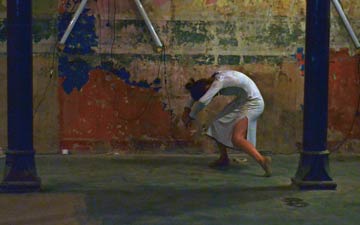 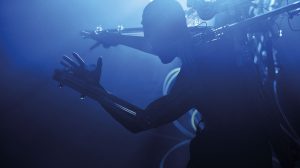