New Movement Collective is a group of independent artists who set out to challenge perceptions (their own as well audiences’) through performing in unusual spaces. They collaborate with different disciplines and technologies – architecture, art, film, digital capture, as well as music and the spoken word. Funding is ad hoc, relying on grants (if available), donations and supporters curious to find out what they come up with.

Collapse takes place beneath and above the Festival Hall in unpredictable weather. Spectators are handed wooden blocks as entry tokens, and invited to place them on totemic structures in the undercroft beneath the Festival Hall ballroom. A resounding crash of the blocks signals the start of the aptly-named work.  An intermittent voice-over alerts us to our physical reactions to startling events: fight or flight, as silently moved screens hem us in.

Lighting picks out Jonathan Goddard’s response, an anguished run in place as if in a nightmare of being unable to make any progress.  In the rubble behind yet another screen, Alexander Whitley is similarly trapped. Time and place change as they form a group with Clemmie Sveaas, Renaud Wiser, Patricia Okenwa and Joe Walkling. Spectators peer at individual performers rooted to the spot, twisting and arching their torsos as if possessed. Cellist Oliver Coates’s thumping music, combined with strobe lighting, suggests a disco rave as the six link up in a line dance.

Sveaas and Wiser attract attention as they connect in a duet, at first like grebes courting in synchronised neck waves. Then, once the duet expands into wrestling holds and tumbles, with pieces of clothing being removed, everyone moves well out of the way. In the distance, behind translucent screens, Goddard and Whitley also strip off. Agitated music (live cello and electronic orchestration) dies down as all four dancers clothe themselves in formal black and white outfits for a courtly quartet. Maybe this is what NMC’s website for Collapse means by ‘the cyclical nature of societal evolution’, as courteous behaviour degenerates into aggressive grappling.

What looks like contact improvisation has been choreographed and rehearsed by the collective. (Malgorzata Dzierzon is credited as Collapse’s producer.) The performers need the sharpest of reactions to deal with the unexpected, negotiating routes through bemused and bedazzled spectators. Strobe lighting and digital projections become disorienting as a series of sculptures are introduced between the mobile screens. Made by ScanLAB Projects, they consist of laser-cut layers of MDF panels, fanning out to form figures in motion. Scanned 3D images of the dancers’ movements are projected onto the sculptures and the screens in interlaced patterns of light.

The thinking behind the magical effects and post-lenticular technology is partly explained on NMC’s website. (I tuned out the irritatingly know-all voice-over.) It’s to do with the nature of observation and recall, of where we are as a society and what we might leave behind. Digital imagery could disintegrate into dust, cities become ruins, civilisations collapse without trace. Meanwhile, even short-term memory can be unreliable, as the performers repeat (or do they?) the same running-without-progressing that they did at the start.

Spectators are urged through headphones to climb five flights of internal stairs to the roof of the Festival Hall overlooking the Thames. Be aware of your body’s reactions, the voice-over urges: are your lungs and thighs aching, is your heart pounding as you finally reach the outside space? What else is there to think about in the concrete stairwell? Reassuringly, the river is still flowing with the tide, the city’s buildings, old and new, standing on the relics of previous ages: collapse has been followed by renewal. The view is more enticing than the dancers running up and down, falling and interlocking, as Coates plays his mournful cello besides a metal sculpture of a lion.

Coates starts to distort his melancholy melody as the dancers disperse, joining audience members sitting on benches in the evening wind. Flags flutter, the London Eye ferris wheel glows red against the skyline and life goes on. The experience has been a rewarding one, though possibly more thought-provoking for the creators/performers, who have worked on it for ages, than for spectators following it moment by moment. Site-specific spectacles are hard to absorb as a whole: maybe you’ve missed a crucial moment or misunderstood a message – or maybe that uncertainty is the elusive point of the performance. 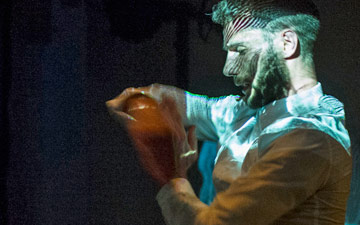 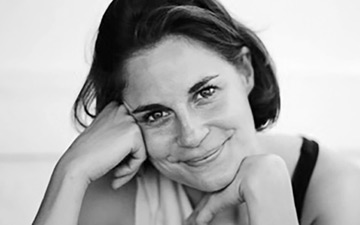 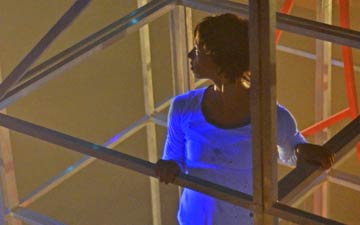