Schools’ performances are always good for the soul. To see new generations of dancers coming through is a wonderful thing and schools are often significant commissioners of new works these days and also bring back older or different works. So was my soul enriched at seeing this year’s Royal Ballet School (RBS) main stage performance? Well not fully – in terms of choreography it seemed one of the less impressive shows I’ve seen in the last few years.

When I first started going to RBS shows major choreographers were around the school. So David Bintley made specially-commissioned pieces for them and Kenneth MacMillan took young choreographers in hand (notably Christopher Hampson and Christopher Wheeldon) and choice pieces by MacMillan and Ashton were performed as well as characterful work by de Valois, for example. All very English, I know, but in broadening things I think the quality of choreography used has perhaps gone down over time. It’s also hard to judge the standard if well-known works are not performed. Although I didn’t see it English National Ballet School put on Balanchine’s Allegro Brilliante and MacMillan’s Soirées Musicales for example.

My choreographic low point this year was La Destinée, sadly at odds with it being the big number in the show and, by school standards, it must have had a small fortune invested in it. It seemed well-meaning in trying to compress elements of a MacMillan dramatic work into a single act played out in a ballroom of ever-happy waltzing folk. Essentially it was about a husband torn between his wife and the ‘other woman’ through whose lens we really see it. The three students did their resourceful best in conveying the drama of love, jealousy and unhappiness – not easy with life, and it’s relationship challenges, mostly before you. La Destinée looked a million dollars with costumes and a candelabra set by Gary Harris and I hope they will find new purpose because the specially-commissioned score was very derivative of Cinderella (if without the power and sweep of the original), and the choreography, by the school’s Head of Outreach and Teacher Training, seemed inconsequential and repetitive. The scale of this really demanded Bintley or a Bourne or perhaps an opportunity for Liam Scarlett to sharpen his not-inconsiderable skills further, secure in the knowledge that he knows how to move lots of dancers pleasingly and thoughtfully as well. A career choreographer anyway. That or it would have been better to dance Ashton’s exquisite La Valse, as they did in 2000.

RBS is much more aware these days of seeing their students needing to appeal to companies across the world and this year’s international choreographic dimension turned out to be very European – with work by Maurice Bejart and Jiri Bubenicek. Bejart’s Seven Greek Dances, performed in excerpt, is a joyous piece of crowd-pleasing froth to a Greek score by Mikis Theodorakis. The boys, stripped to the waist, look fresh off an Aegean fishing boat while the girls are rather incongruously in leotards.

Bubenicek also had his cast of 3 lads bare chested but there was more meat in his Canon in D Major (from his longer work Le Souffle de l`Esprit). To an electronically-augmented version of Pachelbel’s score the movement was contemporary, emotionally charged and rounded rather than snappily angular as so much new work is these days. It’s a huge celebration of the male body and that is no bad thing. Rather perplexingly it opened and closed with short set pieces involving 3 bright lights set towards the audience and the dancers in silhouette. It didn’t seem to add much value to an otherwise good-looking piece of work that the 3 final year boys danced with panache.

The Royal Ballet’s Valentino Zucchetti is gaining a name as an audience-pleasing classical choreographer of Draft Works in the Linbury. Sonata for Six was based on such a work but grown to 6 dancers. I don’t recall seeing the original but it got good mentions including a word or two from the FT’s Clement Crisp. Looked at on the main stage it felt rather lost and a little old-fashioned – 70’s red and dusty pink flamboyant costumes (also by Zucchetti) reinforced this. Zucchetti will bounce back. That leaves the surprise star work of the home-produced pieces as Youth Concerto by Lower School staff Antonio Castilla and Diane van Schoor. It was for students from the last two years of White Lodge and the first year of the Upper School. To a sweeping and perky piano concerto by Dmitry Kabalevsky, it showcased well the progression of the students in 3 short years and in good classical traditional work. Fresh, meticulously presented, it was a good opener to the afternoon, especially in fusing both schools together.

If the choreography was a mixed bag there was a clear flip side, or rather two. This year’s standard, particularly on the boys’ side, gave cause for celebration at the strength on show. And in many respects we weren’t seeing a full show either, as a number of students are already at work in companies – amongst others Anna Rose O’Sullivan and Marcelino Sambe are already dancing with The Royal Ballet and noted by fans. The star of the afternoon for me was Esteban Hernandez – a classically-sharp stage magnet of a dancer, off to San Francisco Ballet – lucky them and lucky him. The other flip side is the final Grand Defile – all unhappiness about anything whatsoever disappears over its 5 minutes and one feels only immense pride for all concerned. It’s worth going just for the defile I always think and to see a stage groaning with such dedication, hope and talent. 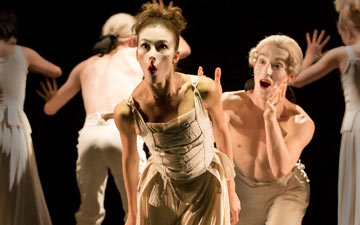 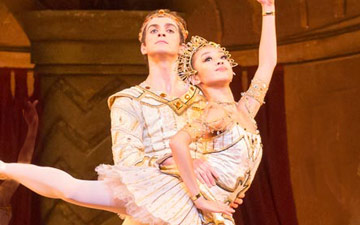