The Bolshoi season at Covent Garden continues with a third production by Yuri Grigorovich. This is his new version of Sleeping Beauty in its first presentation outside Russia. It shares qualities with his other works presented so far in this engagement: a belief in magnificence for its own sake, a lack of interest in presenting the finer details of motive and narrative, a celebration of the vast and splendid resources that the Bolshoi can command in terms of massed ranks of talented dancers. The production grinds the viewer into submission by the sheer sumptuousness and extravagance of its visual presentation, rather than trying to win over the audience with warmth and charm. It is impossible not to be impressed by the scale but not easy to be moved or feel involved with the characters.

Sets and costumes are by Ezio Frigerio and Franca Squarciapino. The costumes place us in the 17th century for Aurora’s christening and ball, and the in the 18th century for her awakening. The sets are very substantial and handsome, pillars of cream and gold, with a backdrop for the first half that might have been inspired by the seaport paintings of Claude Lorrain. They are rather more charming than the costumes which, though lavish, suffer from an unnecessary and distracting amount of glitter and sequins. This is not just a visual distraction. There is a disconcerting and very audible rattle from the ornaments on the tutus of the corps in the vision scene. The scenery for the final wedding celebrations however seems headed over the top with more gold than an oligarch’s bathroom.

The production is structured with a single interval placed after the court is put to sleep. This makes for a long time in the theatre, 65 minutes for the first half and 70 minutes for the second. There were a number of small children in the audience and this is asking a lot for very young attention spans. This is a fairy tale, but it is not conceived as a child-friendly production. It is there to display the magnificence of the company’s resources. Conductor Pavel Sorokin for the most part keeps Tchaikovsky’s much-loved score moving briskly along, almost as if he needed to catch a train from Waterloo at 10:31pm.

Grigorovich has not paid much attention to putting across the actual mechanics of the story. We see Carabosse’s threat about the pricking of her finger but there is no real explanation from the Lilac fairy that Aurora will fall asleep for a hundred years until woken by a kiss. The decision to run the work with only one interval means that the Queen is still wearing the same dress for Aurora’s birthday party as she did for her christening, which seems incongruous. When the Lilac fairy does come to direct Aurora to be taken to her bed, we do not see the court fall asleep. Rather surprisingly, at this moment when you might have imagined the designers would use all the means at their disposal to create a spectacular transformation scene with the forest taking over, all that happens is that the gates to the palace reappear. There is no magic. This seems true of the production as a whole. There is magnificence but no enchantment.

The same cream and gold sets are used in the second act where we meet the Prince. (It is hard to ignore the questions that arise internally: How come he doesn’t notice there is a palace there, and if he is there already at the palace why does he need a trip in the Lilac Fairy’s boat ?) But one must ignore the logic and enjoy the dancing on display.

There are some delights among the fairies in the opening scene, including Anastasia Stashkevich as the Canary fairy, and Anna Tikhomirova as the fairy Audacity. The latter in the finger-pointing variation is animated, alive, visibly enjoying her dancing and conveying that to the audience.

Ekaterina Shipulina as the Lilac Fairy projects a calm authority in her dancing but the lack of any explanation from her as to how she will save Aurora does not help her establish her character. She can easily defeat Carabosse, but then the Carabosse isn’t really very frightening, peevish and grumpy rather than truly threatening. Alexei Loparevich is the tallest dancer on stage by some way but seems hunched rather than commanding. He never looks remotely female. There is lots of thrashing around with a cloak but this does not equate to genuine menace.

Ekaterina Krysanova is Aurora, entering with a bright smile and looking sweetly pleased to find all these handsome young men surrounding her at her ball. She looks very fresh and dewy in the opening scenes, but maintains much the same charming youthful manner throughout the ballet, without adopting a more womanly tone at her wedding celebrations. In the Rose Adage she lifts her hand only a few inches from each suitor’s hand rather than raising it above the head for the longer balance that features in other western productions. This has a more dainty and less effortful effect (and on the plus side, it does not drag out the music as much) but perhaps leaves some of the audience feeling a little short changed. She is at her best in the solos that follow, technically confident and secure. Nevertheless the audience response to the end of the first half was somewhat more muted than one might have imagined for this much-anticipated visit.

Things brightened up enormously in the second half as soon as Artem Ovcharenko soared onto the stage as Prince Désiré with a huge, soft, effortless leap. There was a collective intake of breath. At last, some real grand-scale Bolshoi dancing. This is what we were looking for. Grigorovich has given the Prince plenty to do in his first scene. He doesn’t have time to be a melancholic figure, as he circles the stage in bounding leaps. The turns were all landed neatly, no fudging, and the air seemed to hold him up for longer than was possible. There seemed to be some magic here. He received a huge response from the audience.

There was a strong array of soloists in the pas de deux for the wedding scene. Kristina Kretova was Princess Florine with Denis Rodkin as Bluebird (a late replacement for Lantrantov). The White Cat and Puss in Boots (Yulia Lunkina and Denis Medvedev) had the most fun. There wasn’t necessarily that much chemistry between Krysanova and Ovcharenko, but the production isn’t so interested in motivation, more in grand effects, and those were delivered. It was a glittering, ostentatious performance, though not one to catch the heart. 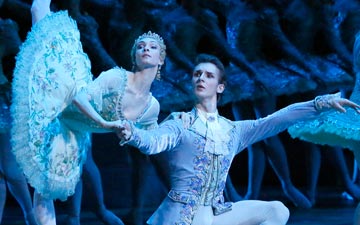 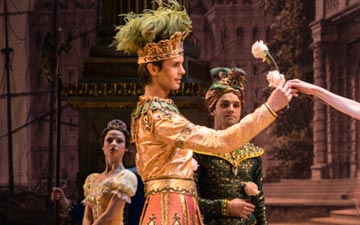 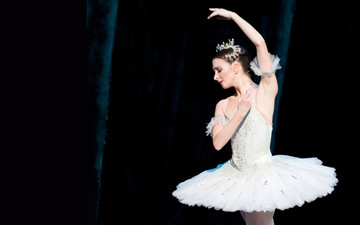