With Christmas lights and decorations steadily going up in stores and high streets across the land, it seems natural to be thinking of much- loved annual festive rituals, and The Nutcracker remains one of the “must-sees”. A unique production of this Tchaikovsky ballet by the Russian State Ballet of Astrakhan has been criss-crossing the UK this autumn visiting 27 towns in 37 days.

Thursday, November 21st was the turn of Dorking, a quiet market town in Surrey. The town’s cultural venue leaves much to be desired – originally built in the 1920s and updated somewhat in 1997 – the main hall is reminiscent of a school auditorium, although the raised bleachers give a good view to most of the audience.

Nonetheless, this beloved Russian ballet was performed to a packed audience, full of excited little girls, perhaps seeing their first proper ballet. The fact that the company’s 30-piece orchestra was there accompanying the dancers helped elevate the atmosphere to something special.

The enthusiastic appreciation from the audience proved that this production by the company from Astrakhan – a major Russian city located on the banks of the Volga river – provides delightful and entertaining family fare. Choreographed by artistic director Konstantin Uralsky, it moved at a steady pace, distinctly introducing the characters and offering a good standard of dancing from all the company members.

The activity never wavered and kept the audience’s attention. Because of the limited size of Dorking Hall’s stage – just one third that of the company’s stage back home – the sets and decorations had to be adjusted and cut by half – and there was still too little space for showy dancing or high jumps. But no one seemed to notice.

Uralsky comes from a Bolshoi background – he trained at the famous ballet school and danced for several years with the company before setting off for America in the ‘90s. On his return to Russia, he was invited to form this company in the spanking new building ordered by President Putin in celebration of Astrakhan’s 450th anniversary in 2011.

The company is very young with ages ranging from 18 to 30 and consists of 60 dancers. Forty-four of them came on this tour. The technique is secure, characterization is strong and, given the fact that the entourage had only arrived in Dorking at noon that day so stage facilities were unfamiliar to them, the dancers evidenced good training, (though I would have like to have seen less stylized poses and greater freedom and fluidity in the upper body and arms.)

The opening party scene in toned costumes with courtly old-fashioned mannerisms was low keyed, with the young girls dancing with their dolls and the boys brandishing their swords. Drosselmeyer’s appearance produced excitement as he magically balanced his walking stick on the floor (helped by a magnet on the floor), then made the children gasp by dropping dolls into a large box, only to see a full-size replicas emerge, ready to dance.

Marie, danced by Aigul Ishbulatova was dainty and childlike in her reactions. She has a graceful style, careful in her technique and not a risk taker, but perhaps this was due to the new stage. Her Nutcracker – a bit daunting at first viewing in the battle scene with a prosthetic Cheshire cat-like smile attached to his lower jaw – was danced by Igor Lihanov. He has a good jump and turns well and the pair were well matched in size and youthfulness and made a sweet couple.

And then there were the Mice – and my favourite moments in this production. In furry grey, they looked like offspring of Roland Rat with pointy faces and quivering head actions. The Mouse King (Alexej Ozimovski) was exceptionally tall, thus towering over the Nutcracker, and crossed the stage in a couple of leaps, scattering all and sundry. His weapon was a long-handled sink plunger, which occasionally suctioned onto the floor. However, the brightest spotlight fell on the smallest mouse which, clutching a huge chunk of cheese, padded around the stage with Pink Panther stealth. Laughter rippled through the audience at his antics and the dancer played to the gallery. The Mice return unexpectedly in Act 2, much to the delight of the onlookers, to frighten the Dolls and characters in the country of fairytales, as it is called in this production. Again it was the Nutcracker who chased them away and returned on stage carrying aloft the head of the Mouse King, a present for Marie, lucky girl!

The company showed off some of their soloists in this act, though, while tastefully done, much of the dancing possessed few ‘firework’ moments. The Spanish dance was neatly performed by Vera Kharchenko, whose smile lit up the stage. Her long-legged partner, Artem Pugachev, showed style but was hampered by lack of space. Uralsky has created an enchanting Oriental dance for three women, which demands much control and co-ordination and has Indian- and Balinese-influenced poses with slow movements and deep (non-wobbly) plies. The dancers here were Toma Okuno, Anastasiya Ignatova and Anna Nikonova.

The Chinese dance by Yuka Ishiguro and Genadii Mimrik was perky and bouncy, as was the Russian dance with Esmiralda Mamedova and Maksim Aslanov, and the Mirlatons, here called ‘French dance’, was performed with elegant style by Sofia Cherkasova and Olga Chetvertnih. The Waltz of the Flowers for the company was nicely choreographed but looked somewhat bland in the white dresses, and it was especially here that there was a need to see more flowing arms and bending upper bodies. At times, the dancers looked heavy rather than light and flowery.

Then came the famous pas de deux for the Sugar Plum Fairy and her Cavalier, Prince Koklush – the party piece for all Nutcrackers and one that should present tingling excitement as Tchaikovsky’s score swells with grandeur and enchantment. Sadly these qualities were not in abundance with the tall and slim Natalia Korobeinikova whose dancing was somewhat cold and mechanical rather than warm and regal. Her consort, Daniil Sokolov, was happier and showed some pleasing footwork and jumps, and proved a careful partner.

The scene ended and lights dimmed to rise once more on the Stahlbaum’s Christmas tree where young Marie clutched her Nutcracker doll and walked slowly to the front of stage as the curtains closed. The audience applauded loudly as the company took its bow before running off to pack up for their next stop in Yeovil. 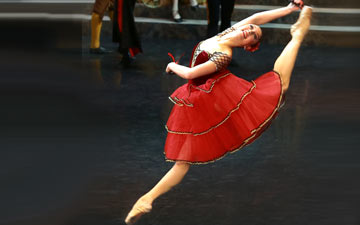 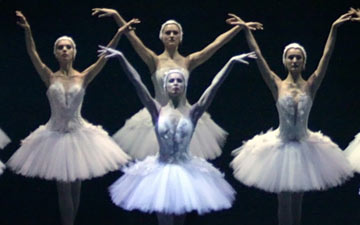 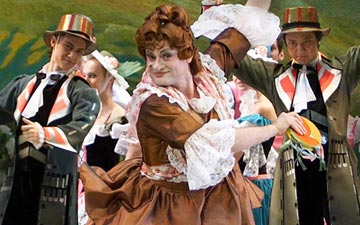