Giselle on the Screen

Of course there’s no better way to view a ballet performance than to be sitting in the theatre imbibing the live atmosphere both on stage and in the auditorium.

But not everyone can get, or afford, tickets for the Royal Opera House, and certainly not for a performance deemed as ‘hot’ as this one. Giselle, that beautiful Romantic era ballet has always been a favourite with the public, but with Carlos Acosta and Natalia Osipova in the leading roles, it was something that many dreamed of seeing, certainly after their first performance hit the headlines – and even the front pages of national newspapers. So, on Monday January 27th in over 1,100 cinemas and in 30 different counties around the world, the wonderful Royal Ballet production, staged by Peter Wright, became available to everyone.

It was a wet and windy night, but it was so much easier to walk the five minutes to my local cinema, than to be racing for trains and buses to make the 90 minute journey up to London – and back. At the Odeon in Esher, Surrey, crowds were already gathering when I arrived – more than I had experienced at any of the other ballet live screenings over the past year – and once inside Screen One – the cinema’s largest auditorium – it was obvious that the evening was a sell-out. However, checking back with the cinema manager the next day, I learned that most tickets had been bought before any reviews had come out, and because so many people turned up on the night hoping to see the show, he had opened another smaller screening room and that too filled up. Proof that ballet is alive in the suburbs!

While we waited for the performance to begin, an orchestral recording set the mood and gave an opportunity to hear Adam’s beautiful score without the distraction of any dancing. Later the cameras would go into the pit before the curtain was raised to watch the musicians work under the baton of Boris Gruzin. He kept them hard at work with a speedy and crisp pace.

Those around me also thoroughly enjoyed the short preview films – the first of which showed Osipova talking with authority and intelligence about her own interpretation of her role. The audience also marvelled at seeing her preparing and immersing herself as she rehearsed in a studio full of other dancers whose eyes followed her every move intently. For most of the cinema-goers it was the first time they had seen her at work, and her complete concentration and strong technique were impressive, and promised great things to come that evening. They also liked her naturalness after her deep concentration when, coming down from pointe early on her last step, she giggled and gave Carlos a winning smile  – which in turn, won her many fans.

Act one was a revelation! Never having the funds to sit in the front row of the Opera House auditorium, I thoroughly enjoyed the closeness and intimacy of being right up there with the dancers. Normally seeing the stage through binoculars or a wider view, it was great to note every nuance, and I really felt a part of the performance. It was obvious with this cast that they were not just dancing a role that they had polished in the studio. No, they became and lived their characters throughout – never losing their moods even when they were out of the spotlight. This was demonstrated especially by Osipova who smiled at ‘friends’, reached out and touched them in a girlish way, sat and watched with obvious enjoyment the Pas de Six (instead of scarpering off stage for a breather as happens with so many dancers) and she had an avid and excited observation of what was going on around her. She never let up for a second. Her performance was magnetizing, her jumps so high and soft and her death scene so powerful that she had us in tears. In Act 2, her movements were like thistledown, her balances and deep arabesques strong and steady. And those fleet multiple ronds de jambe which made tiny delicate but strong circles out to an extended foot, like ripples in a pond.  Acosta was a charming partner, a Count whose character changes from someone out for some fun in the woodlands, to a man who falls deeply in love and is torn apart by the havoc he then creates. His facial expressions up close  – as good as any Shakespearian actor – showed his every thought and his dancing was oh, so neat, clean and elegant. And, at the end of Act 2, more tears were shed – including from Natalia – at their final parting.

Wonderful as they were, this leading couple had a good team backing them. Thomas Whitehead produced a fine Hilarion, one you could feel sorry for when his anticipated happy life is turned upside down by the arrival of a bogus peasant at his true love’s cottage door. In Act 2 he showed some fine jumps when captured by the Wilis and forced to dance to his death. Deidre Chapman made a stern and concerned Berthe – did she perhaps hide a secret that Giselle was a love child from another illicit liaison with the castle on the hill and that is why she keeps shielding her daughter from Albrecht, casting scowls his way? We were able to see clearly from her reactions, Bathilde’s (Christina Arestis) absolute aversion to country life in all its ways, from the show of dead game, to the dusty bench she sits on, and to any contact made to her person – she pulled away from Giselle not wanting her to take her hand. Alas, Hikaru Kobayashi’s Myrthe in Act 2 was far too icy and lacking in expression for many, but the corps de ballet excelled itself in its uniformity, musicality and beauty.

While my Esher audience wiped tears from their eyes, the auditorium had remained mostly silent with no applause at all, which seemed so strange after such a performance. It was different elsewhere. In the Westfield Odeon there was ‘spontaneous clapping at the good bits – even though they (the dancers) couldn’t hear us!!  And everyone stayed to the end for all the curtain calls.’

Talking to cinema-goers after the film showed that it had been a huge success and words such as ‘wonderful’, ‘fantastic’, ‘incredible dancers’ etc were heard on the stairs down to the lobby. I talked to several people about their reactions and found very little criticisms of the production – just praise, especially for Osipova and Acosta. Here are a few:

‘It was an incredible opportunity to see such a world-class performance for the fraction of the price of a ROH ticket – and to be able to stroll to and from the local cinema was a bonus. (And also, not to have to get dressed up!).”

“Seeing it on a large screen had its pros and cons.  Pros:  the close ups of Natalia’s face which would only be visible using binoculars at the ROH.  She was extraordinary with her total immersion in the role.  But it also meant close ups of the sweat and heaving chests – the reality which is more hidden from the theatre audience.  And ballet is hard to follow on camera – there were moments when wide shots of the whole stage would have helped to give the feeling of the ballet’s atmosphere as a whole, rather than just following individuals/pairs.” (London-based business woman)

An experienced ballet dancer and teacher said he was delighted with Osipova’s emotions and expressions and her incredible technique in Act 1, but in Act 2, he felt ‘she threw her upper body back too much. She had madness rather than suffering love in her eyes and the close-up shots showed that she had her mouth open most of the time!”

Downsides:  From a London viewer: ‘It was bad sitting near a popcorn enthusiast who ate with mesmeric gusto through the loud bits AND the quiet bits. And as hard as I tried to focus on the screen, I have to say it did distract from some of the key bits of Act II. That wouldn’t happen in the ROH!”

There were pros and cons on Darcey Bussell’s participation as hostess of the evening. From an ex- BBC producer: “ It was nice to feel the ‘live’ element of the performance and that we in the cinema weren’t left out but felt included in the evening’s performance  – (it was interesting to see the tweets from all over!) And the films and the interview with Peter Wright and Kevin O Hare were good.  But Darcey needs more work on her live interviewing skills!  Clumsy use of cards/microphone in her interval interview, compared to her speaking with auto cue.  Undeniably she is lovely to look at and authentic in her experience – and her enthusiasm was nice, but she was a bit gushy at times.”

A lady from Hemel Hampstead said it was ‘breath-taking. Such a fabulous opportunity to be part of something that gave you the atmosphere and enjoyment of a superb performance in the ‘best seats’. And to have seen a favourite ballet with two such superstars was divine.“

This was echoed by a City banker who stated: ‘The ability to feel part of the evening, to sense the atmosphere in the auditorium and to have such clarity of interpretation made for a wonderful and memorable evening – despite being in a satellite location to the ROH. Osipova was stunning in her interpretation and the HD camera allowed each expression to be conveyed in full.  I imagine that the experience will be enhanced as the technology and technique of the broadcast develop, which will allow for a yet more polished and professional viewing. The audience participation through social media, specifically Twitter, added to the audiences’ ability to immerse and express itself on another level.  A wonderful, romantic rollercoaster that reduced some members of our audience to tears at the end of Act 1 – that in itself speaks volumes.”

And finally, the dancers at an adult ballet class in Richmond all agreed that it had been a spectacular event and that Osipova was the best Giselle they had ever seen. “It’s unbearable to think that, without the live screening, we would have missed it. We certainly felt we were right there in the Royal Opera House with the audience and dancers.’ It will be interesting to see how many people return to Esher on Sunday February 2nd to see the Bolshoi Ballet’s performance of Ratmansky’s Lost Illusions! 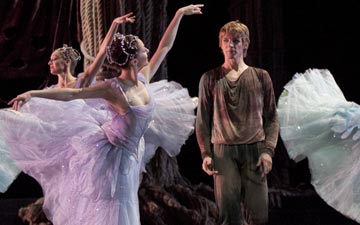 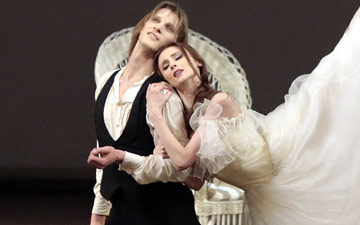 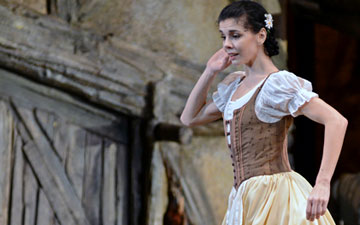