A Shaft of Light

Last year, in an interview following Dance Theatre of Harlem’s New York season, the company’s regal artistic director, Virginia Johnson, explained “I tell the dancers all the time, ‘you have to be a company of soloists, a musical note, a shaft of light.’” That the company exists at all after its financial implosion and nine-year hiatus is a kind of miracle. And at times during the company’s second season at the Rose, a spark did indeed glow from the stage. But the flame is still fragile and unsteady; it comes and it goes.

The task Johnson faces is complicated, full of potential pit-falls. In these early seasons she is working to define the company’s character, while helping the dancers to hone their classical training and shine as individuals. It would be a shame for them to be boxed in by an overly narrow notion of what a DTH dancer – a ballet dancer of color – should be. Programming is key. At the well-appointed Rose Theater (home of Jazz at Lincoln Center), DTH is performing two programs through the weekend. On program A, the classical Pas de Dix is followed by a new dance-theatre work, Past-Carry-Forward (by Tanya Wideman-Davis and Thaddeus Davis), and Robert Garland’s marvelous Gloria, from 2012. The second bill comprised another Garland work, New Bach (2001), Ulysses Dove’s Dancing on the Front Port of Heaven (1993), and Contested Space, by Donald Byrd (2012).

It’s smart of Johnson to push the dancers’ technique with a classical work like Pas de Dix. The ballet consists of a collection of solos and ensembles from Petipa’s Raymonda, a ballet first performed in the US by the Ballet Russe de Monte Carlo in the forties, in a staging by George Balanchine and Alexandra Danilova. So it’s Petipa by way of Balanchine. (The performance on April 23 was dedicated to the late Frederick Franklin, the former Ballet Russe star who staged Pas de Dix on this company in 1983.) There’s nowhere to hide in the choreography, which is both highly classical and tinged with “Slavic” touches (a hand behind the head, heel clicks in the air). At times it must be said the performance had the look of a test, one with mixed results. The recorded and over-loud accompaniment revealed a certain stiffness in the dancers’ musicality; it was correct, but clenched rather than free. And the ballet’s emphasis on unison and exactness revealed imprecisions in timing, sloppy footwork (particularly in the men), and inelegant transitions.

But there were lovely moments as well, particularly in the women’s solos, which unfurl vividly, like the fairy variations in Sleeping Beauty. The first, grand and showy, was danced with panache by Stephanie Rae Williams. In the more stately solo that followed, the Brazilian Nayara Lopes showed admirable control as she rolled down through her foot from pointe, one of the great tests of a dancer’s articulation. An in the role of the Hungarian seductress, tilting and floating backward as if under a conjurer’s spell, Chrystyn Fentroy was stylish and playful, though she could milk the exotique touches a bit more.

It also makes sense that Johnson would want to forge a repertory that is unique to the company, reflecting the background of its dancers. The resident choreographer, (and former DTH dancer), Robert Garland accomplishes this by creating works that combine classical technique with touches of vernacular dance. Some are more successful than others. Gloria, made in 2012 and set to Poulenc’s great choral work of the same name, is moving and musical and well made, a hymn to community spirit, to the dignity and transcendence of classical dance, and to the future. It begins and ends with children from the company school, who charm the audience with their beautifully pointed feet, fresh faces, and tightly-controlled exuberance. (Garland has said that the piece was inspired by his work with children.) The opening and closing are explosions of joy, in which toe-heel taps and shimmying shoulders feel organic, like part of a misa criolla. Several passages leave vivid after-images, as when Ashley Murphy hovers in profile, her strong feet shimmering like hummingbird wings. As she bends forward or arches toward the sky, she alternates between atonement and elation. Murphy is a marvel: she dances with crystalline clarity, managing to be both expressive and utterly elusive. She gives nothing away.

Garland’s New Bach (2001), on the second program, is less distinguished. For starters, it’s too indebted to Balanchine; at times it looks almost like a spoof of Concerto Barocco or Rubies. On top, Garland sprinkles a series of groovy moves: hip rolls, shoulder shakes, coy smiles. The whole thing comes across as more or less contrived. In contrast, Past-Carry-Forward, a new dance-theatre work inspired by the Great Migration – a demographic shift that saw thousands of southern blacks moving to northern cities in the early twentieth century – is surprisingly effective. You wouldn’t think dance could handle such broad historical themes, but the jazzy music by Willie “The Lion” Smith makes it all go down with ease. The ballet is like a musical without words. A young couple in ordinary street clothes sets off for the big city, where it is pulled into a decadent new scene full of vixens, victims, sin, jazz, liquor, and war. (Unfortunately, once they’re there, we lose track of the couple until the end, when they are reunited.) The dancers performed with conviction and grace; Fentroy, as the desperate floozy, was sensual, reckless and heartbreaking all at once. The work is evocative and heartfelt, marred only by the drawn-out, overly-symbolic ending, a kind of “ballet blanc” representing a harmonious future.

These are the better works. The more dubious excursions are the revival of Dove’s monotonous, jerky Dancing on the Front Porch of Heaven, from 1993, and Donald Byrd’s Contested Space. The first, set to moody Arvo Pärt – mostly descending scales accompanied by tolling bells – is ponderous and prayerful, filled with poses of anguish that leave little space for the dancers to color the movement. Contested Space, an exploration of male-female relationships set to pounding electronica, grows increasingly vulgar and violent as it goes along. The twisted, acrobatic partnering makes the women look like dolls, dominatrixes, soulless seductresses. The dancers pose and preen. Where is the light here? This second season reveals a company with much promise but still finding its way. 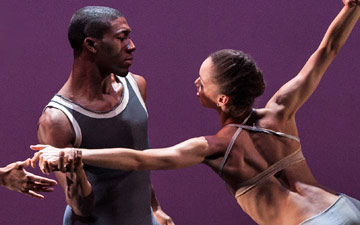 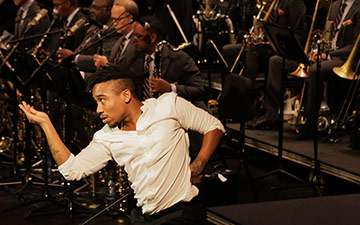