4D is part of Sadler’s Sampled season which brings a selection of cheap dance taster performances to London. Half the stalls seats are removed to provide standing room (a bargain at £8). The whole venue is buzzing with activity. The choreographer Sidi Larbi Cherkaoui, an Associate Artist of Sadler’s, is a popular visitor here, often working in collaboration with others (Akram Khan, Maria Pagès). Here he presents a kind of “greatest hits” programme: four duets from different past offerings, now reworked as free-standing pieces. It’s a showcase for his fluid, almost boneless style with the dancers winding their bodies around each other’s torso and flowing over and under each other. Four duets might sound a constricting formula, but there is a refreshing variety in the interactions of men and women. There is welcome oddball humour, too, for a woman determinedly treating her partner as quite literally part of the furniture – armchair, phone, the shower fitting underneath which she washes.

The opening duet is from Matter, which gives us the intriguingly-matched pair of Guro Nagelhus Schia and Kazutomi “Tsuki” Kozuki . She is tall and lanky, capable of tremendous control of those long legs. She stands there for what seems like minutes on one leg like a heron while almost absent-mindedly twining her arms and other leg through complex positions. He is a thin, compact, wiry figure, familiar from previous Cherkaoui productions, with a characteristic air of barely-restrained anger simmering under the surface. This certainly isn’t your typically yearning or erotic encounter. It’s not often in a dance performance you see a woman truly in charge of events. He becomes the things all around her, an armchair, the phone, a bathrobe. Simple projections on the screens behind the performers fill in the domestic detail. She doesn’t acknowledge him as a human presence at all. After she departs his anger bursts and he rants at audience in Japanese. The only word understandable is “shower” but the sense of outrage at it all is palpable.

Guro returns as part of the second piece (Pure), now clad in white. This has an entirely different and more troubled mood. Though the programme is billed as a series of duets, these dancers spend much of the time separate. Here, when they do come together, it is not for long. When left on her own, the woman begins to paint designs on her body and costume with black paint. Her partner returns and solicitously keeps trying to clean away the paint from her but can’t really succeed. She tries to daub him as well but he wipes it away. Although there are moments of nuzzling tenderness in the duet, there is something deeply unsettling and disturbing about the encounter, suggesting needs or desires that, despite all efforts, cannot be reconciled.

The first part concludes with a music video Valtari, with choreography from Cherkaoui, directed by Christian Larson to the music of Sigur Ros. This has a bleakly atmospheric setting in an abandoned, half-ruined factory. We see two dancers first from far off, gradually moving in closer to them as they approach each other. Most of the work is shot so that you can see the complete figure of the dancer clearly and register the full qualities of the movement through the entire body. It’s rather a shame that, towards the end of the piece as the pace picks up, the director decides that what is needed is lots of irritating rapid cuts, close-ups and snatches of slow motion. The focus and sense of flow are diminished as a result.

The second half gives us Faune as the closing item. This was previously commissioned by Sadler’s as part of its In the Spirit of Diaghilev bill in 2010. It took a revised look at L’apres midi d’un faune ballet and recast it in contemporary dance terms. It’s odd that this work, which had been created as a duet from the outset (rather than an adaption like the other pieces) is perhaps less successful than the other pieces. One reason might be that the use of the Debussy music sliced up with more modern interpolations is jarring: the other pieces have a much more organic relationship with their music. The title too imposes a burden of expectations. The woman suffers an unflattering costume. The Faune rolls his way about his woodland glade and has an ambiguous encounter with his partner but the outcome remains unclear.

Sin was more enticing. Here we have two dancers (Navala Chauhhari, Damien Fournier) costumed in black, in contrast to the couple in white from the first half. This is a slow, slithering intimate encounter, with bodies almost in darkness. The dancers don’t seem to partner each other so much as become a single conjoined entity.

Live music is supplied by six composer / musicians positioned at the back of the stage behind screens. All have a history of collaboration with Cherkaoui. They are a mix of nationalities and influences, with Indian melodies prominent. They project a strong sense of common purpose. Cherkaoui has found the right collaborators here, just as he has with his dancers. It’s a very satisfying package of liquid, sinuous movement delivered by idiosyncratic and characterful performers.

Sampled continues with Playlist this weekend, a taster programme including everything from hip hop to tango to ballet. It’s a good and cheap way to explore different dance options and decide what might take your fancy for the future. 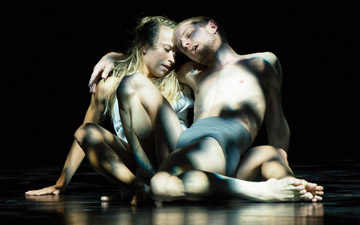 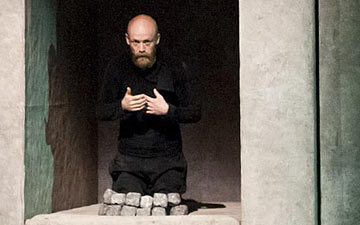 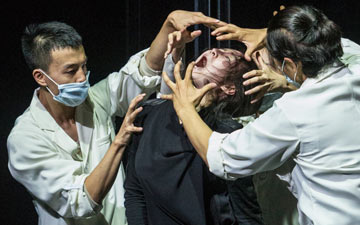