We all like Carlos Acosta, the original boy without shoes who made good in the performing high arts and is celebrated the world over. There seems no clever or flashy side to Acosta: he works incredibly hard, does his absolute best in projects he believes in and he hopes you like it. It seems everybody is behind him and if sometimes things don’t work so well then one tends to think, “Well we all have less good days” rather than reach for the invective. He’s been curating his own Cuban-focused shows for over a decade now and Cubania mixes his well-known Tocororo (reworked again) with some more modern works by Cuban and non-Cuban choreographers, all bar one of which have been seen before. Overall there are lots of great dancers on stage, but it can feel a patchy show and Acosta’s own contribution is not always the most memorable. But as he winds down, it’s inevitable he does less and he showcases interesting younger bodies.

Before the single interval comes the choreographers’ section with 4 diverse pieces. Most memorable was Russell Maliphant’s Flux for the dancer Alexander Varona – everything about it is hypnotic and repetitive from the initially sparse electronic beat to Varona’s ever-turning and rolling body, accentuated by his long limbs and steady control. A smooth and transfixing 10 minutes. I also rather liked George Cespedes Ecuacion (I think it used to be called La Ecuacion), by four Danza Contemporánea de Cuba dancers. The action surrounds a 10 ft skeletal cube: the dancers enter one by one, noodle a little in dull red light, before exiting and the next repeating. The work steadily opens up in intensity until eventually the four occupy the complete stage, brightly lit, powerfully supporting and interacting with one another to what has become another hypnotic soundtrack. More conventional is Edwaard Liang’s Sight Unseen for Carlos Acosta and Zenaida Yanowsky, backed at first by the 24-strong Pegasus Choir with a Georgian chant. After standing off, Acosta and Yanowsky get to grips in a pas de deux and you can almost feel the audience let out a sigh as familiar territory is found at last and it is looking good. It doesn’t matter that we don’t know the context or that Yanowsky is saddled with the worst costume (leotard plus odd bits of rectangular cloth, front and rear) that you have ever seen.

Understanding what is is going on is no problem in the sole new piece of the evening, Miguel Altunaga’s Derrumbe, for Acosta and the wonderfully communicative Pieter Symonds. It really seemed to be the Kenneth MacMillan memorial part of the evening as a couple combatively work through their relationship issues, often using clothes as a metaphor for the baggage and emotions of life. There are endless changes of jackets, some of which mysteriously fall from the gods. All these changes were cheaply distracting and interfered with what should have been the flow of dance. Altunaga is a powerful dancer in his own right (with Rambert) and nice of Acosta to back a fellow Cuban, but he really needed a stronger choreographic introduction to the night.

After the interval it’s Tocororo Suite, Acosta’s tale of a boy who becomes a man through ballet and taking on Mr Cool (Alexander Varona vamping it up beautifully), leader of the gang, in a ballet-versus-dance battle. Along the way Acosta finds love (Veronica Corveas – excellent), wins the big battle (only just – that age thing again), but no hard feelings, everybody is happy and end up swigging beer as the curtain comes down and Acosta has a twinkle in his eye, as if to say “This is Cuba and dance – welcome to my world”. It’s all very slight as stories go and could do with some further shortening really. Nice to have a band on stage but musically Tocororo struggles to support the story parts of the action save when the 12 Danza Contemporánea de Cuba dancers are on stage whipping up a party/storm. They really do waft you along to a different country in a way no conventional ballet or dance company can. In terms of dancing Cubans they collectively are the best on the night. It’s not a perfect show by any means, but come the end you still love Acosta, his spirit and his smile. He remains a potent name, doing potent things for ballet, like filling the ROH and showing people a wide variety of dance styles they’d be unlikely to see otherwise and might well enjoy. Good man. 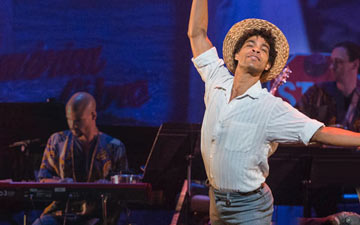 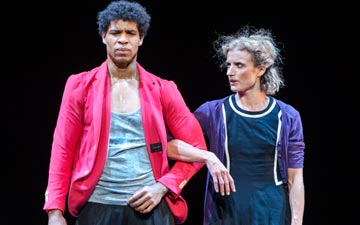 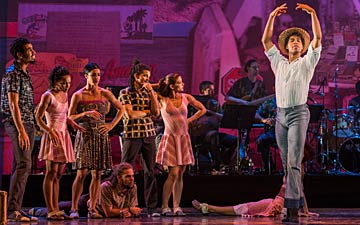