Paul White won the 2013 Critics’ Circle Dance award for outstanding performance in a modern work with a solo performance set to the Rite of Spring. He now dances with the Pina Bausch company, but is back here with another solo. This too starts from a famous Diaghilev-era work, L’apres midi d’un faune, which celebrated its hundredth anniversary in 2012, which is when this new-to-London piece was crafted. Anatomy of an Afternoon, created with Australian choreographer Martin del Amo, revisits the idea of a faune and the potential of a languid afternoon but radically transforms it into a longer exploration of our animal self.

Debussy is out. The music here is from Mark Bradshaw, and is delivered live on stage by three musicians. It has a shimmering heat haze quality. It hangs in the air rather than generating an onward pulse, but provides a convincing drowsy evocation of a warm lazy afternoon. A sounding bowl gives an eerie, otherworldly reverberation.

Martin del Amo and Paul White visited the zoo as part of the process of creating the piece.  The results are evident in White’s movement, but they evoke rather than directly imitate. He could be some large carnivore. When he drops his head and narrows his eyes it suggests a big cat that has suddenly got a sniff of potential prey. His movement is initially very slow and measured: a twist of the shoulders, a tilt of the hips, a stretch of the arms. It could be a well-fed animal drowsing away, digesting lunch.

We progress to wilder and more energetic movement as the dancer sheds his clothes.  Traversing the stage, pacing and running back and forth, he could be a caged creature, raging back and forth. He grips the very edge of the stage with his toes and scans the front row as if assessing whether someone out there might form an acceptable snack.  He even licks his hands.  This creature knows he is being watched.

There’s a remarkable mix of control and abandon in the movement.  White is required to balance (in one example, on his head) and slowly move from one position to another, where nothing is rushed and every little movement of an arm or a foot is perfectly assured.  But he can swiftly change from this to suddenly hurling himself through space, rolling or slithering along the floor, and then back again to stillness and repose.

It’s a really demanding work, and the intimate setting of the Purcell Room brings you up close to every drop of sweat.  White never loses focus in the fifty minutes, and he commands our attention consistently in a charismatic and compelling performance. 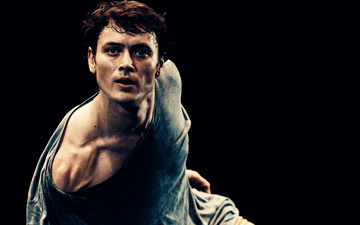