Windows in Progress, by choreographer Luca Silvestrini, is part of Deloitte Ignite 2014, The Royal Opera House’s annual contemporary arts festival which runs from 5 – 28 September, this year based on the theme of myth.

“Luca Silvestrini is the sharpest of comic choreographers” is the Guardian-quoted strapline on the Protein Dance website – a succinct summary of what he and they are about. This year Silvestrini’s Protein is part of the Deloitte Ignite contemporary arts festival at the Royal Opera House, except they are not performing in the ROH – good time for a chat…

How did you come to be part of this year’s Deloitte Ignite with its emphasis on myth and creation?

Over the years I have created a number of popular outdoor interventions that have managed to entertain and surprise audiences. I guess this is the reason why ROH have asked me to animate the Piazza’s entrance this year as a way of introducing passers-by to the building and the indoor activities of the Festival. I could not have said no to the offer as I particularly love making work for specific locations where the connection between performers and audience is a sublime act of spontaneity full of interesting surprises.

What are Protein going to be doing in the Covent Garden piazza?

I’ve been specifically commissioned to animate the shop windows in the colonnade and what the dancers and I have created is a promenade performance that will move the crowd from shop to shop and into the ROH building. My response to this year’s emphasis on myth and creation resulted in imagining a scenario called Windows in Progress, inhabited by 4 ambitious Covent Garden window dressers: Pandora, Leda, Prometheus and Zeus. They are a sort of reincarnation of these mythological figures and their daily window-dressing business gets caught up with their ancient stories of creation, salvation and punishment.

What so attracts you to dance that shows the funny side of the everyday?

The everyday is such a rich source of inspiration, but it’s not the funny side of it that attracts me. I am attracted by the complexity of the stories, situations and feelings we live in and are part of. I do not know exactly why, but it comes naturally to me to rewrite and stage them with a humorous, ironic and often satirical approach. I find that lightness is often an incredible tool to reflect upon all life’s events, especially the tragic ones or those we find uncomfortable to recognise and deal with.

We’re looking forward to Deloitte Ignite but what other projects have you got coming up?

During the first weekend of Deloitte Ignite, Protein will also be performing (In)visible Dancing, another outdoor performance, in Italy. Later in the Autumn I’ll be travelling to Japan where I’ve been invited to run workshops and spend some research time towards a future project there. After that I’ll be focusing on Protein’s new touring creation for ’15/’16, a collaboration with composer Orlando Gough.

Generally, to see the dance sector performing and continuing to grow so well. Specifically, to further develop my interest in creating and delivering dance experiences that can both provoke and entertain audiences, in or outside theatres, whilst bringing dance closer and closer to those who think that they do not and/or cannot understand it. 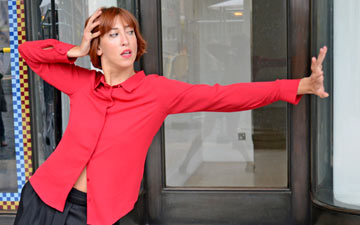