The Cellist, for The Royal Ballet

has its premiere on 17 February 2020. Full Details

JP: The Cellist is about Jacqueline du Pré – is it biographical?

CM: It’s called The Cellist – a deliberate step back. It’s not about Jacqueline du Pré’s private life: I didn’t want to go there. What I wanted to focus on was the relationship between Jackie and her cello, so it’s a love story of love and loss between her and her object – her instrument, her voice, her identity, in a way. She’s a young girl who finds her talent, falls in love through that talent then loses it. I look at the impact that has on her and the people around her – her husband Daniel Barenboim, her mother, her sister Hilary – as well as her instrument.

How do you show the effect on her cello?

I’m imagining how an inanimate object can hold emotion – something that feels and gives love. A cello is close to being human in terms of its shape and its sound. It’s her friend and companion, with her most of the time. She travels with it, buys it an airplane seat next to her. There’s no actual cello on stage – it’s a person: Marcelino Sambé or Calvin Richardson.

I got the idea when I was making Dangerous Liaisons for the Royal Danish ballet, when the character Cécile is having music lessons. I didn’t want to use a prop, so I asked one of the dancers to become a cello and he did. It was very clear for a brief sequence. So I thought I could make a Cello Ballet, a creation that wasn’t primarily about a love affair between a man and a woman. My sister suggested Jacqueline du Pré. (Our mother has MS – multiple sclerosis, like Jackie – but that’s not the reason why I made the ballet.)

So how does a human cello work?

The dancer is the instrument, and music personified, and to some extent fate. He is timeless, antique, so he guides the young girl. He’s the musical force that brings Jackie and Daniel Barenboim together. He knows what love is because he’s experienced it before, with other musicians, and he knows she is special.

And the music – do you use her recordings?

No, though it was important to have some of her repertoire in the ballet in a recognisable form, not in coded quotations. So I asked Philip Feeney (with whom I’d done Jane Eyre) to include some of her pieces in a new score. But what to do about the Elgar cello concerto, so redolent of her? We’d finished the score last summer, excluding the Elgar, but I changed my mind. My gut instinct was to have it there, with Barenboim conducting her – which he didn’t, but he gave me his agreement. Philip generously agreed to rewrite, so we pushed back the deadline.

I spoke to people with the experience of having MS, including my mother, and one of the things I gleaned is the awfulness of not knowing what is going wrong with your body before the diagnosis. The pressure on Jackie was huge and at one point she broke down and took herself back to her family as refuge. I don’t go into her private life, except to show how she had to face a cycle of doctors as her symptoms came and went The corps express what she is experiencing physically through dance motifs. I chose not to bring a wheelchair onto the stage but to have her carried instead as she remembers her youth – and her cello.

What can you say about the designs?

The set designer is Hildegard Bechtler, who found photos of the inside of a cello, which clicked for both of us. I wanted a set that’s not realistic but offers suggestions of concert halls, open spaces, an echo chamber evocative of memory. Its curves are very feminine. The costumes are by Bregje van Balen, a former dancer with Nederlands Dans Theater, who knows what works for choreography without drawing attention to the costumes themselves.

Did you have a dramaturg for The Cellist, as you do for most of your creations?

Yes, Edward Kemp, with whom I’ve worked at least a dozen times. [He is the Director of the Royal Academy of Dramatic Art (RADA), a writer, director and translator, as well as dramaturg.]

Everybody has different views about Jacqueline du Pré and I’m sure there’ll be mixed feelings about how we portray her. The ballet is intended to be celebratory, even though it’s a tragic story. She goes on to inspire people, to glow in people’s memories through her recordings and the documentaries about her.

Edward Kemp has been working with you on your next commission from San Francisco Ballet, which has its premiere on 24 March, soon after The Cellist for the Royal Ballet.

I made the ballet, Mrs. Robinson, quite a while ago, but clearing the rights has been complicated. It’s my take on Mrs Robinson, the older woman in The Graduate film and the novel on which it’s based. The author, Charles Webb, sold the rights, including the use of future characters, to a film company that was then bought by another, so it’s been tricky. I saw a copy of his novel by chance when I was in a bookshop in Leeds, creating Victoria for Northern Ballet in 2018. I realised he’d written it in San Francisco, so I immediately knew it should be my second San Francisco Ballet commission. [Her first was Snowblind, premiered in 2018.]

I was drawn to her because she’s become an archetype of the sophisticated older woman who seduces a young man, even for people who have never seen the film or read the book. I wanted to portray her point of view, why she does what she does, and to give her an alternate ending. Is she going to become a lonely alcoholic, divroced by her husband? I discovered that Betty Freidan’s book, The Feminine Mystique, which was one of the major triggers of a second wave of feminism in the US, was written in same year, 1963, as Charles Webb’s novel. It was serialised in a women’s magazine, so how wonderful if Mrs Robinson could have been inspired to leave her husband and reclaim her own name, swept up in a wave of women breaking away from tradition. But I want the ballet, like the film, to end ambiguously, so the audience can make up their own minds about her destiny.

What about the music and the song, Mrs Robinson, written for the film by Simon and Garfunkel?

It’s a totally new score by Terry Davies, who often works with Matt Bourne. Terry is the right composer to hint at the period in the US, the 1950s-60s. He uses the saxophone as Mrs Robinson’s voice, and the guitar for the younger counterculture. The designs are by Patrick Kinmonth, who did Jane Eyre with me.

You’ve frequently picked literary works as the subjects of your ballets. Do you expect audiences to know the original sources, or do you provide detailed scenarios?

I try to make pieces where someone can take away what they make of it. On the other hand, I like to make a piece that if you know some of the background, you might get a deeper understanding of what is going on. You’d get more from it the more you see the work, though I don’t expect everyone to go multiple times. I prefer to give a short scenario, though some companies like a fuller account, if their programmes can accommodate it. I’ve made some pieces about real-life people, which take a lot more research: Clara Schumann, Anna Goeldi in Witch-hunt, Queen Victoria and now Jacqueline du Pré.

Why do you think American audiences and critics react so differently to your ballets? Jane Eyre in particular, in American Ballet Theatre’s rep?

The New York Times critic [Gia Kourlas] was very hostile to Jane Eyre, so I preferred not to read her review when I was told about it, but audiences stood up every night. In Chicago, the critics and audiences were excellent. I think ABT audiences at the Met have got used to Alexei Ratmansky’s bright ballets, with lots of steps to display the dancers’ skills. Those audiences would rather see his Whipped Cream and Harlequinade than Jane Eyre, which is about the characters and story. American critics don’t know where to place me: they always ask where’s my lineage? Ashton, MacMillan, Pina Bausch, Mats Ek? I don’t have those influences in my body as I didn’t actually dance their works. I’m as influenced by theatre and literature as much – or perhaps more – as other choreographers.

Quite a few American companies do want to do my work, if I can’t yet give you details on the record! But it’s announced already that the National Ballet of Canada will share Victoria with Northern Ballet as a co-production in 2021.

Tell us how you work with Jenny Tattersall as your assistant

Her role differs according to the company. Northern Ballet gives me two studios and plenty of time to create and rehearse. With San Francisco Ballet, we can use parallel studios: I have the master plan and list of words to inform and inspire the dancers. Jenny and they prepare the basic dance vocabulary between them and then come back to me. I’ll play with what they’ve done and structure each scene, adapting their ideas to fit my narrative scheme. So Jenny’s role is far more than a coach. For SFB, we’ve changed her title to choreographic collaborator. However, in the Royal Opera House, we can use only one studio, because the ballet company is doing so many things at the same time, so her role has been more limited. 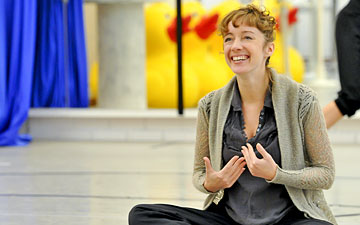