For over a decade, the puppeteer Basil Twist has been expanding our definition of puppetry. He has concocted drama out of Japanese screens, bubbles, simple stick figures, refracted light and bathroom pipes. Increasingly, he has been drawn to the rich textures of classical music, particularly of the French and Russian schools. His most famous work so far was an underwater fantasy set to Berlioz’s Symphonie Fantastique, which premièred in 1998 at HERE Arts Center and went on to be shown at many festivals.

Ballet music, with its underlying narrative, is a natural match for Twist’s increasingly abstract approach. The story is already in the music, which gives him more freedom to do what he likes onstage. Sometimes, as in his deeply affecting “Petrouchka” (2001), he makes direct reference to the content of original. But in the new Rite of Spring, which is having its New York première as part of the White Light Festival at Lincoln Center, he takes a much freer approach. And bolder – in fact, he does away with one of puppetry’s main features, its reduced scale. Here, the puppet theatre includes the entire proscenium stage and his dancing abstractions dwarf the puppeteers. It’s puppetry as dream-scape.

The evening consists of three works, all by Stravinsky, marvelously played by the Orchestra of St. Luke’s: Fireworks, Pulcinella Suite and The Rite of Spring. (It amounts to a Diaghilev tribute of sorts: all three works were performed by the Ballets Russes.) Rite, played in a reduced version by Jonathan McPhee, is especially pleasing to the ear. The sound is lean and refined, with moments of chamber-music-like intimacy. For once, one can clearly hear the entry of each individual voice through the texture of the orchestra. Instead of clobbering you over the head, it invites you to listen and marvel at Stravinsky’s construction, the layering and contrasting of melodies and rhythms.

In the first two pieces the pleasures are mainly musical. In response to the festive brass fanfares of Fireworks, Twist deploys a cluster of origami-like shapes. (We’re not too far from the world of Mummenschanz here.) The towers and pyramids tremble and tilt – manipulated by invisible handlers – and reveal hidden sources of light, but they barely hint at the explosive energy of the score. The visual accompaniment to Pulcinella Suite is more ingenious, but again, undercuts the complexity and lyricism of the music. Pulcinella, Stravinsky’s setting of eighteenth-century music by Giambattista Pergolesi and others, is an achingly lovely piece, sprinkled with haunting dissonances and strange, scratchy textures. In response, Twist creates a ballet for white tubes, assembled and disassembled by his masked puppeteers into flowers and stars, a galloping horse, and in a coup de théâtre, into a man and a woman who bow and curtsey and – almost – dance. It’s lovely, but there’s so much more to the music than this.

But the vague sense of disappointment disappears as soon as Rite begins. As in his 2004 Dogugaeshi – inspired by a nineteenth century Japanese puppet tradition – the drama, at first, is propelled by the rapid juxtaposition of multiple screens. But here, instead of dazzling us with colored patterns, Twist capitalizes on the effect of light on silk. He mesmerizes us with ripples, waves, twists, flutters. Like water or fire, the silken folds are infinitely varied. Later, waves of fabric are manipulated with invisible sticks, à la Loie Fuller, an early experimenter with illusionism in dance. The stage becomes a Revolutionary battle-field, traversed by soldiers hoisting standards. Then, to a funereal dirge, an enormous beam tilts slowly, like a left-over girder from the Industrial Revolution or an errant scaffold, who knows. Smoke billows, fire-flies play, masked figures climb out of piles of detritus like rats.

After a long – too long and too noisy – pause, the curtain opens once again on a surreal scene out of Magritte, a primordial mist-filled swamp under a constellation of planets made out of what looks like crumpled paper. A figure (Christopher Williams) appears, almost naked, and begins a frenzied dance, the ritual sacrifice. This is Twist’s first direct visual reference to the original libretto. The dancer’s movements – bigger and bigger jumps, twists from the waist – seem imposed on him by an external force. With his stiff, almost wooden arms, Williams is more puppet than man, more Petrouchka than flesh-and-blood sacrificial maiden.

The final dance is Twist’s latest angle on the magic of puppetry, that strange alchemy that can, in the right hands, render inanimate objects more moving than bodies of flesh and blood. With the help of the music, Twist gives these objects a soul. More importantly, his almost-abstract visualization of Stravinsky’s most famous score frees it from a series of accrued clichés and allows it to surprise us once again. 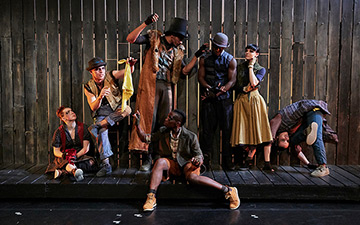