The history of Chinese modern dance is relatively short, and, until recently, development of modern dance has been sluggish in a country where the arts are expected to promote the interests and ideologies of the state. For most of the 20th century, China supported and encouraged the development of classical ballet (a cultural import from Russia) and national folk dance. The first Chinese professional modern dance group, the Guangdong Modern Dance Company, was only formed in 1992. (A winner of a MacArthur “genius” grant, choreographer Shen Wei, is the troupe’s founding member and its most famous alumnus.)

In 2003, the Chinese government introduced a new policy to gradually reduce direct financing to arts organizations, allowing them to become independent; and by doing so opened the door for the formation of new privately-run modern dance groups. The Beijing Dance Theater is one of them. The troupe was founded in 2008 by choreographer Wang Yuanyuan together with visual artists Tan Shaoyuan and Han Jiang, and has already established a prominent presence on the contemporary dance stage of China.

The Beijing Dance Theater (BDT) is a group of 16 young, dedicated dancers, equally versatile in classical ballet and the contemporary dance lexicon. They are no strangers to Washington, D.C. The troupe had its Kennedy Center debut in 2011, performing Haze, an evening-long dance inspired by the literary output of Chinese author Lu Xun (1881-1936) and created by the company’s artistic director and choreographer, Wang Yuanyuan.

Wang’s new work, Wild Grass, which BDT unveiled at the Kennedy Center’s Terrace Theater in October, is another foray into the literary heritage of Lu Xun, namely his collection of meditative prose poetry Yecao (野草, Wild Grass, or Weeds), first published in China in 1927. In this three-act, 90-minute-long piece, Wang explored in movement the hidden meaning and symbolism of Lu Xun’s abstract, stark verses, creating a showcase for the company’s collective dance power.

The first part – Dead Fire – was a visual reflection of the frozen, desolate landscapes painted by Lu Xun: “I dream that I am racing on ice mountains… At the top of the mountains grow icy trees, whose leaves resemble pine needles. All cold. All pale. This is Dead Fire. It has burning form but no flickering. It stands frozen like corals…” The metaphorical imagery of Lu Xun’s poetry was aptly emphasized by the haunting scenery and lighting design of Han Jiang. The stage backdrop evocatively suggested a dreamy full moon and misty mountaintops capped with ice and snow. The floor was covered with ashen leaves, which swirled and spun in midair with each movement of the performers onstage.

The dancers, dressed in light beige, were scattered onstage like flowing snowflakes, their movements measured and languid. They stepped onto the ground softly and quietly, surrounded by a wintry landscape with falling snow. Wang borrowed mainly from the contemporary dance vocabulary, spicing it up with balletic movements. But her choreographic range was limited and, as the piece went on, the action onstage, at first compelling, felt repetitive and unfocused. The monotonous piano music (played as a heavily amplified record) – a one-note staccato drone – didn’t help to sustain interest.

The second act – Farewell, Shadows – brought a change of pace, yet the atmosphere remained dark. “I am but a shadow, about to depart and sink into darkness. But darkness will swallow me, even as light will vanish me,” wrote Lu Xun in the poem which inspired this movement; and in response to his bleak imagery, the creators colored the stage in somber hues. The cast was clad in black sporty-looking costumes, the lighting was dim and the techno soundtrack evoked the droning hum of an underground dance club. Here, just like in the opening scene, the choreography revolved around a few core steps, and most of the time the dynamic cast resembled an anonymous crew of well-rehearsed back-up dancers.

The final movement – Dance of Extremity – was dominated by the theme of death. The music – a lament for violin and cello – filled the theater with a piercing, melancholy sound. The images of motionless people lying on the floor or being dragged off the stage appeared over and over again. Obviously, these scenes were supposed to give us chills. The dancers’ dedication and sense of purpose were genuine and consistently present; but I wasn’t moved. With no narrative clarity or emotional content, the finale felt dramatically artificial and hollow. 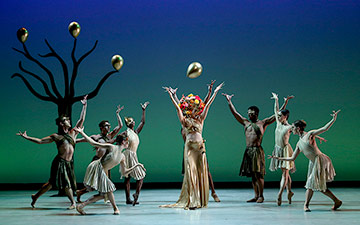 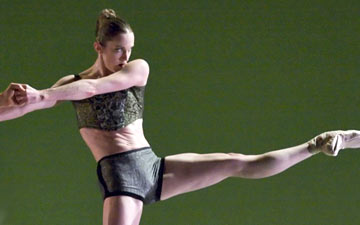 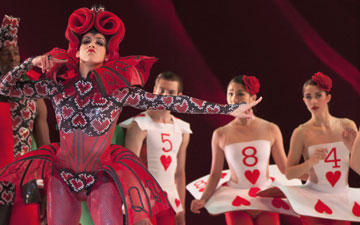