The Washington Ballet opened its season with a program of new works created specifically for the company. All three ballets – Jessica Lang’s romantic Reverence, Annabelle Lopez Ochoa’s enigmatic Delusional Beauty and John Heginbotham’s propulsive Racecar – had a strong visual appeal and plenty of winning ideas; the shortcomings notwithstanding, each piece was immensely watchable and memorable in its own unique way.

Jessica Lang was an up-and-coming choreographer when she was commissioned to create a work for the Washington Ballet in 2006. Titled Stearc, this short and quirky piece featured a trio of dancers and a trio of chairs and was accompanied by the music of Béla Bartók. It was performed as part of the company’s popular 7×7 series, namely 7×7: Women, with all seven pieces on the program being created by female choreographers. Kudos goes to the Washington Ballet for giving center stage to women dance-makers back then and during all these years.

Today Lang is a prominent name in the world of ballet, having created more than 100 works for major companies around the world, including the American Ballet Theatre, Alvin Ailey American Dance Theater, Pacific Northwest Ballet, Joffrey Ballet, Birmingham Royal Ballet and the National Ballet of Japan, among many others.

In her new work for the Washington Ballet, Reverence, Lang showcased her penchant for a visually strong (“sculpted”) image and a fluid classical vocabulary. Following closely the pensive mood of Robert Schumann’s Symphonic Studies to which the ballet is set, she conjured a dreamy romantic world and populated it with four couples.

Reverence unfolds with an appealing cinematic fluidity and aptly combines the elements of stillness (the ensemble formations are particularly impressive here) with a languid flow of movement. A circle is a main leitmotif of the choreography’s architectural geometry; and the dancers’ interplay often evokes a gathering of close friends as they float across the stage amid a cornucopia of sensuous lifts, holds and turns.

“Reverence is my definition of ballet,” wrote Lang in the program notes, “and it was created with the intention that it be experienced, not explained.”  Indeed, throughout the dance, the choreographer offered a visually satisfying experience of classical idiom. Yet a procession of beautifully sculpted groupings and poses wasn’t enough to give the ballet a sense of depth. I felt that the piece as a whole, despite its striking choreographic imagery, lacked a sense of direction and its emotional layer, alas, was missing.

Choreographer Annabelle Lopez Ochoa is no stranger to the Washington Ballet either. In 2014, she created PRISM – a 30-minute long ballet set to the shimmering improvisations of Keith Jarrett’s Köln Concert. Performed as part of company’s Jazz/Blues Project, the ballet turned out to be an instant hit with the Washington audience.

For her new work, Delusional Beauty, the choreographer drew her ideas and inspirations from the surrealistic painting of Salvador Dali titled Femme à la tête de fleurs (Woman with a Head of Flowers). So it’s no surprise that the entire piece proved a visual feast of the eyes. The gorgeous stage decorations, the costume design and the props all contributed to the undeniable allure of this Beauty.

In the course of the dance, the stage was dominated by a sprawling tree decorated with what seemed like three golden fruits. A mysterious woman with nails as sharp as knives – the Golden Figure – glided around the stage in a sinuous manner, seemingly lost in her own world. Dressed in a backless gold gown, her head decorated with a crown adorned with flowers, this diva alone could have been a focal point of the entire work. Yet, there was also an ensemble of nine dancers (five women and four men) with a mission of their own, zipping and zooming onstage in a whirl of relentless movement yet never establishing meaningful connections with each other and, strangely, totally oblivious to the Golden Figure, who, as the ballet progressed, looked more and more not so much enigmatic as displaced. That sense of ambiguity and disconnection permeated the choreography from start to finish: I felt like I was watching two separate ballets at the same time.

Drawing its pulse and energy from the buoyant percussive score (expertly performed lived onstage by the four-member group called “So Percussion”), John Heginbotham’s Racecar concluded the program on a high note. There was a good deal of wit and humor in this ballet as well as a kaleidoscopic variety of shifting patterns with loads of intricate footwork for the ensemble of 16 dancers. Athleticism, speed and spontaneity were abundantly on display here; and the whole piece percolated with excitement and youthful zest. Dressed in simple but stylish costumes (women in red point shoes evoked a fearless squad from Twyla Tharp’s legendary In the Upper Room), the Washington Ballet’s cast enjoyed every moment of this exhilarating race, dancing with precision and a wonderful impetus. The superb Sona Kharatian, who celebrates her 20th anniversary with the company this season, and Tamás Krizsa made a fine impression in an evanescent pas de deux, which served as a brief moment of respite from the ballet’s incessant, fast-paced, momentum. 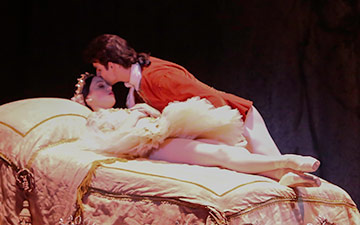