It is always interesting to see what happens when a dancer who is also a choreographer plans his or her own retirement performance. A few weeks ago Lauren Lovette bade farewell from New York City Ballet with a final Serenade, asking that it be placed at the end of the program. That final image, of Lovette departing on the shoulders of her fellow dancers, moving toward the light, was both effective and moving. A perfect metaphor for the transition from the past into the future.

On Dec. 9, it was Jamar Roberts of Alvin Ailey American Dance Theater who was saying goodbye to his dancing career, though he will stay on as choreographer-in-residence. Robert Battle, Ailey’s artistic director, was smart to bind Roberts to the institution; Roberts has proven himself to be a choreographer of substance who creates works that channel deep emotion without foregoing complexity and the power of beauty.

The choices Roberts made for his final show were, unsurprisingly, apt. The program began with a solo for himself, You Are the Golden Hour that Would Evanesce, created for the occasion. Then, after performances of his new work Holding Space and Robert Battle’s For Four, he returned for one last Revelations. How fitting it was. This dance, still the company’s greatest work, as well as its bread and butter, is performed night after night, year after year. For an Ailey dancer, it must become almost rote. And there he was, standing tall as a tree – Roberts is six foot four – in the opening section, rooting the ensemble with his powerful arms and legs, gazing upward into the light. His place will be difficult to fill, and yet, this is what happens with great works of art, and great companies; the dancer goes, the work remains. By joining the cast of Revelations one last time Roberts was acknowledging this, with grace and humility.

Leave-taking was also the theme of Roberts’s opening solo, whose title, too, captures the sense of time suspended just before the end of something. The music was a gentle work for jazz piano, “Only the Shadow Knows (Honey),” written and played onstage by the jazz composer Jason Moran. To its arpeggiated opening, Roberts walked on slowly, then turned toward the audience. On a series of rising notes, he touched his knee, hip, heart, shoulder and face, then opened his arms wide in a gesture of simplicity and thanks. The rest of the solo seemed to track a series of through-the body impulses; he both responded to the music and held it close, listening, breathing it in. It was an act of presence and reflection, the stillness before the absence.

Nothing quite compared to that moment, until that closing Revelations. Holding Space, which Roberts created during the dark days of the pandemic, is a chilly work, bathed in gray, driven by a loud, industrial soundscape by Tim Hecker. There is no physical contact – as per Covid protocol – nor are there real highs or lows. The dancers, in unisex translucent costumes, move at first in jerky unison and then subdivide into smaller sections, and eventually, into solos, each expressing a different state of mind. The others watch. At the end, it just fades away. The piece lacks Roberts’s usual sense of poetry, of human grandeur. It feels like a pandemic piece – a little grim.

A second viewing of Robert Battle’s For Four doesn’t reveal much more than the first. Set to fast, slick Wynton Marsalis (“Delfeayo’s Dilemma”) it is virtuosic and polished – but more manic than high-spirited. The four dancers smile and shimmy and point their fingers, entering and exiting the stage at warp speed. A gesture of protest – a raised fist – at the end, and a quick projection of the American flag, don’t coalesce into a larger message. For Four feels like a party piece, an opportunity to show off the dancers’ brilliant technique. In this it succeeds.

Revelations brought down the house, as usual. Like Paul Taylor’s Esplanade, and George Balanchine’s Concerto Barocco, it is a perfect dance. In this performance, the duet “Fix Me, Jesus” was performed by Sarah Daley-Perdomo and Yannick Lebrun, both of whom imbued the steps with classicism, understatement, and a kind of sacred quietude. Their performance was all the more powerful for being so internal. And then, in the final section, Jamar Roberts returned, sharing a glance of recognition with his partner. “This is it!” they seemed to be saying, “no more Revelations for you!” 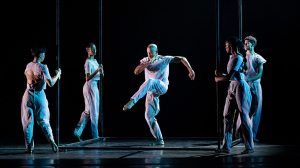