December with Mark Morris Dance Group (MMDG) often means Artistic Director Mark Morris’ comical take on the Nutcracker story in 1991’s The Hard Nut. It may have felt a tad odd to be watching a different MMDG program during this festive month, but any chance to see the famed New York-based company is always a real treat. Friday night was no exception. For their triumphant return to Cal Performances (and the continuation of a decades-long artistic exchange between the two institutions), the troupe brought a quadruple bill of works, past and present, all choreographed by Morris. And if you find the combination of contemporary dance and musical form entrancing, this program was for you.

First up, we had a fugue – phrase material interacting, motifs reappearing, patterns sped up and slowed down – everything independent yet interdependent in the same moment. This was Water (2021), the newest work of the night. Danced by thirteen and set to Handel’s Suite in F Major (performed live by the MMDG Music Ensemble), its choreographic sequences were in constant conversation and the movement never stopped. While the work did have a rather ominous opening – dancers backlit, walking slowly into the space – Water quickly gave way to courtly, joyful progressions, all with a hint of whimsy. Gallantly outstretched arms gracefully crumpled on exhalation. Classic arabesque lines met the strangeness of 2nd position attitudes. Hips quivered; boureés took on a casual, understated note. And though a fairly short group piece, Water set an exhilarating tone that would continue throughout the evening.

A foreboding quality was also present in the first seconds of the 2013 duet Jenn and Spencer. Karlie Budge and Brandon Randolph circled around each other, both with one arm raised. This time, that tension would continue until the lights dimmed. It was pure drama, reminiscent of a Greek tragedy, and the two dancers were like magnets that kept changing polarity. Attracted at one moment, repelled in another. Even when Henry Cowell’s score lightened up a bit, Jenn and Spencer was undeniably charged. Positions were equally intense. Arms reached into a high diagonal with palms splayed. Poses looked like they could have been at the front of a vast ocean liner. In fact, there were several nods to boating and sailing, including a clever move that found one dancer using the other’s legs like a ship’s steering wheel.

1998’s Dancing Honeymoon closed the first Act with ample nostalgia and cheer. Clad in retro, sunny yellow costumes (by Elizabeth Kurtzman), the cast of seven cycled through bright choreography, while vocalists Mary Sherhart and Morris himself, crooned a collection of 1920s/1930s era music. Swinging legs, lilting chaîné turns and flirty lifts solidified the old-school atmosphere. It was funny. It was romantic. It was happy. And, while there was no pool, it felt like watching a wonderful water ballet sequence from an old Hollywood movie.

The final work, V (2001), provided another opportunity to visit the choreography/musical form connection. This time, the structure that came to mind was the invention, a type of fugue where two voices are at play. V ‘s fourteen dancers were divided into two groups: half in bright blue and half in what looked like a light mint green (costume design by Martin Pakledinaz). Each group took their turn in a solo statement, and then it was time for them to dialog together. With parallel pas de chats, darting turns and sprightly leaps, the exchange between dancers seemed rich and full. Shapes were beautifully precise and the choreography matched Robert Schumann’s composition perfectly. Long lunges punctuated bright chords and little rises emphasized plucky scalic passages. With a title like V, it was also no surprise to see plenty of that letter onstage – in arms, in formations. Sadly a lengthy middle segment of crawling and walking went on too long and felt a little out of place. But as V reached its final third, its enchanting buoyancy returned. 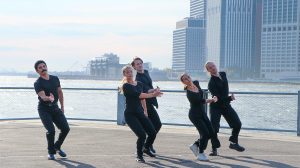