Rarely has a performance moved me as much as Poems and Tiger Eggs and dance was the least of the reasons for this emotional response; nor was I alone in this reaction. The young woman seated next to me shed so many tears that the house lights coming up revealed a tell-tale damp patch on her grey hoodie.

Dylan Thomas’ poetry is so affecting in any event: ordinary words that he strung together to create extraordinary rhythms and beguiling imagery. And the sonorous Welsh lyricism in the cosy voice of Cerys Matthews is the perfect instrument for their recitation; his phrases slicing the air like jewelled arrows, hitting bull’s eyes to power our imagination.

This live performance by Matthews has been the bedrock of Poems and Tiger Eggs, since its creation by Ballet Cymru’s artistic directors, Darius James and Amy Doughty (in 2017) and their anthology of some of Thomas’ best-loved poetry is sympathetically accompanied by the music of Matthews and Mason Neely, performed here by Arun Ghosh; seamlessly switching instruments between poems.

Despite the security of Matthews’ all-pervasive virtuosity, taking on a choreographic representation of Thomas’ poetry in the name of Wales must have been a Herculean task but James and Doughty have done so with sensitivity and flair; alternating interpretations of joy and poignancy, as appropriate. Their facilitation of a visible manifestation of Thomas’ great poems about death (Do Not Go Gentle into That Good Night and Death Shall Have No Dominion) were clock-stopping (the female duet in the former replete with an intensity of feeling) but, even so, the dance was the least of it.

Riddick is making a rapid transition from award-winning dancer (critics voted him the Best Male Dancer in 2017) to an emerging choreographer of note and his early work is being made in Wales, where he was born and started his dance training (at Coleg Gwent in Newport); inspired by Michael Flatley, no less. Earlier this year, he made The Three Sections for Gwent-based Ffin Dance and Murmurations is his first commission for Ballet Cymru, made to the music of another Welsh musical star, Charlotte Church; taken from her album, Three. The title brings to mind the amazing spectacle of a swooping mass of starlings in flight and Riddick’s choreography does well to create a stream of inter-connected swarming patterns amongst the eleven dancers. It’s a thoughtful and absorbing work that exemplifies Riddick’s musicality and his ability to move bodies harmoniously and at scale but such intricacy requires discipline from the dancers and they delivered without losing the naturalism that Riddick’s choreography required.

On the evidence of Isolated Pulses, Ballet Cymru’s new Resident Choreographer is an exciting find. The set is filled with large mobile mirrors, with which one of the dancers painfully clashed with an outstretched limb, and (later) chairs. Willis made the work – at a distance from his dancers – over lockdown and he brings an affecting sense of isolation even in the midst of a group. Although not explicit, it seemed a metaphor for the loneliness of single people trapped in lockdown, living a solitary existence while surrounded by a community of others in similar circumstances. It was also a work with several false endings; moments where it seemed likely to finish but tantalisingly continued into another section.

Isolated Pulses was made to an eclectic mix of pleasing music (composers ranged from Ólafur Arnalds to Handel) and it was such a rare pleasure to hear a programme of contemporary dance with an array of arresting and memorable music (and, of course, poetry) and not playing to the current trend of industrial machines at war.

Congratulations to Ballet Cymru for bringing such an entertaining and stimulating programme of dance to London; leading off with what must surely now be their signature work; reminding us of the great poetic and musical artistry of Wales; commissioning excellent new work from two talented young choreographers; introducing a strong group of dancers; and affirming that dance Made in Wales is in rude health. 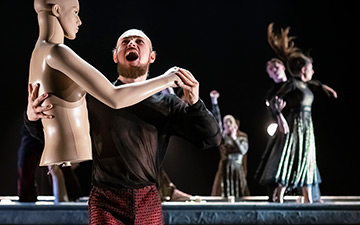 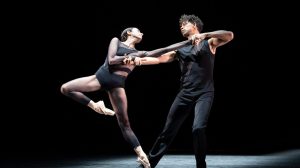