There are times when art meets the moment, and Pacific Northwest Ballet’s Beyond Ballet program is one of them. Tracing through lines from the AIDS era to the current pandemic, the triple bill touches on the tragedy and the sustaining power of human connection. Beyond Ballet was performed live (live!) at Seattle’s McCaw Hall 5–7 November and broadcast digitally 18–22 November. Even the recorded performance viewed on a laptop was deeply moving; I can only imagine how compelling it must have been in person.

The late, great Alvin Ailey dancer Ulysses Dove choreographed the opening piece, Dancing on the Front Porch of Heaven: Odes to Love and Loss, for the Royal Swedish Ballet in 1993. That was the height of the AIDS crisis and Dove himself would die of an AIDS-related illness three years later, at only 49 years old. He described the work as “a poetic monument over people I loved,” and it is an elegy in motion. Dove chose Arvo Pärt’s Cantus in Memory of Benjamin Britten for the score, and the mournful effect of its tolling bell motif is echoed by the ghostly white unitards worn by the six dancers and the downlights that shroud them in spectral shadows.

Dove’s movement vocabulary is deceptively simple looking – deep second-position pliés, backward bourrées, angular arm gestures, firm torsos that recall the planar aspect of Lester Horton and Merce Cunningham – and its impact is searing. Fleeting bonds, such as a hand placed gently into another hand, or a circle that remains intact for a few brief seconds, suggest a longing for connection while knowing that loss is inevitable or, as in the first wave of AIDS, agonizingly foretold. James Kirby Rogers and Christopher D’Ariano’s slow descent into tandem splits, with D’Ariano’s hand on Wald’s shoulder, exemplifies Dove’s weaving of technique and tenderness.

Commissioned for PNB’s 2020 digital season, Jessica Lang’s Ghost Variations is named for part of its piano score, Robert Schuman’s 1854 Ghost Variations, the last work Schumann wrote before he was committed to an asylum for mental illness. Nineteenth-century Europeans practiced spiritualism and communication with the dead, and Schumann believed that departed composers dictated the music to him from the grave. In an eerie coincidence, cholera pandemics were ravaging Europe, and the world, at the time.

Lang’s choreography seamlessly blends the scale and openness of neoclassical technique, the supple torsos and port de bras of Romanticism, and the angular floor work of contemporary dance. Like an Abstract Expressionist response to Jerome Robbins’ Dances at a Gathering, eight black-clad dancers come and go in vignettes of shifting relationships to each other, to the self, and to the music. Jillian Lewis’s cutout designs for the women’s leotards and men’s jackets imply fractured souls; the women’s long tutus float over their fully extended arabesques, then crumple as the dancers contract and curl down to the floor. The furling and unfolding of Wald and Elle Macy’s final duet evoked a waltz between sparrows.

Alonzo King choreographed The Personal Element for the Vail Dance Festival, creating the movement on dancers from New York City Ballet and his own company, LINES Ballet. The piano score is by frequent King collaborator Jason Moran. King’s choreography looks different when not embodied by the ultra-tall, infinitely long-limbed LINES artists, so while it includes some of his signature swoops and arm swirls, folding torsos and extending limbs, Element reads more contemporary than extreme.

Element feels unanchored to a specific feeling or event, but it offers an antidote of sorts to the program’s somber mood. King channels a thriving life force through his movement, and the piece’s warm lighting and diaphanous costumes brighten the stage. In the work’s PNB premiere, Amanda Morgan and Lesley Rausch channeled the alchemy of temporal and metaphysical that is the essence of King’s work, conveying a searching immediacy as they watched their fingers float before their eyes. That quality of beginner’s mind brings us back into the present moment, tragic as it sometimes is, and strengthens us as we move toward the ever-uncertain future. 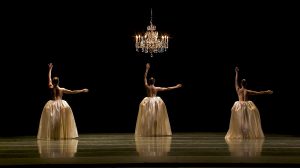