Cullberg Ballet’s new artistic director, Gabriel Smeets, declares that he wants the company, founded in 1967 by Birgit Cullberg, Mats Ek’s mother, to present dance as a 21st century art form. In Jefta van Dinther’s Plateau Effect, the emphasis is on visual art as the motor for movement. The choreography is determined by the need for co-operative effort in manipulating unpredictable swathes of fabric – a metaphor for mankind’s attempts to control the forces of nature (and ourselves).

In the first of three scenes, nine dancers stand in a row in front of a billowing curtain, folding themselves in and out of it, while lip-synching to an unintelligible song. Lighting effects make the huge curtain resemble a volcanic ash cloud or the Northern Lights. David Kiers’s electronic soundscore takes over as the silken fabric is dismantled by the dancers and replaced by canvas and cables under bright neon lights. A woodchip wall occupies the rear of the stage.

Working rhythmically together, the performers in everyday clothes (and knee pads) haul on the cables, pulling the unwieldy canvas into impermanent sail-like shapes. Like the material, the dancers rise and fall, twist and tumble, making knots of themselves and the fabric.  Their upper bodies torque and reach, their feet never leaving the ground except to step over obstacles. This is evidently a Sisyphean task because they are destined never to erect a stable structure. Combined with disorienting strobe effects, their actions are both practical and pretentious. Contemporary dance tends to take itself terribly seriously.

In the last scene, the intractable canvas sheeting is rolled laboriously into a rope in slow motion, accompanied by pulsating, trance-like thumps and tinkles. As the bundle snakes around, we are evidently meant to ponder whether the dancers are controlling its contortions or improvising their responses to it and each other. In the final moments, music blaring, they break free and confront the audience, panting in what seems pride in their achievement. Maybe this is what long winter nights do to northern sensibilities: you have to keep striving against futility and endure impermanence. Or, for just an hour of your life, you could contemplate art in motion without trying to interpret it. 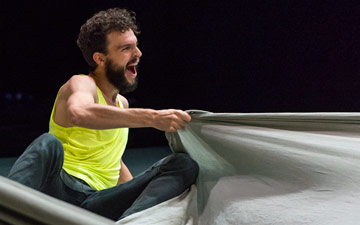 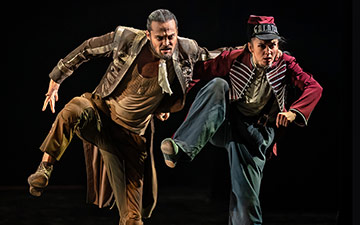 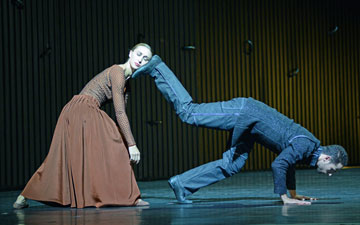